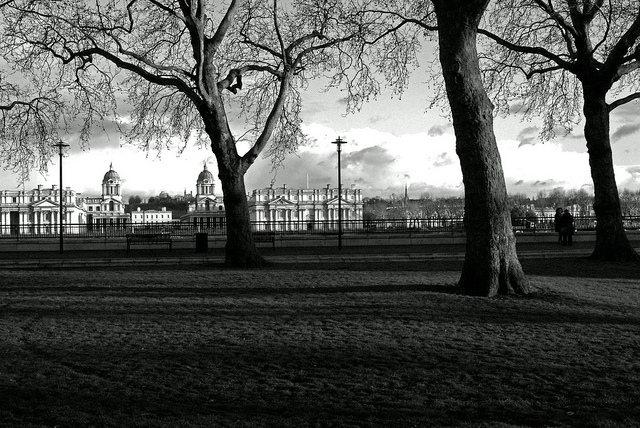 Continuing our series of short fiction set in, or influenced by, London. This week’s story, of a fear of fishy creatures, is by R.B. Stewart.

My life was transformed by second hand meditation.

My mother meditates, though how such a fierce woman manages that I don’t understand. She suggested it to me since I have a lingering trauma from a childhood incident. I rarely discuss it since people usually find it amusing, as if I would joke about such a thing, but small frights can grow into large phobias, manifested in nightmares.

Mine goes back to me as a toddler standing knee deep in a pond, fat toes wiggling in sticky mud while glistening little fish flitted around my knees, chasing the bread crumbs tossed by my grandmother. A charming scene, until the big fish barges in to get her share. The wobbly child takes a fright, tumbles down, gulps some water, sees a great eye and a gaping mouth.

A nightmare was born, and for years, she watched me in dreams, always from the gloom and shadows.

For obvious reasons, I don't often tell that story. I don't swim. No eating fish if they leave the head on. Never had a goldfish. All of this because a great whale of a carp came too close.

Now I live on the Isle of Dogs, surrounded by London and the River, but protected from the water's edge by the rail at Island Gardens near my home. I don’t go alone, taking with me my dear violin.

Viewed through a high-flying satellite, my park sits beside the Thames looking like a green bit of Greenwich has broken away and drifted off like an iceberg from its mother glacier. There is a tree with branches that reach like the waving arms of a voyager leaving on a crossing. They wave at Greenwich, from which my park and voyaging tree departed.

When I go there, I sit on the bench near the rail and the River, while a Meditator sits serenely beneath my favourite tree. An older lady with hair simply restrained. It flows down her back like a vestment as she grooms her Karma. Even my own riotous red hair, my mane, cannot distract her from swimming in the unseen universe. I imagine her drawing all manner of positive mysteries into herself from the tree and the world more broadly. I imagine as well that it flows back out again, purified and properly sorted.

So I sit on the bench nearby and let it flow into me and into my violin.

I’m a violinist by trade and quite good, though unknown. We are legion — the quite good but unknown. It comes from quiet application and years of pressing from my relentless mother. I can’t imagine doing anything else. My mother can imagine me doing this but at a more glorified level. We all have our little dreams. Mine are nightmares, bred of fish encounters, as I’ve explained.

E. Winterborne is how I bill myself. The E is for Emma. You may have seen my name in the credits for a minor video game, but probably not. A touch of violin needed here and there. Maybe playing at a wedding, though usually not the larger sort. Once, I played a short piece to accompany a breakup video. Such a tasteless man, but at least he paid.

Given the lack of lustre on my career, I come to my park to perform. As I mentioned, I sit on the bench with my violin beside me, and we each absorb the radiance from the lovely Meditator beneath our gesturing tree, not paces away. When she has sufficiently enlightened herself for the day, she departs. That is my cue to perform, and I compose on the fly, guided by inspiration. Well, I’ve caught myself ripping off Beethoven or similarly dead geniuses but they can haunt me if they like. How bad could that be?

My violin and I play out what good vibes we’ve drawn in. We send it out to tickle a passing boat or skip across the River to wash the face of Greenwich. A great gig. A great venue and almost never a critic — except for that damn terrier. Except for him, there is always some bird or beast that draws my attention and that signals the end of my impromptu concert and an informal dedication to that creature. A squirrel one day, a gull the next. I turn a blind eye to cats, as they do to me. Cats and that damn terrier.

But today was special.

Today the music flowed so transcendentally that I wondered if our Meditator had achieved some cosmic breakthrough, or left, not for home, but to escape the bonds of earthly existence altogether, assuming that’s a desirable outcome. I believe, from limited research, that it is.

Yet no one was about. No one on a bench or prowling the lawn. Nothing in the trees. No passing boat. As if a very tidy apocalypse had occurred while I was distracted, sucking every living being up and away to wherever and leaving me in sole possession of a city that I love but could never maintain without help.

The breeze fell away. And that is when I heard it; a wet and rude sound, like someone going after the last of the soup without aid of a spoon. I looked over the rail to the river and saw her there. (I say her, but who can judge the gender of a fish in water?) Such a huge fish! Its head as big as mine. Its eyes bigger and seemingly fixed on me.

Having my full attention at last, it tipped itself just enough to raise its mouth full above the surface, and it blew me a kiss or whispered silent thoughts my way.

Thank you Meditator. Thank you my dearest violin. And thank you, whatever and wherever you are in the Thames.

Twenty years after a childhood dunking, I've made my peace with the fish.

Got any more stories about London’s green spaces? Send them to fiction@londonist.com. Entries must be no more than 1,000 words, and must be set in London, or strongly inspired by the city. Full details here.