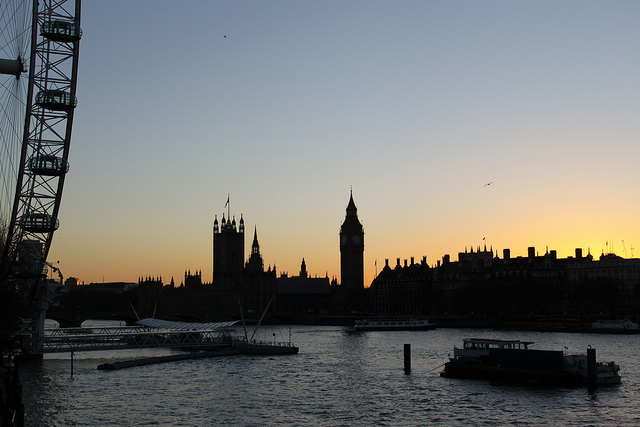 Continuing our series of short fiction set in, or influenced by London. This time, Susanna James races against the dying of the light.

It was the afternoon of October 27th, the first day of British daylight savings time. An impending sense of urgency ran through me throughout the day; a strange twitch in the core of my brain informing me that night was falling sooner, danger was coming closer, and I needed to move.

I ran along the Thames most evenings, and during the summer had enjoyed the twin delights of light and, for the most part, warmth with my journey. Today would be different. The idea thrilled me, yet made me apprehensive at the same time.

Change didn't sit well with me. I often experienced irrational concerns that minute changes in my daily routine would cause a knock-on effect that would skew my comfort irreparably and, to some degree, also my sanity.

Perhaps my sanity had already been skewed years ago by an irreparable change that led me to feel this way.

Regardless, I found running to be my one constant. The pure act and motion delighted me in its consistency, the steady thud thud thud thud of my feet pounding the ground, matching my heartbeat and my heavy breathing. A sense of unity in this shared rhythm calmed me.

I set out at my usual time; I knew that I wouldn't make it to my destination before sundown. My unease disturbed me more than the idea of running in the dark, and I chose to ignore my urge to give it all up for the winter. This would, in itself, be a change I couldn't cope with.

Running is perhaps the most liberating activity one can do. Far from being lonely, it's a peaceful release, a rare opportunity to truly feel alone no matter where you are.

In a city of eight million, I couldn't give that up.

I set out along my usual route, westward from Tower Bridge along the north bank of the Thames. It was already nearing sunset. The air was thick with pink light.

Street lights had already started to switch on from buildings along the south side of the river, and I could make out the disjointed tip of the Shard faintly back-lit in yellow.

Urgency filled me as I passed under London Bridge; I spied Blackfriars ahead with the blue of the station already beginning to reflect in the river below. A bus bellowed as it passed over the bridge above me and I sped up, eager to out-run the sunset.

As I approached the steps at Blackfriars Bridge, the pink mist had faded to grey and I was unable to make out the faces of the pedestrians that walked towards me. I ran up the steps and emerged, exposed, atop the east footpath of the bridge. Red taillights trundled past on my right as I powered over the bridge, and the flashing lights of bikes weaved past as I ploughed on, avoiding the hip-height barrier that stopped me from falling into this artery of the city.

I chanced a peek over the balustrade and noticed a small motorboat pass by, travelling westward like me towards the last scraps of light on this winter evening. I quickened my pace, reminded of the urgency of the journey.

As I skipped down the steps on the south side of the bridge I realised it had arrived.

It was dark under the bridge and lights along the footpath held the strongest glow in my field of vision. A glance skyward revealed a streak of red so bright it made me catch my breath, like the belly of the sky had been butchered. I caught sight of the motorboat again — my companion in our race against the planet’s rotation.

I squeezed through the brightly lit alleyway at the foot of the Oxo Tower and was surprisingly jarred by the imitation of day that flashed for all of 15 seconds until I emerged in the dark of the South Bank.

My eyes adjusted to the luminance, soaked in a new view of the city.

Across the river I spied the illuminated fascia of Somerset House; a marvel of Neoclassical architecture, a bright white bulb of magnificence reflected back in perfection by the water. I wondered if I had ever appreciated it as much as I did at that moment.

I slowed my pace as I jogged beneath strings of light between trees along the South Bank that highlighted a gentle glow atop the heads of pedestrians and fellow runners that followed my route. We seemed to be travelling as one, migrating slowly towards the last known sighting of the sun.

Everything I could see was illuminated by artificial brightness.

Individual colours, shapes and movements of light overwhelmed me and caught my attention as I glided by, slowing my progression towards my destination, but I didn’t care. I was no longer in a hurry.

I had lost sight of the motorboat; my companion was gone, but I didn’t miss it.

Instead, I felt a strong sense of awe at the changeover I had witnessed. Not just the world changing from day to night, but the parallel adjustment of the city, my city. Transforming as naturally and gradually as the sunset.

As I reached the steps at Waterloo Station my deep unease had almost completely lifted.

I entered the brightness of the station and turned back for one final look. “Until tomorrow,” I thought.