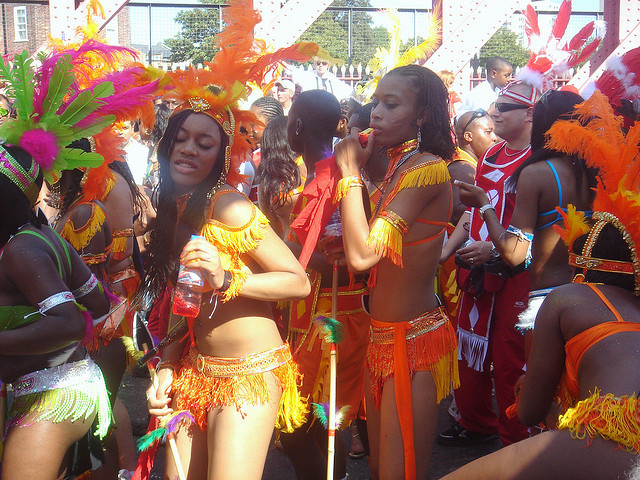 Continuing our series of short fiction set in, or influenced by London. This week, Angela M. Rodriguez steals a very personal item and then wears it at Notting Hill Carnival.

One Summer in London

“Do it.” he said encouragingly. “I dare you.” His eyes glared and he flashed a wicked smile. Old friend indeed. “Suppose I get caught, then I shall be imprisoned or fined or something awful might happen in which I shall face undue humiliation and regret. It would be your fault, of course.” I added. He laughed and sipped his drink, carefully setting it down. “So? It's a proper dare and a man of honour such as yourself would be obliged. Just like university.” Ah yes. The memories came flooding back of endless drinking and stupid pranks and now we were grown middle-aged men with careers. He had dared me to do something unspeakable. “I can't.” I stammered gulping down my drink hastily and looked at my watch. “I must run, I have important...”

“Nonsense!” He bellowed loudly. Complete and utter rubbish. You have lost your nerve, that's what. Gone the way of sensibility and paved your way to being a stale old fart.” I hated it when he got that way, drunken lout. “Alright,” I said calmly. “I'll meet you. But should anything horrible happen, it lies entirely on your head, including the fine.” He roared with laughter and motioned for another drink. “I knew you would do it. There is hope for you yet.”

The next day I had lost my nerve, rationalizing that the way of the coward is far better than reckless drunken dares. Still, I managed to collect myself and take a long walk in the summer heat, which ended in front of an auction house. I waited impatiently and my friend strolled up in that smarmy way of his, grinning ear to ear. “Make up some excuse. Go on, you are good at that sort of thing.” He looked at me expectantly. I stared at him and stuffed my hands into my pockets. Then I made my way to the entrance.

A receptionist stared for a moment and asked, “Pardon?” A lie popped into my head just that instant. “Please direct me to the inventory of items to be auctioned. I am here to organise,” I said authoritatively. She nodded, pointing to the back room. I walked quickly through the hall and found a large room filled with boxes and lots of old things which had been stacked into neat piles.

I rummaged for a long time until I found the item I was looking for. I held it up to the light noting the size, and finally knew what her secret really was but I can't say it just now. Then I balled up the object of my affections and stuffed it beneath my shirt, wondering if anyone would notice I had spontaneously grown fat. In silence I strolled to the front and passed by the receptionist. “All in good order!” I shouted, saluted, and rushed out the door. I doubt she noticed anything, as a child had spilled a large drink on the floor and there was quite a commotion and cleaning up. I met my friend and we quickly walked, looking over our shoulders every five seconds to make certain we weren't being followed. After a long and weary walk we sat by a fountain, where small children were playing, and tourists were photographing everything in sight. It was a nice, crowded place to stop for a moment and rest.

The sun beamed down on everything and I felt a trickle of sweat run into my eye, or perhaps it was just nervous perspiration. Wiping my forehead, I pulled out the purloined item and my astonished friend whispered reverently, “I can't believe you did that. Oh the glory of it all. You sir, shall make history.” Just then, I saw policeman pushing through the crowd pulling people aside. I tucked the object inside my shirt once more. “There is but one thing to do,” I said hastily. “Run.” And so we did. We ran as fast as we could that hot summer day. Through the parks, hiding behind ice cream vans, riding buses, running faster and faster with the fear of being arrested.

We made it all the way to Notting Hill Carnival, where there was a gleeful crowd and parade with people dancing in the streets. I pulled my friend through the crowd until we went to a side tent where some attractive ladies were dressing. A girl looked at us askance, she was painted all over and had a feather headdress. “You here for the parade, mate?”

I nodded slowly. My friend piped up readily. “Yes. We would like to dress in the ladies costumes.” She laughed. “Aw, bless!” The girls were very nice about all of it, and lent us bikini tops and painted our faces. I put on the item I was hiding as part of my costume. I had no choice, I couldn't leave it in the dressing tent. No one seemed to notice anything unusual.

Soon, we were directed to a float. I had noticed a group of coppers milling about the crowd, but thankfully we seemed to blend in. Frantically we danced and waved to the beat of reggae drums as the float slowly rolled through the street. At the end, we jumped off and danced through the crowd, and somehow managing to stay late into the night, meeting all sorts of nice people at the after parties who assumed we were much more than partners in crime. It was all terribly exciting and good fun, dancing until early dawn with our headdresses askew and face paint smeared.

Then we went to the tents and changed into our clothes. I had taken off the item and folded it under my shirt again. Not being able to wash off the face paint we looked a sight, all bleary eyed and hungover in a walk of shame sort of way. Somewhere down a road we stopped at a newspaper stand, laughing as the newspaper headline screamed “Who Stole Queen Victoria's Knickers?”

That concludes our London short fiction stories based on the theme ‘Summertime’. But please do continue to send your general submissions to fiction@londonist.com. Entries must be no more than 1,000 words, and must be set in London, or strongly inspired by the city. Full details here.