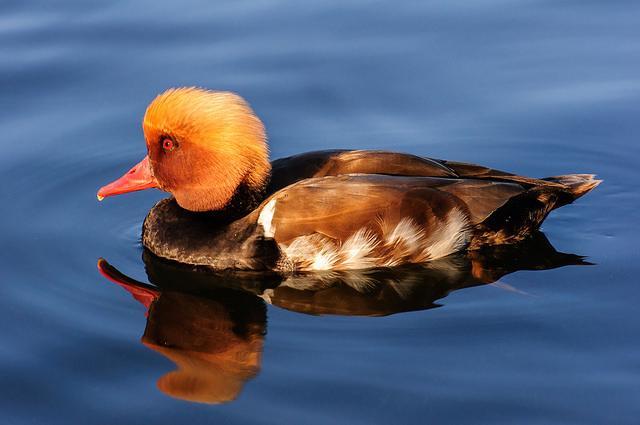 Continuing our series of short fiction set in, or influenced by London. This week’s story is by Andrew Lemming, who recommends caution should you ever be approached by a talking duck.

“You look a bit glum,” said the duck. Derek Flatterly studied his stash of lager cans. There were two possibilities: either the drink was stronger than he thought; or, he had been throwing chunks of a stale sandwich at an actual talking duck. In the end he decided it was the sign of a nervous breakdown.

He characterised most bad days as a mild headache — nothing he couldn’t banish with paracetamol and a walk in Regent’s Park. Today, however, was a full on migraine followed by a punch in the kidneys — or should that be a knife in the back. He was a risk taker. There were going to be times when investments came good and times when they didn’t. Thanks to his connections and a little insider knowledge, his hunches usually fell in the former category. However, whistles had been blown by a disgruntled employee and the authorities answered. His employers needed a whipping boy and thought: “who better than Mr. Risk Taker?”.

“Bread me,” the duck demanded. Derek shrugged and tore off a crust. “Want to tell me about it?”

“Hearing voices is one thing — that just means I’m slightly mad. Having a conversation with an imaginary water fowl is up there with people who think they’re washing machines and eat socks (no offence).”

The duck pecked him. He was surprised to find it actually hurt.

“That should give you a bit of a clue that I’m real.”

“Derek.” He found himself offering a hand to shake. Helen glared at him until he retracted it. “So, you’re a talking duck. How is that working out for you?”

“Technically yes, but I’m not allowed to talk about it. I’m more interested in you. Rough day?”

“You don’t know half of it,” he mumbled.

“Would three wishes help?” she asked.

“You’ve shown me kindness so I‘m allowed to grant three wishes. It’s explained in here.” She rummaged under her right wing and brought out a leaflet entitled ‘You Have Three Wishes’.

“You serious? I mean there’s no such thing as magic.”

“I am a duck. That talks. What more evidence do you need: turning all the creatures in the zoo over there purple?”

“You want these wishes? Because someone over at the boating area gave me some of her cake and...”

“All right, I’ll take the wishes.”

“Because a breach could result in forfeiture of wishes and other... consequences,” she said. “I’m just going to head over to heronry for an hour to give you time to go through the information and come up with three wishes. You might also get me some more bread — just a thought.”

Helen waddled into the lake and paddled away. Derek plucked a fresh can from one of the packs and leaned back on the bench. Booklets, brochures and newsletters were for budgie cages and recycling bins. He tossed it over his shoulder and took a swig. By the time Helen returned, he had worked through three more tins.

“Read the booklet?” she asked. He nodded. “Any questions?”

“I thought you said you read the booklet,” said the duck.

“I only ask because wishing for more wishes is expressly forbidden. In fact it is in bold and underlined three times. Sorry, that means you lose a wish.”

“Next?” She shook a few drops of water from her wings.

“All right! I wish that I win the National Lottery — triple rollover and everything!”

“Nope, can’t grant that one either.”

“Why not? I could give some of the money to someone I love or someone I hate. That’s one of the conditions right?”

“Damn it!” Tears formed in his eyes.

“Last wish — and you might want to think this one through.”

“Just get me my old job back.”

“Is that what you wish for?”

“Yes!” he howled. At once his stomach tightened with an intense cramp. He tumbled forward scattering empty cans. Writhing, he felt himself shrink into his clothing until they completely swathed him. He tried to wrestle his way out only to find his arms had become wings.

Someone freed him — a woman naked but for a light coating of downy feathers which shed in the breeze. She dressed herself in the shirt and trousers.

“Helen?” he quacked. She gave an apologetic smile and nodded. “What just happened?”

“Again, it was in the booklet,” she said. “The last wish is forfeit. As none of your requests complied with the terms and conditions, I change back into a person. You take my place. You might want to read this.” She rummaged through discarded feathers until she found a leaflet entitled ‘What to do if you become a Duck’.

“This isn’t happening! You can’t leave me like this!”

“With any luck you’ll find someone who will accept an offer of three wishes,” she said. “You just have to hope they’re as selfish and self centred as you.”

We’re still after your stories — particularly about London's green spaces — which you should send to fiction@londonist.com. Entries must be no more than 1,000 words, and must be set in London, or strongly inspired by the city. Full details here.