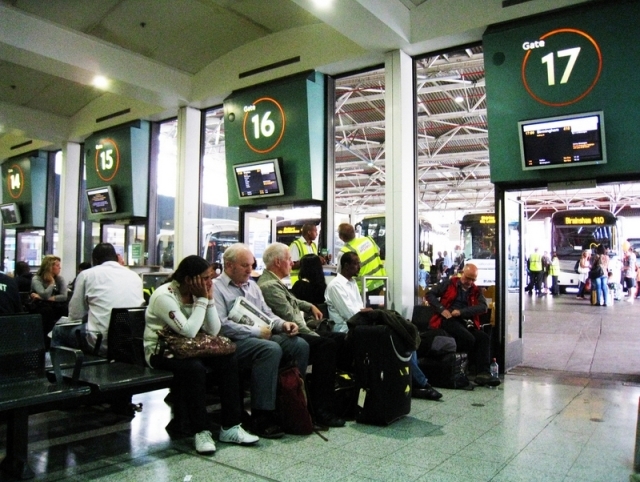 Continuing our series of short fiction set in, or influenced by London. This time, Victoria Coach Station passengers take the advice of a sage.

The Guardian of Travellers

With bags under their arms and bags on their backs and bags under their eyes, the travellers come to him. They stumble, trudge and tumble towards the sign over his head which reads, in letters way wider than his shoulders: Victoria Coach Station — WELCOME - INFORMATION.

Where is Victoria train station is it long long way from coach where is Underground? How do I find Queen Hotel? Which Metro line for M&M shop? Where Kew Garden? Where Angus Steak House? Where is passport? Where is JOB where is my brother I tell my brother meet me Victoria Coach Station where is LOVE?

If he is waiting for someone else to return from their break so he can go on his and his was meant to start 10 minutes ago, if he is bursting for the loo or a custard cream or a Nescafe Gold, or a quick scroll of his phone; if he is desperate for a few minutes alone, just so he can finally shake that last argument with his girlfriend out of his head; if a fortnight of night shifts and afternoon shifts and some other dark thing he can’t name, are weighing him down; if the security guys have just dragged away four drunk lads who kept calling him gaaaay and spitting at his face, he will shrug. He will stare, his face no more communicative than the dirty tiled floors, and point at the rack of leaflets by the taxi rank.

If, however, his belly is warm with custard creams and Nescafe Gold, he will smile (but not too wide due to the brown splodges on his teeth which are growing every day). He may, if his cup of Nescafe was particularly strong, stand up. Left, left, left right, he’ll say. When the travellers’ faces knot with despair and worry, when the tears well in their eyes, he lays his hands flat on the chin-high desk that divides him from them and makes the noise his mother used to make when he would seize up with terror at imaginary monsters.

I know these streets like the back of my hand. Pull your case towards Costa, turn right, cross towards the white boards with the photos of the buildings they haven’t built yet on them and carry on across the grass. Breathe. Say hi to the pigeons — but not too loudly: they may get excited and crap on you. If they do, don’t worry; your hotel is the big silver building glinting at you from the other side of the topless buses on the other side of the road.

With every traveller comes an opportunity to rediscover the city — never mind if some, sometimes all, of the details are what most people would consider to be made up. Ride the 44 bus to the second-to-last stop and you will find the job of a lifetime. Don’t miss the cronuts in Giuseppe’s Deli, West Brompton Road. The gargoyles on St Anthony’s Parish Church in Camberwell are deliciously gruesome, and the pub round the corner does a decent roast, too. There are elephants in Trafalgar Square tonight — one night only! Tomorrow, they’re getting the Megabus up to Grimsby. There is a fortune teller in an unnamed patch of grass way up the Caledonian Road. He will squint at you for a couple of minutes then for free — but you have to ask. There are raves in every second basement in Mitcham. There are stars painted onto the toilet floor in the dentists at Kennington. Some would say he is mean; others would say he is mad. He would say he is just pulling out the city that is already there — the real city, just below its asphalt surface. (Although he can admit he has done more than the statutory maximum number of night shifts this month).

The lost travellers nod and blink, unable to absorb more than a few familiar words — ‘and’ ‘if’ ‘road’. And yet they smile; they loosen their grips on their front-to-back-packs. 'Thank you', they say, even if they’re too tired to nod their heads.

As he watches them melt into the 3am floodlit darkness, he knows he has given them at least one good thing to write/text/email/Skype home about. If he can be the one good thing in a fellow human being’s long, bad, difficult, day, he is glad.

But this is not how he spends the night shift, oh no; he spends most of it watching the creatures who waft through the automatic doors, so skinny and scrappy and hollow-eyed, that he often fails to see them until they are folded into some corner, limbs as tight as origami. The security guards don’t see them either, or if they do, they don’t move them on; these people have lost too much muscle and fat and money and bags on whatever kind of journey it is that they’ve been on: you can’t be a threat to anyone if you’re not really here. He wishes they would come over and ask him. Ask him anything. Ask him why. Ask him how. Ask him if he can make it better. They never do, though. They never do.

We're also now looking for short stories both for and by children.