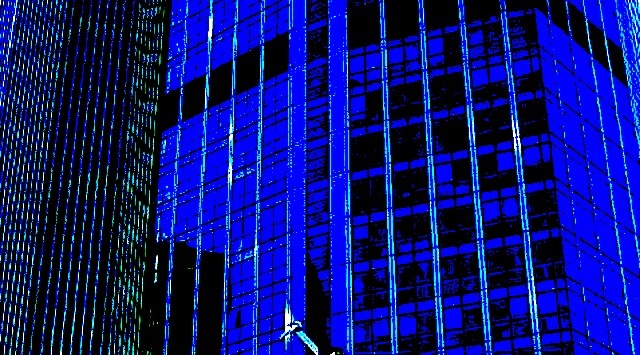 Continuing our series of short fiction set in, or influenced by London. This week, Oliver Zarandi visits the site of a bomb.

The book is finished, more or less. Riding the elevator to the top floor. Penthouse. Trying to find an ending to the book.

Arthur Adler, his name. One year’s time, forty years old. For now, thirty-nine, the very antithesis of his younger self — the 'blithe spirit' of the Peckham writer's circle — and looking gaunt (antique, almost) in clothes too big for him, his face pinched and ungenerous.

Years, the book had taken him. Changed him, irrevocably. Dietary requirements changed from salads, pomegranate seeds, herbal teas to the bodily inundation of carbohydrates and coffee.

The book's subject matter, different. Last book actually a series of books charting the rise and fall of a Georgian-era family. A roman-fleuve. No money made.

His house: a small townhouse, uncomfortable bedfellow in Camberwell, sandwiched between upper-middle class denizens and the 'others'. Used to live in a kitchenette, he did. Was a sumpter for his wife. Consistently ill. Wife frequently pinched his bicep with thumb and forefinger. Derisory comments made. Adler commonly referred to as a weakling, a chicken heart. Once contracted pneumonia, lungs filled with water and regret.

Adler was American. Born in Wisconsin to a loving mother and an indifferent father. His father looked like a slab of beef. He had peppercorn eyes and a walrus-moustache. His mother looked like a fork. Fascinating history behind this man, the writer. Once had a wife called Barbara. Work (a piece of) she was, according to Adler. Her face was shaped like a grape. They were married for two years, divorced for ten years and she had been dead for one year. She died from a pulmonary edema.

The elevator is made from glass. I can see the city from up high.

Adler’s book was a fictional account of a woman whose husband was killed in the Bishopsgate bombing of 1993.

The book is mostly concerned with violence and sex. The woman begins a relationship with a terrorist, reconstructing her dead lover through a series of miniature theatrical plays which she performs with the terrorist.

Plot holes, infuriating. Hopefully Mary will be able to mollify such feelings.

A woman similar to that of his fictional creation. Her name was Mary Peters. He found an interview tape of her. She was also known as four minutes, twenty-three seconds. He would watch again and again, pausing the videotape, pressing his face into the library television. The television was old. Cathode ray tubes. The closer he got to the screen, her face transformed into lines of green, red, blue, yellow.

His late wife appalled to find drawers a glut with antique medical books. Underneath his writing desk, a genuine 19th century Knee Cap in solid leather for a fractured patella. In a box, next to the desk, the now-dead wife was confronted with an Allingham Haemorrhoid clamp (nickel plated). She blushed and put the box away. She left the room and thought you can never really know anybody.

He carries a case fashioned from mahogany, polished throughout – an amputation set. Inside: an amputating saw with movable back, a Liston’s amputating knife, a catlin, a finger saw, a scalpel, a pair of artery forceps, a pair of bone forceps, Petit’s tourniquet, a tenaculum (used for arteries), metacarpal saw, two dieffenbach’s, aneurism needles, some redundant cyst forceps, needles and ligature silk.

Mary Peters lost her legs in the Bishopsgate bombing, April 24th, 1993. One man died in the attack. He was a journalist. He ignored the police warnings. The bomb detonated. Buildings made from glass, shattering. St Ethelburga's church damaged. Now a centre devoted to community reconciliation projects and building relationships between people affected by conflict.

Adler is greeted by Mary at the door.

Odd: her khaki coloured skin. Looks like it was flayed then stapled back on. Her arm, too. Wolf-Hirschhorn syndrome?

Adler steps through into the apartment. It's lifeless. The living room, the kitchen, the bedroom are all contained in one large, open-plan room, divided only by shoji screens. The apartment overlooks the area where she was injured by a bomb.

She asks Adler if he'd like a drink. He nods. Make it a vodka. She wheels herself into the kitchen and slides the shoji screen back. He can see her silhouette against the screen; can hear the clink of glasses, the roll of a clumsily dropped bottle cap.

He takes a look around the living room. A small glass table, next to a sofa. On the table, pharmaceutical cocaine. On the coffee table — in front of a large, flat-screen television — a notepad. He takes his talonesque fingers and leafs through them:

She comes back into the room with a tall glass of vodka. A lime is delicately biting the rim.

She says: set up the equipment. And please, ignore the list of terrorist attacks on the table. It's not exhaustive. I didn't even mention the black panthers or the effects of chlorine bombs on Iraqi children who are no larger than my ironing board.

And then Mary tells him to remove his clothes.

Adler nods. He begins undressing. He feels like the novel he started is about to gain an ending. He opens up his case, removes a tourniquet.

He doesn't know what to say.

What can you say?