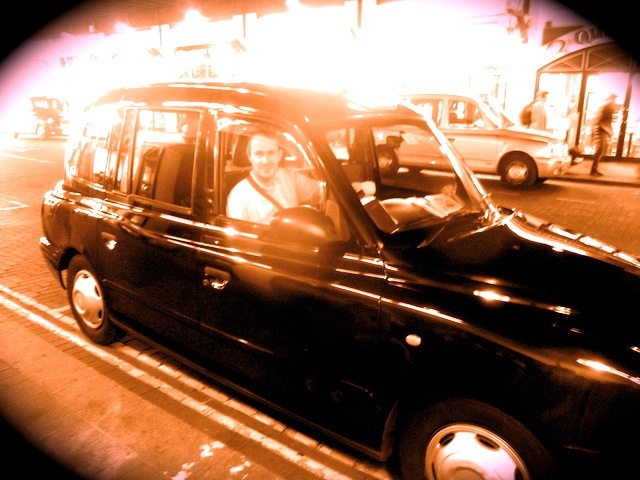 Continuing our series of short fiction set in, or influenced by London. This week, Anthony Fitzgerald tells the tale of a cabbie's partner.

“I dunno know why he did it. He’s usually so placid. Well, y’have to be, don’t you? Stuck in that cab all day trying to make a living, hemmed in by glass and perspex on all four sides. He always says it makes him feel like a goldfish.

“The punters. He says they would drive you mental. The city boys treating you like you’re their chauffeur; the know-it-alls accusing you of going the long way to get a bigger fare; the tourists who hold you up looking in their guide-books for the place they want or trying to put the fare together from a fistful of unfamiliar coins; the couples — usually married, usually not to each other — feeling each other up in the back while you pretend not to notice what’s going on; the drunks with their burgers and their beery, smoky breath, dribbling and farting and puking like giant babies. It would try the patience of a saint. I used to laugh when he came home and said his job would be easier without the customers.

“One of those shitty cold November days when it never seems to get properly light at all. Raining all day, the windows steamed up, the wipers going squeak squeak squeak all day long. Usually he’d be delighted with a bit of rain – everyone wants a cab, no-one wants to walk nowhere. Especially the leggy girls in their posh heels. He loves a bit of that in his mirror, doesn’t have no shame in telling me either, the saucy sod.

“He’d taken a fare out to Wapping and was trying to get back up to the City. The bridge had gone up, he said, and the traffic was murder all round Tower Hill and all the way up to Aldgate, stopping him from getting anywhere. Why the bloody hell do they open the bridge in the middle of rush hour to let posh boats and sailing ships through? Something to do with the tide, he says; no choice about when they do it, he says. Seems bloody daft to me, it’s supposed to be the 21st century.

“Stuck there on Prescot Street he was, jammed solid because of that bloody bridge, just a few yards from being able to get on to Mansell Street where the bus lane would let him make some progress and get away from there. Nothing was moving, only the couriers with their ratty old motorbikes zipping up the middle of the queues of traffic.

“He nearly made it but the big white box-van in front stopped again as the lights went amber, he could easily have got through before red. No cameras on these lights anyway, so he could have gone through after red – everyone does it nowadays. But he was stuck behind this van. So he leaned on his horn, New York style, just making a racket to relieve his frustration. Except it was pathetic, the horn on its way out and full of damp from the cold wet winter air so it just made a weedy low parp that barely caught the attention of the pedestrians crossing in front of him.

“At last, green again. A gap. Go. But just as he moved forward a cyclist appeared from nowhere and shot right across in front of him, turning and swearing and beating a fist down on the bonnet. He slammed on his brakes, now it was his turn to have the cars behind tooting angrily. Of all the times to nearly hit a cyclist: the Standard full of them for the last two weeks going under lorries and dying; Boris defending his stupid blue-paint bike-lanes and his hire-bikes full of helmetless wobbling amateurs.

“He said he just saw red. Had a fit of rage. Jumped out of the cab and hared off across the pavement after the cyclist, shouting and swearing. He even left the engine running and the door open and his bag of cash under the seat, the bloody idiot. Caught him and hit him. Can you imagine? After all these years of driving a cab, bloody well jumped out and lamped a cyclist.

“He said the bike went over and the cyclist was on his arse but got up quick and threw one back. Next thing the two of them are scrapping like boys in the playground, arms around each other’s heads, whirling around, wrestling more than boxing but he said he got another one in and put the cyclist on his arse again.

“ ‘Course, suddenly there’s a crowd trying to break it up. Blokes in suits, women in raincoats; shouting and pulling; umbrellas and bags and backpacks getting in the way while they tried to separate them. He said he was bellowing at the cyclist to get up again when this massive bloke – a builder – grabbed him in a bear-hug, all brick-dust and sweat and lager in his grubby hi-viz vest. Practically picked him up and shoved him back towards the cab while the crowd around the cyclist got him to his feet and gave him a tissue for his bloody nose.

“The builder pushed him all the way back to the door of the cab, putting his arms out, stopping him from going after the cyclist again, shouting at him to calm down. He sat back in the cab, the traffic swirling around him, horns blaring, angry faces mouthing curses at him for his one-man traffic jam. He closed the door and drove off, one last look back at the crowd around the cyclist, didn’t even bother checking his money bag was still there until he got his next fare.

“The police came this morning. Gave him a right ticking off but said the cyclist didn’t want to take it further, he’d admitted being as much in the wrong for hitting the cab. I hope the PCO will be as understanding. Otherwise he might get his wish to have no customers, no bloody badge for that matter.”