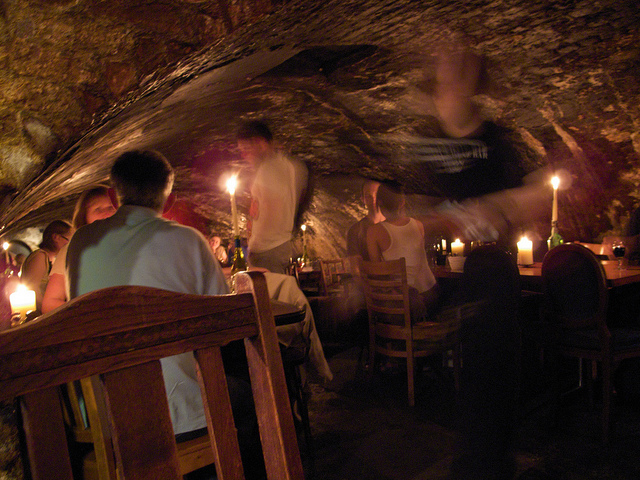 Continuing our series of short fiction set in, or influenced by London. This week, Kevin Acott goes on a time-shifting pub crawl.

Walk out the main entrance of Waterloo station, down the steps. You'll see the Hole In The Wall across the road. I'll be in there, it'll be 1994, there'll be ten Rothmans and a bag of salt ‘n’ vinegar on the table in front of me, some football match roaring on the telly in the back bar. We'll have a pint.

Leave me in the pub, head for the river. Out on the chill, snowswept terrace of the Royal Festival Hall you'll find me with a glass of wine and a far-too-beautiful woman. Don't look her in the eye. Ask her about her latest play. It'll be Christmas, 1972.

When you're bored, cross the river. Walk down — right down — inside Gordon's and in the corner I'll be nursing a schooner of port. I may ignore you. You'll notice from the customers' clothing (not mine, obviously) that it's just after the war. Take my hat and coat and step out again into the Thamesside smog.

Listen to the foghorns as you head east, listen to the seagulls and the squawk of urchins and the roars of coachmen. But keep your wits about you. Past Temple, cut up to Fleet Street and pop into the Cheshire Cheese. I'll buy you a wine. My companion won't speak to you. He'll give you a copy of the Times though. You'll notice it's the first-ever edition. Take it, read it, leave us.

Outside, jump on a 76. No sound. There will be no sound because it's 2044. Get off the bus in Dalston and walk down to the Vortex. I'll buy you a whisky there but you must promise not to talk. Reggie and Ronnie will both be there. They shouldn't be but I haven't been able to tell them.

And that's it. Simple. Good luck. You can find your own way back? If I were you, I'd ignore Google Maps. Much more fun my way. And — if you somehow make it back — I'll leave you alone forever. I promise. Forever.

We're taking a break from our themed stories for a couple of weeks. In the meantime, we're still after your general submissions, which you should send to fiction@londonist.com. Entries must be no more than 1,000 words, and must be set in London, or strongly inspired by the city. Full details here.