London Short Fiction: An Afternoon Some Time Ago

By Londonist Last edited 82 months ago
Londonist London Short Fiction: An Afternoon Some Time Ago 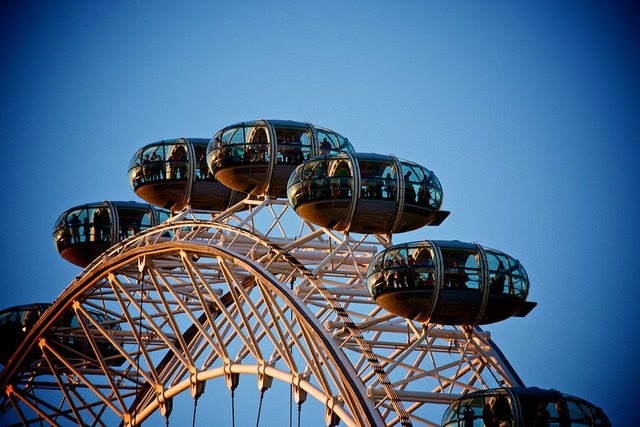 Continuing our series of short stories set in, or influenced by, London in the Summertime. This week, Nathan Good takes a nostalgic ride on the London Eye.

An Afternoon Some Time Ago

I shook her hand. I was happy to meet her.

The Southbank was bustling. Tidal waves of baked flesh swelled and broke against us. Nobody acknowledged that something monumental had just happened. People cheered and sang, but not for us.

She had red hair, which I thought was wrong. Kathy hadn’t dyed her hair until October. She had been Christmas shopping with her sister and they had bought a bottle of Burnt Vermillion on a whim. They almost destroyed my bathroom with that dye. But that was much later, so I averted my eyes for a moment and when I looked up again she was blonde. She wore a black headband with a ladybird brooch on one side. I told her that it was cute and she giggled.

The Memory Of Kathy no longer giggled like Kathy had giggled. It was something different. It was a muffled sort of noise, like listening to a conversation through a wall.

“Do you want to grab a drink?” I asked.
“Yeah, sure. I know a place,” she said with a wink. The perfect mix of cheek and sincerity. It was as sharp and subtle as it had been the very first time. It was enough to catch me off balance; to rock me back on my heels. I took her hand to steady myself and she led me through the crowd.

We sat on the grass bank opposite the London Eye and sipped cider from plastic cups. The Memory of Kathy talked about herself. She worked in HR, she was a fitness freak, she took photographs sometimes but blushed when I called her a photographer. As first conversations go, it was stilted. At least, I thought it was. It was harder to remember the details than it had once been. The cider, the sun, the band playing a Beatles song somewhere behind us — those things were clear, but the way the conversation flowed, how we moved from one topic to the next, it was disjointed, hard to piece together.

“Want to take me on the London Eye?” she asked, and that was wrong too. She would have asked more eloquently than that.
“Have you never been before?” I said, but before she could answer, she began to change.

The Memory of Kathy grew three years older. She looked very tired. She threw her hands down by her sides and locked them at the elbow. Her arms were pistons. Her face was bright red. “WHO IS SHE?” she shouted. “DO I KNOW HER? DO I?”

I dropped my gaze to the grass. Around us the Southbank disappeared behind the pastel walls of our Crouch Hill apartment. I stared at the wooden floor. How can I answer that question? How can I make her understand?

Somewhere a band that were not the Beatles were finishing up A Hard Day’s Night. The Memory Of Kathy took my arm as we boarded the capsule. She was blonde again, butterfly brooch in place. We had the pod to ourselves, and I knew that was impossible. I knew that on that first day we would have shared it with several strangers, but we paid them no attention. Kathy was the only person in the universe.

We ascended above the city leaning side by side against the glass. We mapped the streets with our pointed fingers and pooled our geography to join up the dots. About half way up The Memory Of Kathy said, “That is the most beautiful thing I’ve ever seen,” but she was joking. She was looking at her reflection and pretending to be vain. She stroked her cheeks and looked down her nose, pouting. More than the first meeting, more than the cider and the Beatles cover band, that is what I wanted to remember. That first hint of mischief.

At the top of the wheel someone pushed into my back. I turned to find a crowd of people jammed into the capsule behind me.

“Where did you all come from?” I said, but none of them answered. They were already talking. Each of them talking over each other, trying desperately to be heard. Some of them were wearing the headband, others were not. Some were in jeans, others in her favourite blue dress. One of them even wore a Halloween costume. That one, dressed as a zombie-cheerleader, was crying. I could not hear her over the confused chatter but I knew what she was saying. “I just want to go home. I didn’t want to come anyway. You knew that.”

As the capsule hit the apex of the climb, and began to take us back to earth, I made sense of The Memory Of Kathy. She was just Kathy again. With the ladybird brooch and the sweet smell of cider on her breath.

“It’s expensive,” she said “for a fairground ride.”
“Look Kathy, I have to tell you something. I’m really sorry. I didn’t mean for any of this to happen. I miss you.”

She couldn’t hear me. The Memory Of Kathy could only hear The Memory Of Me. He talked about how the view was worth it. He said it was nice to share a view like that. She rolled her eyes and gave a sarcastic “awwwww”. They took each others hands again as the capsule stopped and the door slid open. They walked back into the sun, and looked, momentarily, like the perfect couple.