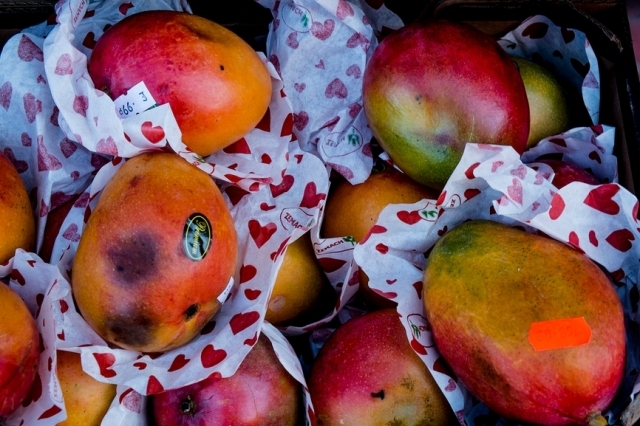 Continuing our series of short fiction set in, or influenced by London. This week’s story is by eight-year-old Lara Rizzolo Blackman.

In five a day London, we all know the drill for the juiciest vegetable competition. Every year someone wins, they get a prize bla bla bla. But the competition is Mango's favourite thing ever and even though he isn't a vegetable, all of the fruits are invited. Each day, Mango wakes up and crosses the day off his calendar, waiting for the 8th of July which is the big competition day.

Bright and early one healthy day, as always Mango goes to his calendar and realises that it is the 8th of July!!!!! He opens his wardrobe to get his smartest clothes and runs off to Hyde Park, but in his excitement, he forgot something — his breakfast. And to Mango, breakfast is the second most important thing after the once a year competition.

Don't tell Mango I told you, but he is rather plump. So it doesn't surprise anyone that Mango goes to that competition — because at the end you get free Shredded Wheats. After he's returned home for his first Shredded Wheat of the day, he runs off for the second time. When he got to Hyde Park he saw everyone with a glum face. Is it me running late he thought? Mango asked one of the members of the audience why is everyone so sad? They said it was because Celery was missing, so they could not do the competition. Then the announcer (Tomato) said can I have a plump fruit to come up to take over for Celery. Everyone pointed at Mango, so with a loud YAY he ran up onto stage and did his best muscle man pose.

Suddenly flying through the air came Pig from Meat village! He pushed Mango over just like he wanted to take over from Mango!! Then the rest of the meats turned up and joined Pig! It was obvious that they hated the food that they were being given in the countryside. But when Cow spat out a string of celery everyone saw that he had eaten Celery!

At that moment I came flying through the air. Everyone stopped and stared. There are no such things as humans in London, so the fruits and vegetables call us aliens. AAAAAAAAHHHHHH everyone shouted, ALIEN!! They all ran off, even the animals, and left me there. Luckily I managed to catch Mango and I began to eat him but he had loads of layers, like chocolate, caramel and marshmallow. EW! I hate sweets!!! I ran away shouting FAKE FIVE A DAY FAKE FIVE A DAY. So I left greedy Mango to eat himself.