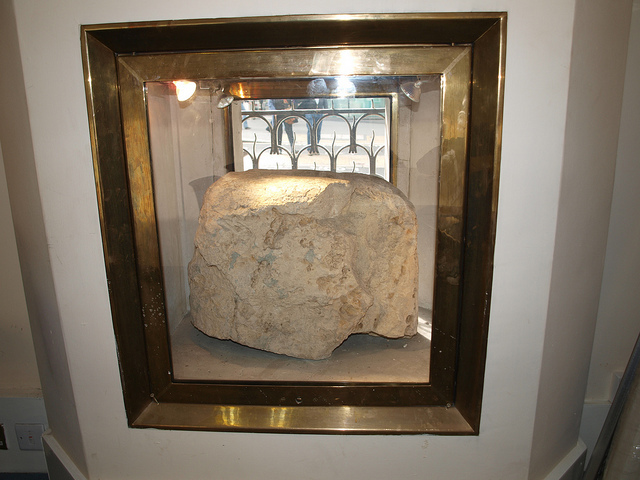 Our short fiction series continues. This current special theme is London Razed, visions of the city’s destruction in the past, present or future. This week, Rebecca Sams filches a legendary London object.

I am a conqueror, I am a king; I have stolen London Stone. I have it here in my mum’s shed in Hastings, hidden behind a rusty lawnmower and five bags of Quik Gro grass seed. I hear on the news that it’s raining in London. Raining and raining and raining.

‘Hurry the fuck up’, hissed Ian impatiently, hovering next to the National Lottery stand.

I was on my knees behind the magazine rack, the section offering titles on how to improve your CV, time management skills and interview performance. Nervous sweat had saturated my t-shirt and my latex-gloved hands shook a little as the last screw loosened.

I dropped the screwdriver, lifted the frame away from the wall and put it to one side. I reached in, carefully removed the Stone and passed it to Ian. He put it down and handed me the copy. It was good enough. It would be a while before anyone noticed. I replaced the frame and that was it. No pressure sensors, no alarms, no apocalypse.

Ian wrapped the original in bubblewrap and zipped it into my mum’s green leather suitcase. We tidied up and he let me out onto Salters Hall Court.

‘Right, I’d better go and turn the cameras back on,’ he said. ‘Give me a ring later.’

He adjusted the volume on his radio and straightened his tie. He looked tired.

I, on the other hand, felt energised; charged with adrenaline. I dragged the suitcase down onto Cannon Street and began searching for a taxi. I’d been back in that miserable shithole for long enough. It was 4am and it had started to rain.

Before long the Thames would rise up and spill out over the embankments, over the cobbles and cracked paving stones, over the parks and squares. The city would be abandoned and, in time, completely submerged. London would become a great lake; an underwater archaeological theme park.

Scuba divers would swim around the ruins, reading little plaques and pointing. Perhaps someone would plonk a giant dome over the whole thing, like a flagship branch of Center Parcs.

Ian believed that we’d sell the Stone quietly, to some shady foreign billionaire, and never have to work again. But he’s not exactly the sharpest sword in the armoury. What did he think we were going to do, put an ad on fucking Gumtree? At school, all he ever cared about was football, thieving his mum’s fags and trying to persuade Amber Nicholls to let him touch her up. He was lucky to get that security job after the police binned him off. In fact, at this particular point in time, he was a veritable fucking success story compared to me.

‘Go on, I’m worn out from Aqua Zumba. You can’t sit about moping all day.’

‘Oh Alex, you’ll find another job love. You could always ask at M&S in town. June’s son’s a manager there – I could have a word with her if you want?’

I ignored her but pushed myself up out of the floral armchair and stalked into the hallway where almost every inch of wall is covered in framed photos, mostly of my sister. I looked up at her in various states of accomplishment and tried not to feel bitter. I was 34 years old and a spectacular failure.

Above a picture of Sarah on a Shetland pony there’s a blown-up one of my dad and his fishing boat, taken a year or so before he drowned. He’s standing in front of it like he’s Captain fucking Cook. Whenever I look at it, I want to smash the frame, burn the photo and remove every other trace of him from the house.

I made mum a tea, kissed her on the cheek and told her I was going out.

On the bus into town I sat next to a stinking old man. The mixture of sweat, beer and general nautical foulness reminded me of dad and I held my breath.

I climbed Castle Hill Road and sat for a while on the grass between the castle ruins and the entrance to the caves. The bay was below me; the fishing fleet, the beach, the crazy golf and the trampolines. To the right, just out of sight, were the ruins of the pier. This was my kingdom now.

I pulled out my phone. It’d been on silent and I had three missed calls; two unknown and one from Anita. There was also a voicemail and a few emails. I listened to the voicemail first.

‘It’s me,’ came her familiar voice and my stomach lurched.

‘Look, I’ve been thinking and… well… I want to try and work this out. I mean, I love you and I know things have been difficult but we can get through it. If you still want to, that is… Look, I’ll try you again later, but just think about it, ok? Bye.’

After that, all I could see was her face; her beautiful green eyes, her soft, pale skin and her short, dark red hair.

When I eventually looked down to check the emails, I blinked a few times to make sure I wasn’t mistaken because there, sandwiched between an update from Londonist and the latest newsletter from London Historians, was an actual interview invitation. Not an interview with a recruiter but an actual fucking interview for an actual fucking project management job with an IT consultancy in Farringdon.

I sat there on the hill and began to feel ridiculous. Maybe London wasn’t so bad after all. Maybe everything really would be ok.

I stood up and called Ian.

‘Found someone to buy it?’ he asked.

Copyright, Rebecca Sams, 2014. Image of London Stone by Past London in the Londonist Flickr pool.