Continuing our series of short fiction set in, or influenced by London. This time, Lee Hamblin takes a sneaky taxi ride. 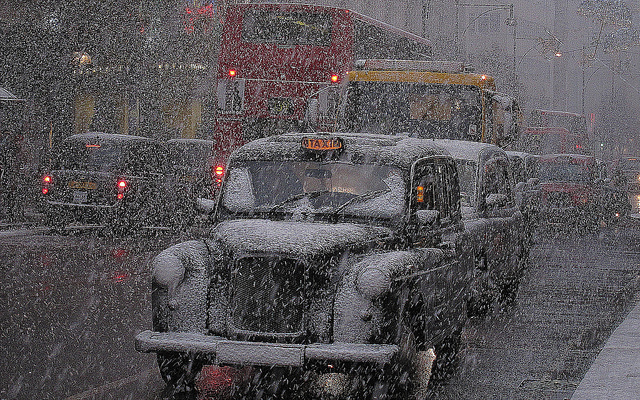 “Quick, under the blanket.”

He says it in a whisper, his lips hardly move, but even still, his voice carries an authority that makes me tighten just a little. As he pulls over to an abrupt stop, an irate driver gives a long blast on his horn. He ignores it like he doesn’t even hear it. The idling engine whirrs away beneath where I lie in stillness, keeping me super warm. I’m huddled in a space not meant for a boy of 10 (small though I am), but intended for suitcases and baggage, parcels and pushchairs. I hold the blanket tight, an inch above my head, and try not to breathe. Through the blanket I make out the dazzle of bright lights — street lights, shop lights, coloured lights of red, gold and green, set in the shapes of stars and Christmas trees and angels. The flashing lights make me think we’re in Oxford Street, or Regent Street, we could even be right outside Hamleys.

He reaches an arm over and slides the window down, an icy air grabs me and I think I’m going to sneeze. I don’t. I can’t.

“You can’t let them see you,” he’d said, “I’d lose my badge if they do.” I believed him. Of course I did. “If you’re a good boy we’ll split the tips, and maybe you’ll get that Chopper for Christmas.”

I was going to be a very good boy. A Raleigh Chopper. In bright red. From Hamleys. Yes please.

By now I knew London pretty well, not literally though, but from dad’s vast collection of spiral bound pads, brimful of handwritten routes, methodically documenting the directions needed to take us from point A to point B — from pick up to put down — from Trafalgar Square to St Paul’s Cathedral — from The Monument to Shepherds Bush Green — from Mile End Underground station to St Leonard’s church. I’d tested him for an hour most nights the past two years — even longer as his exam date drew near. My finger would glide beneath every word he’d written, making sure he repeated verbatim what was down on the page. I was to say nothing, simply to look up at him when he’d made a mistake, or missed a line out — bore left instead of right — missed a notable landmark — taken a wrong turn, that kind of thing. I had to wait if he needed thinking time, and only give him help when he said. Those were the rules.

His voice sounds funny. He doesn’t much sound like my dad when he speaks to strangers, it was his work voice I suppose, it changes all the time, depending on whether he was being deferential to a barrister, or begrudging to a barrow boy, or pally with a baker. But whatever the lady said was drowned out by the engine’s rattle and hum. I was just relieved she’d no big suitcase with her. Dad set the meter running and only once under way did I lower the blanket, just enough to see lights flashing by, the tops of old buildings, but no eye contact with dad — those were the rules. He’d sneak a little wink in when the coast was clear though; I think he liked playing the game as much as I did. After all, it was our little secret.

Nights out in dad’s taxi became regular, though only on a Friday or Saturday, never on a school night. He’d work days, because he had to, but he much preferred nights — more people, more money and less traffic, he would say. I couldn’t tell anybody of course, especially at school. He said that if a teacher found out he’d be in big trouble, and so would I. He never said exactly what trouble, but I had a pretty good idea.

Going out with dad sure beat having to stay over at Mrs Templeman’s — she was like one of those cat ladies, but with kids. Hers was the ‘after school’ house, where all the kids went until collected up by their parents. She was nice enough considering the chaos surrounding her. I went there a few times early on but hated it. For a start, the place always smelled of damp and sour milk and the stink used to seep into my clothes. All I wanted to do was sit and read a comic or something, but there was always someone in your face. When I told dad, he gave me my own house key that I wore on a piece of brown string around my neck, and he told me to say it was for emergencies only, but of course, between us, we knew different.

We seemed to be going round in a circle, and looking up I could just about make out Horatio Nelson, sat proud on top of his column and I wondered how they managed to get him all the way up there, and I tried to remember how he lost his eye, or if indeed he had lost an eye, or was that Wellington? But that was something I’d have to ask dad tomorrow. If I remembered.

The meter clicks away, ten pence at a time, click, click, click. Dad has the little dividing window behind him wide open but the lady isn’t saying much, maybe she’s not in the mood, maybe she too just likes to sit and read.

That’s my cue to sidle back underneath the blanket. Dad stops the meter.

I hear the lady slam the door. Dad leans over me and slides the window open. My heart starts pounding.

Did I hear correctly? I’m sure my heart skips a beat. I’m good at maths, and I know that £3.50 will go some way towards buying me that Chopper.

We’re still after your stories based on Christmas in London, which you should send to fiction@londonist.com. Entries must be no more than 1,000 words, and must be set in London, or strongly inspired by the city. Full details here.