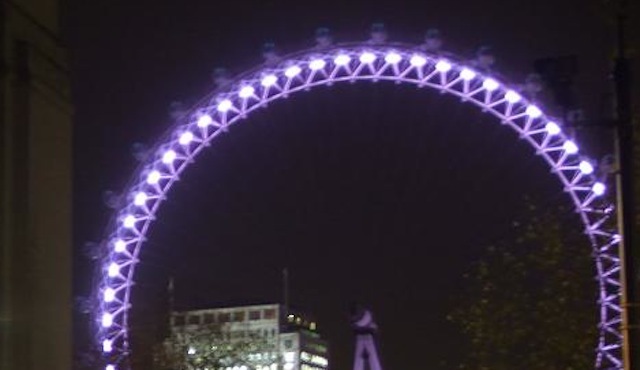 Continuing our series of short stories set in, or influenced by, London. This month’s theme is ‘sexy, sensual, saucy London‘, which concludes today with a brewing romance in a gay club.

Even though the place was crowded, my eyes locked onto his from across the room. Although they were far apart, I was captivated by the electric blue stare washing over me. My phone vibrated in my pocket. I swiped it to find the text that I was dreading. ‘Have fun with the guys tonight. K xx’. I felt the guilt wash over me. Suddenly my hunk wasn’t important anymore.

“Having fun?” boomed a voice in my ear. Matt slapped me hard on the should1er; his face was glowing with sweat - blood flushing his skin as his shaved head shone brightly. “See anyone you like?”

I gazed at the floor, blood flushing my face too.

“Lighten up darling, it’s a party! You’re here to have fun!”

“I’m just not really feeling in the mood”, I said. “Maybe I should head home…”

“Bitch, please! No one leaves a gay bar at ten o’clock!”

Every muscle in my body fought against his words. My upbringing on a farm had given me a buff physique, but my muscles were now trembling. I brushed my straggly locks from my eyes; my hips rocking to the beat were now frozen.

“Come and have a dance!” he said, gleefully. Before I had chance to protest, Matt was thrusting me onto the dance floor. I was soon surrounded by young twenty-somethings, jumping around me. An Asian man with a hooked nose ran his eyes across my body and winked. My stomach felt sick and I leaned my body away from his. I turned to seek help from Matt, but his attention was lost on the man he was next to - something told me he needed a reason to be in the centre.

It all became too much for me. I grabbed my coat and headed for the door. Once outside, a muscular bouncer stepped back in front of the door - sealing me away from sin. I felt the icy chill of November, and gazed up into the starless sky.

“Excuse me”, whispered a smooth voice in my ear, “but aren’t you cold?”.

I turned around to see him again, catching his hypnotic gaze. I wanted to say something, but my mouth had forgotten how to speak. Everything about this man was perfect; from the small patch of grey on his temples, to his rippling biceps under a tight black shirt, to his washboard stomach. Suddenly I didn’t feel cold.

“Oh everything’s fine”, I replied, as my eyes looked over his shoulder. “I just came out for a bit of, uh, fresh air. It’s really packed in there.”

“Yeah it can get pretty crowded in there, your first time?”

“Ummm”, I mumbled as the blood rushed, “this is actually my first time coming to a club like this.”

The air hung with silence for what seemed like forever.

“Listen, why don’t we go for a walk? It’s a beautiful night.” He slid his hand in mine. It nestled comfortably.

“Sure”, I said cracking a smile “I would love to.”

We walked along the edge of the Thames under a new moon. I told him everything, and I mean everything. I thought he would be judgmental, but instead he told me how he hid in the closet for seven years, moving to London so he could be alone in a crowd. We walked for what seemed like hours until we came to a standstill underneath the metallic giant – the London Eye. It was odd to see the crowded Southbank so hushed. I imagined the whole city belonged to us.

“How did you manage to…you know…tell the world who you really are?”, I asked.

We came to a standstill, my feet felt frozen in ice.

“I mean…I don’t think the world has to know my sexuality. Straight people don’t go around telling everyone who they like, why do I have to? I only want the person to whom I’m really attracted to know…”

He had moved in closer. The dangling carriages overhead bathed our bodies in a navy spotlight. I realized how warm and tender his breath was on my skin. His beard was inches away from my flesh, which was now quivering with excitement. A bulge had erupted in my jeans; it found another bulge pressing against it. As he drew his lips to mine he whispered, “I’m gay, James”.

As we kissed, he reached and tugged at my hair, pulling me into him. I moved my lips down, kissing and nibbling the base of his neck. He groaned and sighed. For the first time in my life, everything felt as it should be.

“Wait” he whispered. “I want to do this right. Give me your phone.”

I handed it to him as entered his number, and then passed it back. He had saved the name under “Alex” - a genderless name that wouldn’t be detected.

“I’d love to have you hard right now…but I’m tired of hiding. I want the man I’m with to not be hiding either.” He kissed me on the forehead, shivered, and headed back towards the bar…

Approaching my house in Wimbledon, I slid the key into the lock and crept, so as to not wake the children. I opened the bedroom door to find Katie sprawled across the bed as the sun started to rise behind her. I kissed her on the forehead, although my lips had not wanted to. She stirred.

“Good morning baby” she said, as she rubbed her eyes. “Did you have fun last night?”

“Yeah,” I said, as my voice cracked. “Listen, why don’t I take you out for dinner today? There’s something I need to talk to you about…”

Copyright, C Evans and Lance Middleton, 2014. @LanceMStories and #LanceMiddletonWriting. Image by  in the Londonist Flickr pool.

Although the 'sexy, sensual' theme is now over, we're still looking for general London fiction stories. Please continue to send submissions to fiction@londonist.com. Entries must be no more than 1,000 words, and must be set in London, or strongly inspired by the city. Full details here.