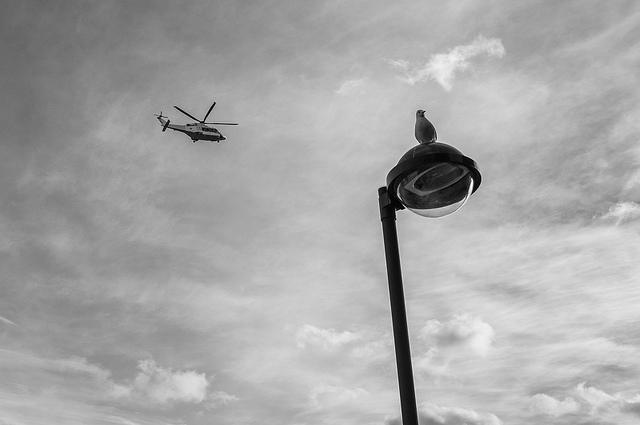 Continuing our series of short fiction set in, or influenced by London. This time, Emily Williams recounts a ghostly police chase.

Sirens Of The Tideway

Through the chopper's window PC Dave Witham watched the headlights of the A321 pulse along the northern bank of the Thames.

They whirred over the South Bank and past the luminous clock face of the London Eye. As they gained altitude, the threads of streets tangled into a ragged lacework, stretching out to the horizon where the lights bled into the night sky. The view from the window was pretty, but full of illusions. Dave looked at the same view on the thermal imager, in all its monochrome reliability.

The postcodes and boroughs rolled out beneath them. Away from the centre, parks and reservoirs rent holes in the taut lattice of roads.

They circled the building site. The thermal imager showed nothing except a few scurrying rats. Dave turned on the searchlight. It was impossible to tell whether the site was half way through construction or demolition. Cement flesh clung to multiple ironwork skeletons. Dave saw something move on the tallest one.

"There! There! Two females."

Dave radioed his observations to the ground units and watched as the two figures climbed the structure. As an escape strategy, it was doomed to fail, but he admired their spirit. They didn't react to the chopper overhead. Dave angled the searchlight into one of the women's faces. She looked up without flinching, her features blasted by the 13 million candlelight beam. The corners of her mouth twitched into a smile.

He watched the officers on the ground circling the base of the building. The women reached the top and straddled the ring beam, 15 storeys up. After 10 minutes the ground units concluded that there was nothing there except some loose tarps.

Dave guided the searchlight back onto the top of the building. They were gone. He turned to Mark.

"You saw them though?"

"Nah, but then I was on the controls."

They flew over the site again, flooding each of the unbuilt towers with light. They did not find anyone. Nothing had been taken, but the security guard was certain he had seen two intruders climb the half finished tower. Dave switched on the thermal imager to check it was still functional. Around the site the streets were animated with the glow of moving vehicles and the occasional pedestrian. On the site there was nothing but the dull grey of empty buildings.

"Funny one, that. They didn't try to hide — it was like they wanted me to follow them."

Mark was silent and rubbed one of the monitors on the dashboard with his cuff.

More calls followed: to Haringey to track a suspected burglar who had already been apprehended by the time they arrived; the usual rave in Hackney, crowds of revellers on the roof of an old warehouse who greeted the chopper as though it had come from another planet. Their presence did little to calm the situation.

Flying south to a fire in Battersea, they passed the power station whose brickwork face held court over its surroundings. The fire was in an office by the river. Flames balled out and sent dense black clouds of smoke into the sky.

They followed a moped which had been seen shortly before the blaze and was heading south on the A23, through Brixton and along Tooting Bec Common.

"They're dumping it." Dave watched two figures running onto the Common. His stomach dropped as he recognised the two women from earlier: two flecks of white running towards the railway line.

He turned the search light onto the tracks which glimmered under the beam. The women approached the railway. As they stepped onto the tracks, they were illuminated by two headlights heading south which almost matched the searchlight for brightness.

The ground units found nothing in the woods to the East of the Lido, or on the train tracks themselves. The driver did not report seeing anyone near the tracks and was certain he had not collided with any pedestrians.

"You saw them?" Dave asked as they flew away from the abandoned search. The instant coffee he had drunk before the shift echoed in his mouth.

"Yeah." Mark looked straight ahead. "Yeah, I did."

It was 4.03 am, an hour before the end of the shift, when they were called to the Isle of Dogs. It was late. They had 30, maybe 45 minutes flying time left in the tanks.

In contrast to the solid warehouses and dock buildings, the Thames was unruly, writhing and giggling under the lights of the chopper as they touched the water.

"There's something on the river." Mark said.

Dave rubbed his eyes and passed his palm over his nose and mouth. His face was greasy and rubbery. He looked down at the river and blinked. A small, apparently unpowered raft was floating down the river.

As it came directly underneath, Dave could just make out its two passengers. He grasped at his seat belt, seeking reassurance. His hand felt alien to him.

"Mark, it's them. The women from before."

The radio buzzed. Dave clicked it off without looking away from the tiny craft.

He turned off the searchlight and the GPS. The raft was still visible in the moonlight, the women's white tops billowing like flags.

The city froze behind them. The only sound was the whirr of the blades which kept the two men afloat down the Thames, through Kent and past Canvey Island. The chopper carried on behind the raft as it picked up speed into the Channel.

As the helicopter's engine finally cut out and it tumbled into the sea, four eyes watched as it was swallowed by the water and sunk, soundlessly.