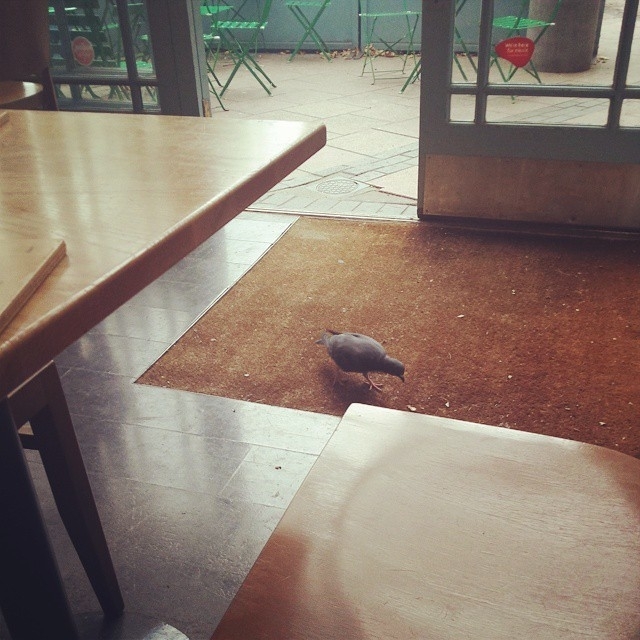 Continuing our series of short fiction set in, or influenced by London. This week a south London cafe gets an unwelcome visitor.

One Sunday we ventured out to fill up our reusable bottle with red wine from a shop on the high street. We enjoy visiting this shop because it has two wiry old grey dogs with arthritis who sit on large oriental cushions. They always look forlorn as their owners pour wine into our bottle from the silver tap on the barrel. We knew they wouldn't be there this time though because we saw them playing, or rather limping about, in the park with the lady who often pours our wine. So instead we went to a little cafe at the edge of the park, one we hadn't visited all summer. It's right outside our gym so we usually call in for eggs and bacon or at least a cucumber and ginger juice most weekends; however, this particular gym has poor air conditioning and so we avoid it in the summer and return only when the weather has cooled.

So we hadn't been to this cafe for a while and they looked happy to see us again. We started visiting the cafe when it first opened and it needed our custom. We always tipped well because we liked them; the service was good and you could tell they were a small family operation. However soon word spread that their coffee was decent — by London standards. It was only alright by Australian standards. The food was fresh and seasonal and people in gentrified south London value these two things highly and so it became busy quickly. Suddenly there were buggies and children everywhere and we could no longer just walk in and get a table. The only positive aspect to this influx of children was that they all ate off-menu sausage sandwiches and we didn't know it was possible to order sausage sandwiches before.

This time it was around four in the afternoon though and so we were able to walk straight in. We ordered our coffees and sat at the table by the door so we could still breathe in the crisp autumn air. I was busy telling my partner that the cappuccino was good, the milk was properly hot for once, and I liked the large handles on the coffee cups. They weren’t large handles really, just a normal width in which to slip a thumb and pointer finger; however, so many other cafes use cups with tiny handles — ones that can’t even accommodate a pinkie — that a normal sized handle has become a delight. Partway through my rant about these tiny-handled cups, a pigeon came into the cafe and started pecking at the mat just inside the door, picking up little crumbs. Soon it moved away from the mat to the front corner of the cafe where a young lad in his twenties was reading a book and nursing a hot chocolate. I said the pigeon would be alright as long as it didn't get frightened and fly up into the ceiling. It is very stressful watching a bird flying around the corners of a ceiling trying to escape out into the open. I don't like the physicality of birds personally, the flapping wings and the bony little claws, I prefer them to just stay at ground level and walk around.

Thankfully this bird wasn’t easily frightened. When the waitress came and shooed it away with a swoop of her arms it ran outside like a scolded pet. However in the time it took for her to walk behind the counter the bird was back inside again, poking around near our feet. This time my partner kicked the air and clapped his hands and it went out again. It came back, of course, and the waitress then tried to sweep it out with a broom. We were laughing now; we'd had a nice day and the theatrics were entertaining, though the chef, who I believe also owned the cafe, was starting to get stroppy with the bird. The young lad with the hot chocolate went to use the toilets at the back of the cafe and when he came back the bird was on his seat. At this point the chef swept the hat from his head, came out from behind the counter and chased the bird right out into the street. When he came back in he put his hand up to the sky and announced: "I'm a vegan, but for this bird, I'll make an exception."

We’re taking a break from our themed stories for a couple of weeks. In the meantime, we’re still after your general submissions, which you should send to fiction@londonist.com. Entries must be no more than 1,000 words, and must be set in London, or strongly inspired by the city. Full details here.