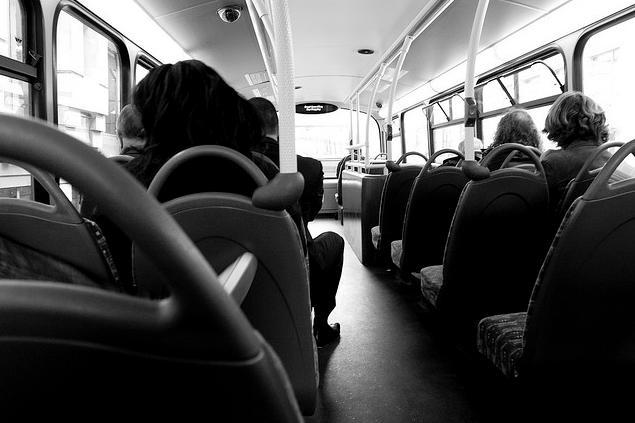 Continuing our series of short fiction set in, or influenced by London. This week, Anthea Morrison records a chance encounter.

The Sender Of Second Chances

Chock-a-block all the way down on the bus today so I’m upstairs. Sun’s hot through the glass but best not take my coat off, I’ll be getting ripe underneath it and there’s stains on my dress won’t sponge off with cold water. Place I’m staying in now, you have to be up with the larks and up for a fight if you want hot water, and I’m past that now.

Not much happening on the street down there — folk scurrying about with their heads down mostly. Think who they might see if they’d only look up now and then — neighbour, friend, old lover. Or a stranger with silver buttons on his coat, and a smile like summer. Saw him pluck up the courage — come to the sea with me, he said, train to Margate; go on, you only live once.

You get the teenagers upstairs, flicking their hair, putting on a show, no idea the thousand different ways their lives might turn out. Downstairs the mums battle their prams and kids, promising the moon to keep the peace. Missed that boat years ago, but I keep a picture in my head of what could have been; a boy I like to think, with that same sunny smile. Daft, I know.

Bus swings into a stop at Kennington Park, usual clatter of branches from the chestnut tree against the windows. Young woman comes upstairs — something promising about this one, not plugged into her phone like most. She has a proper look at people, gives me a smile instead of a wide berth and sits down in front of me. Her eyes are grey and ever so clear, like the rock pool where we sat down at Margate, dipping our feet while we told each other everything we were, all that we wanted to be. The rock was warm and smooth under my feet when we kissed.

We lurch away up Kennington Road. Driver yesterday kept sending the tots flying into everyone’s legs — miracle how some of them pass their test — I shot my arm out to catch one, human instinct, but the mum grabbed him off me quick as a stick, eyes wide.

I don’t blame her. The years haven’t been kind and nor has some of the company I’ve kept, grog included. Thirty years and more since I sent him away, after the sand had gone cold under our feet and everyone else was going home. Make a mistake big as that, you stop trusting  yourself to make decisions, just let life carry you.

Going round the corner at Lambeth, the woman in front has to grab the pole to stop herself being hurled off her seat by Stirling Moss down there. Her hair’s dead straight, the colour of conkers, something like mine when I was a girl.

Waterloo Bridge, and we’re almost full. Last one to come up is a tall fella with a full beard, trimmed neat like his Brylcreemed hair. A stillness about him, something solid. He has a look down the bus and starts to turn back when he spots the last two empty seats, next to me or next to her — well, no prizes.

Got a good feeling about these two. They clock each other just a bit longer than they need to as he sits down. His eyes are set deep and his smile is slow, trace of an old sorrow in it, maybe. I feel the spark, probably before they do. She runs her hand down the side of her neck, smoothing her hair, and he straightens his shirt collar, first one side then the other. I whip out my notepad and scribble, pencil shooting off the page as Stirling throws the bus round the corner at the Aldwych. They turn towards each other again, not quite in time, and I can’t see from behind whether they’ve caught eyes, but I’ve been doing this for so long I pick up the smallest signs, and I see them lean a hair’s breadth closer.

The woman turns her face like she’s looking out the window, dabs something on her lips from a silver tube in her pocket, faces forward again with a little shake of that lovely hair. Go on, say something one of you, God love us! But when the brakes get slammed on at Holborn Tube, he gets up slowly, flashing her a smile with a pound of regret in it before he disappears down the stairs. She half rises, hitching her bag strap over her shoulder, but no. She sinks down and sighs, twisting her hair round the fingers of her right hand. No point telling her what I think, she’d smile politely and pull a book out of her bag.

Hundreds of missed chances like this every day, but I can’t be everywhere at once. Sometimes people take the plunge afterwards and send a message into one of the free papers that get left all over the seats: 'To the girl on the District line with the blonde hair and the black coat' — well that narrows it down — 'I can't stop thinking about you, please get in touch.' That’s why I carry a notepad, so I can get all the details, so there can be no doubt.

Her coat's the same colour as his all those years ago, silver buttons on the shoulders catching the moonlight after I sent him away down Margate seafront, slowly shaking his head. I thought there’d be others could make me feel the same. Didn't know I'd fallen in love.

I know the PO Box number by heart. I write out the rest of the message: 'To the woman on the No.59 to King's Cross, Tuesday 1st October — chestnut hair, grey eyes, olive coat, amber earrings, and the man who sat next to her over Waterloo Bridge — red and black checked shirt, brown leather satchel, beard — I saw you both wondering What If? Here is your second chance.'