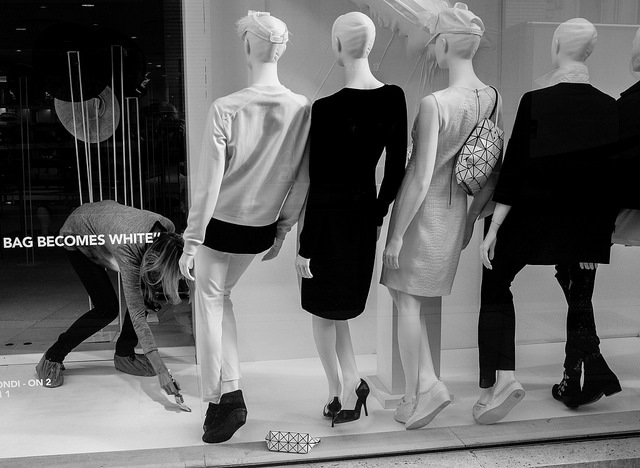 Continuing our series of short stories set in, or influenced by, London. This week, Tom Mitchell offers another extract from the diary of a washed-up actor, who you may remember from an earlier story. In fact, this is the third Kay Richardson installment, which follows on from this one.

It was a piece of piss to get to the IPMA. It was on the Mall, down from Buckingham Palace (where the Queen lives). I ignored the fact that IPMA stood for Institute of Post-Modern Arts and entered through its tiny, post-modern door, located in the corner of a sublime Georgian palace (it wasn’t really a palace, but it was bigger than a house and the architecture was fairly impressive, all white stone detail and lions and windows, etc.).

Its interior looked much like a cinema foyer. There were even posters for films and neon signs for Screen One and Screen Two. I approached a large chap who sat behind a glass desk. He wore small glasses and appeared bemused. I asked where the bar might be. He pointed down a corridor, previously obscured by a subtle shading of light.

‘Are you a member?’ he said, always words to strike fear into the brain.

‘No,’ I admitted and was forced to fist over THREE pounds.

I ‘swore down’ that the bar had better be good, but he was already re-lost in the glow of his iMac. No doubt fiddling with his ‘social media’.

The passage to bar was MASSIVELY disturbing. Let me describe what I saw to my right, as I walked towards tables full of beards drinking beer in le bar:

Reader, it sickened me.

If only I hadn’t… the cruellest phrase in the English language: ‘if only’.

Two rooms, I passed. Along with tiny doors, both broke the wall with long rectangular windows that were free of glass.

The first room, although surreal, wasn’t sickening. There was a massive shoe rack that covered one entire wall (20 foot by 10). It was full of a variety of shoes (in colour AND style). There were a few benches scattered across room. People (punters, I suspect) were trying on shoes. There was a sign on the east wall: ‘Walk a Mile in My Shoes’.

Fair enough, I thought. I could see some figurative sense to this.

The neighbouring room stood in blue gloom, but there was enough light present to distinguish the two central figures. They were a couple of shop mannequins, sans clothing. One masculine model (brown wig) stood central. The other (blonde wig, appearing a woman) was bent over in front of the first. Its hips moved forward and backward in a slow approximation of ‘twerking’. Behind them stood a wooden mock-up of the front of an over-sized blank-screened TV, symbolising something.

Reader, I was outraged. I didn’t visit bars to view obscene mannequins, however interesting and po-mo they might be. Angry feet (in expensive trainers) sped me to Nick, who was waiting in the bar and acting as if my tardiness were the problem.

‘I just saw a mannequin twerk,’ I stormed.

‘Did you see the walls? There was filth with David Cameron’s face on it.’

I bought Nick a spritzer and charmed the bubbles out of her until she stopped moaning about time. The IPMA’s bar only sold beer from the bottle and all the bottles were imported from New York, so I drank them. Nick said that the porn/mannequins/shoes I saw were part of a competition for New New British Artists.

‘It’s a noteworthy contest,’ she said.

Drinking ensued as I pumped Nick full of questions about Lamda and acting, though I recall none of her bastard answers. Memory of the conversation becomes murky after the seventh bottle of IPA. I remember asking if she had a boyfriend. Her ‘No’ was delivered in an inappropriately aggressive manner. Yet I had only been guilty of making conversation. Is that such a crime?

As I later told the police, it was the alcohol’s fault that I mounted the mannequins (or ‘art installation’ as they insisted upon calling them) and aped a sex act. I also made ‘loud howling noises’, I am told. Reader, it was the drink that saw my poor body lose balance and stagger into the model TV screen. It was not, however, the fault of alcohol (nor me) that the faux TV wasn’t securely screwed to the ceiling. Shoddy workmanship.

My last recollection of the night was the man-sized wooden television falling towards my face.

The following morning, I was interviewed by the police in Guy’s and St Thomas’ Hospital, sporting a cream bandage over my right eye, a pirate dandy. I was told that I had scratched a cornea. The entire right side of my body was purple-bruised. Such pain was accompanied by a heinous hangover of head, for shame!

The young, idiotically moustached police constable informed me that the IPMA wouldn’t press charges (criminal damage) if I didn’t sue for personal injury. This seemed like a fair pay-off and I agreed, even going as far as autographing forms with my genuine name.

The PC handed me a note before he left. It was from Nick and it said:

I won’t ever see you again — thrilling knowledge.

Advice — Get a job in Burger King and quit drinking.

Discharged from hospital and safely secured at home, I cancelled my direct debit and, in doing so, considered myself the victor after all.