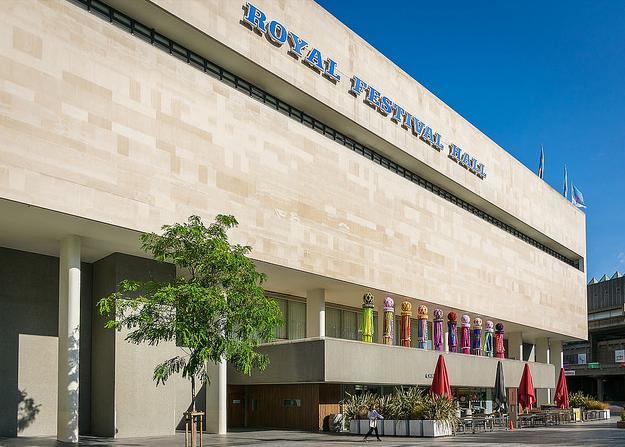 Continuing our series of short fiction set in, or influenced by London. This week’s story is by Francesca Baker.

"But I don’t want it." Joe crossed his eyes, folded his arms, pouted his lips and slammed himself back in his chair. Quick as nightfall in winter Charlotte shot out her arm to stop the teetering chair crashing down onto the tiles of the Royal Festival Hall.

She put her hand up to her straw-like hair, and tried not to look around.

"That is what is for lunch," she said firmly.

"Please Joe." Her voice was soft and plaintive, but her teeth gritted and chin out in anger.

Sarah, who until now had been engrossed in her food and was a good few bites through her sandwich became aware of her younger brother’s protestations and decided to follow suit. She squished the soft bread between her fingers and threw it on the table.

Charlotte looked at the substandard picnic laid out on the melamine table that rocked slightly every time someone leant on it. Soggy white bread filled with cheap butter and cheese slices, congealed layers each a slightly different shade of beige. Weak orange squash, of the type they served in nursing homes. A family bag of Tesco value crisps, decanted out into smaller sandwich bags, so ashamed was she of their branding.

He had a point.

"I want one of those," said Joe, pointing at the train shaped cardboard lunchbox a smartly dressed boy with soft brown curls was emptying on the table next to him. He was beaming an almost beatific smile, whilst his mother gazed at him with glowing eyes and luminous skin. Charlotte wished she could give it to him. Roasted coffee flooded her nostrils. A sweet scent of fresh baked cakes teased her and her children. A hum of happy chatter bubbled around them all, and a kaleidoscopic whirl of weekend activity vibrantly danced. Mothers in designer trousers were pushing expensive pushchairs and their children like catalogue cut outs followed suit, families apparently living the lives of glossy magazines.

Yes, she wanted that too. She wanted the life. She wanted a — she glanced up at the blackboard above the counter to see what she wanted — a prosciutto and mozzarella sandwich on fresh baked rye, not these clammy plastic cheese morsels. Her heart felt heavy. She wanted to give them a day out. In the city. Like real families. Show them the sights, the red glare of the buses and the bright lights of the streets. As a treat they had sat on the top deck of the bus. She had even cut the sandwiches into triangles.

She was fed up with this. She wanted to threaten to take them home, but she didn’t want to go home. The block of flats had seemed particularly grey this morning. Elephantine concrete slabs merging into the gloomy sky studded with black clouds. A wind had been blowing, whipping up crisp packets and chip wrappers all dancing in a frenzy, a blur of brown and green and vinegar-sodden white. Smoggy fuzz seemed to hover around it and ashen faced children mingled in the corridors with weathered adults.

Her legs were sore from climbing the flights of stairs up to their 15th floor flat. The teenagers who hung out had left it out of order again. Everyone knew it was them because the idiots had sprayed their names on the doors. She hoped her Joe and Sarah would never become like that. Idiots or louts. Yesterday she wanted to yank them by their hoods and yell and cry at them. Carrying Joe on one hip and carrier bags laden with economy brand food in her other hand, she could feel the plastic straining in her hands, little white stretch marks hinting at the disaster to come. Twisting the handles around her fingers was OK for a bit, but come the seventh floor one broke, and the shopping crashed to the floor. She’d rescued the apples as they rolled across the floor (Charlotte made sure they had fruit every day, she was a good mum like that), but the eggs. Gone. That was £2 she would never see again.

It had never been easy, but leaving Paul just made it impossible. There were days she regretted the decision, her decision to take her children and run. They didn’t know about the drugs and the violence, but they did know about warm rooms and nice food and good presents. They were happy then. Deep down she knew she did the right thing. But sometimes, when daily life ground at her, she was unsure. Everyone said she was brave. To take such a risk. Put her kids first. Although firmly placing one foot in front of the other, she seemed to be shifting and teetering on a shaky surface.

She smiled at her children, trying to jolly them into enjoying the meal, but tears were forming in the corner of her green eyes. Frustration and sadness collided within her, her hunger mixing with the knotty sensation of anxiety that sometimes lodged itself in her stomach.

She reached across the table with hands worn and etched to rub Joe’s hair. He scowled and pulled himself away.

She wondered if she could try harder. She could feel the last £1.53 to her name digging through the worn denim of her jeans into the flesh of her bottom. Looking again, she realised that it was not even enough for a can of coke for them all to share. She was exhausted.

They should never have come. Come to see this reminder of what she and her family were not and never could be. Staring out of the window she watched the rain fall, prisms of London lights forming in its droplets. The city could be magical. If you could afford it.