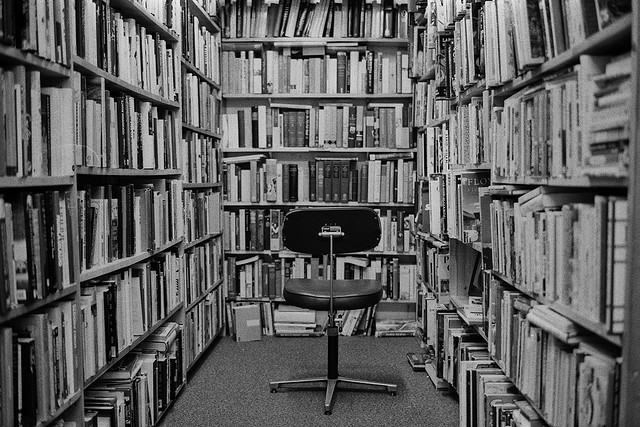 Continuing our series of short fiction set in, or influenced by London. This time, a celebrated novelist finds inspiration in Shoreditch Library.

Since storming home as the bookies’ favourite and eventual winner of this year’s Booker Prize, I have been inundated with requests to share my sources of inspiration. My interrogators — among them fans, journalists and old friends who really should know better — tend to adopt an irritating tentativeness of tone, having heard, I suppose, that successful authors will mythologise the writing process. I find this assumption deeply offensive. Does the public consider its writers to be mere publicity stuntmen? Do we appear riddled with insecurities so grave we must spin obfuscating yarns to prevent others from aping our genius (of course, I use “genius” here in the colloquial sense)?

I am grateful to Londonist for allowing me to address the question publicly and with candour: my inspiration comes almost exclusively from the penny-pinched near-hush of London’s public libraries. Such as the man in Battersea Library who landed at a computer terminal wearing an original World War One gas mask, and proceeded to inform his neighbour that chemical weapons terrorists had tracked him down through Yahoo Mail; he became the central character of my fourth novel, Outbreak. I also recall a Giles Coren lookalike, curled up with a five-pack of Morrisons jam doughnuts on a crumbed sofa in Archway. Since the nearest Morrisons to that library is not within eye-shot, and “Giles” happened to be wearing a pair of mustard-coloured hiking boots, it seemed inevitable that I should produce a short story in the style of Patrick Leigh Fermor. Before I move on to discuss specifically my recent prize-winner, I should mention the commotion caused by the lady with ratty hair who smuggled two pigeons into Westminster Reference under her grey parka. She is the muse behind my fledgling attempts at poetry.

But every artist is plagued by dry patches occasionally — an unhappy mental psoriasis, where the brain scales over and the world seems dead and ugly, each speck of humanity that crawls upon its surface a troublesome flake waiting to be sloughed off. It was in this crusty frame of mind that I sat down in Shoreditch Library to begin the novel that would make me rich.

Disobedient words — they would not come! My block persisted for three and a half testing weeks. Good friends advised a change of scenery, but I could not bear to give up on N1, that notoriously vibrant postcode. Happily I can report that my patience was rewarded in the most unexpected fashion — and I suppose that is the moral of this tale: patience is a virtue, or expect the unexpected. But now I am lecturing when I intended only to record the following event. May the reader decide what lessons are to be drawn from it.

Imagine me, if you will, sitting with my back to the double glass doors. My hand was crabbed around my pen, my back hunched in despondency rather than absorption. Suddenly a blast of late summer air hit the back of my neck; I was distracted by the erratic footfall of children and the rustling of book bags.

“You have 10 minutes,” a woman shouted. Her voice was stern but rich, like good coffee. I craned my neck for a peek. She was dressed entirely in black: a stretchy, low-cut vest and faded jeans with a slouchy cardigan on top. Black boots, in need of reheeling. Her face was short on patience. I counted five boys, each no higher than her bust, and I thought they could not possibly all be hers. Presumably one was her son and the rest were his friends, or else the children of her friends or neighbours. She placed her hands on her hips. “Ten minutes to choose one book. You hear me?” I think the accent was Caribbean, but I am terrible with accents despite being well-travelled.

“Yeahhhh!” the boys chorused, conventionally adorable in their school uniforms. They swarmed around me to the shelf opposite my seat. As they passed, I counted five heads. The shelf was labelled: GRAPHIC NOVELS. I propped my chin on my fist and watched with what I hoped was a fond smile.

Initially the boys seemed bamboozled; so many spindly spines! After frowning at the densely packed shelves for a few seconds, they began pulling books at random, flipping them open, making juvenile sounds such as “worrrr!” and flashing pages at one another. Eventually every boy hugged a book to his chest.

They returned to the woman and jumped around to win back her attention from the new release DVDs. Imperiously she opened a hand, and the boldest boy gave up his book. She fanned the pages with the ball of her thumb, making a zipping noise. I realised that I was holding my breath.

“Ohhhhh!” the boys wailed. “But ohhhhh! But whyyyy?”

“This one does,” said another boy, timidly pointing out a speech bubble.

The lady made a fly-swatting gesture. His face crumpled.

Now I have never been a visual learner, let alone a visual thinker. So imagine my surprise when I tore my eyes from this frankly charming scene to find my crabbed hand scratching across the page like billy-oh, not taking observational notes or styling lines of prose, but actually drawing. Deciphering my own swirls and angles was, I should imagine, an experience not unlike dreaming in a foreign language that one miraculously understands. This strange and nebulous artwork contained within it the entire plot of my prize-winning novel.

The novel then required an incubation period of 14 months. Once I started to write, I completed the whole thing in just eight weeks, almost entirely without sleep.

We’re also now looking for short stories both for and by children.