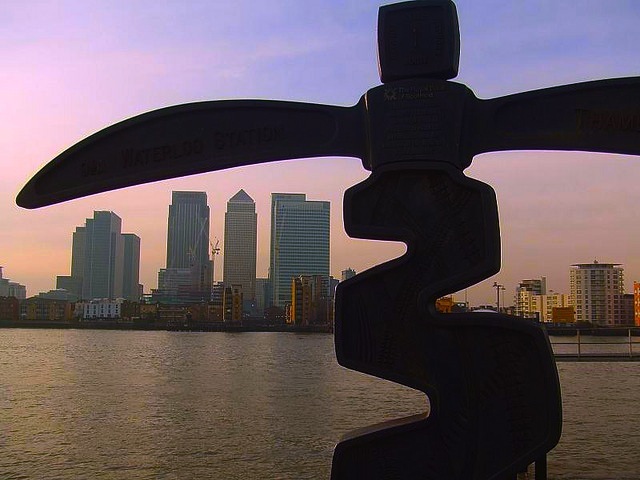 Continuing our series of short stories set in, or influenced by, London. Today, Madelaine Hills contemplates macabre goings-on in docklands.

The evening, for once, was warm and balmy. Sarah had gone out to her balcony to sit and sip at a post-dinner coffee. It wasn’t quite dark yet but the street lighting had already been switched on and there were lights dotted here and there from the flats surrounding the small rectangular dock on which she lived. In the distance, the light show provided by Canary Wharf was in full swing.

It started as a low sort of moaning sound; strong, yet not too intrusive. Odd, she thought, the place was usually so quiet, yet the noise was uncomfortably persistent. After five minutes or so, it changed to a sort of pleading scream, “No, no, not that please…”. Sarah picked up on just those few words. It was the voice of a young woman, she was sure of it.

The sound became repetitive and persistent. Soon the screams were pervading the air. She could see that other people were stepping out on to their balconies. After a short while they all began to shout to one another. “Call the police, has anyone called the police?” “He’s in there hitting her with a belt, I saw him.” Something horrible was happening, and now they were all sure of it.

Fear gripped Sarah’s heart. Would the police arrive soon enough to save the poor girl, she wondered. They did arrive, eventually, and were soon running up to the door of the flat, although things suddenly quietened down. She never found out how it had ended. It was a domestic incident and she didn’t even know if the man was obliged to allow entry to the police.

A few weeks later Sarah was once again sitting on her tiny balcony, this time with a cup of breakfast coffee. The morning light was shimmering over the water in the dock and the day was heating up nicely. With her cup clasped between her two hands she gazed out towards the gleaming, prosperous towers of Canary Wharf and the river, which lay like a shining loop of pale blue metallic ribbon in front of her. Then, hearing something of a commotion, she looked down towards the almost black waters of the dock.

There, in the water beneath her, was a small rubber dinghy marked ‘police’. A team of divers were probing the dirty, oily, murky depths – two by two. She watched the scene transfixed. Some while later it became obvious that the small boat was changing its position by degrees, and that the divers were intent on covering every inch of the area. Such an exploration would take a long time.

She blinked in the sunlight, then saw a pair of divers surface with what looked like a dark plastic sack, heavy and cumbersome. With some considerable difficulty, they hauled it up into the boat. Sarah turned away and moved back inside her flat. She couldn’t spend the whole day standing and staring. There were things to be getting on with. “Still, it’s odd,” she muttered to herself, mentally blocking out the grimmer possibilities. “Are they looking for buried treasure?”

The following morning was perfect in every way. As she idly made her coffee she heard once again the ‘ron ron ron’ of the outboard motor. Stepping out she let out a gasp. They were there again only this time they were grappling with a much larger load, so large that the divers had to guide it to the side of the dock where the sack was hauled from the water by two burly men with grappling hooks. Parked a little further along the dock was an ambulance. She frowned, felt a little queasy, then once more moved away.

Once inside, she looked directly out to the horizon and noticed the tiny planes lifting their noses up and out of City Airport, rising rapidly into the atmosphere and veering off to their destinations. The buildings of Canary Wharf once again basked peacefully in the sun. The river bus was plying its way along the Thames. Everything seemed to be as it should be. “Life must go on,” she ruminated to herself, “Can’t linger any longer.”

A week later, as she was lazily leafing through her daily national newspaper, a small headline jumped out at her. “Body parts found in dock.” Focussed now, she read on. “Last week, police divers discovered a torso and two sets of arms and legs in a marina in south-east London. The head and hands have not yet been located.”

Sarah felt herself stiffen. The blood drained from her face. She quickly walked to the balcony door and stepped out. No, nothing had changed. Everything was just the same without, but something had changed within her. “Was it the girl?” she thought miserably to herself. “Had he decided it was time for her to die?” She started to tremble with fear and dread. But of course, she might never know the answer. In such a depleted state identification of the body would be difficult. All roads could lead to nowhere. It was just another ordinary day in London.