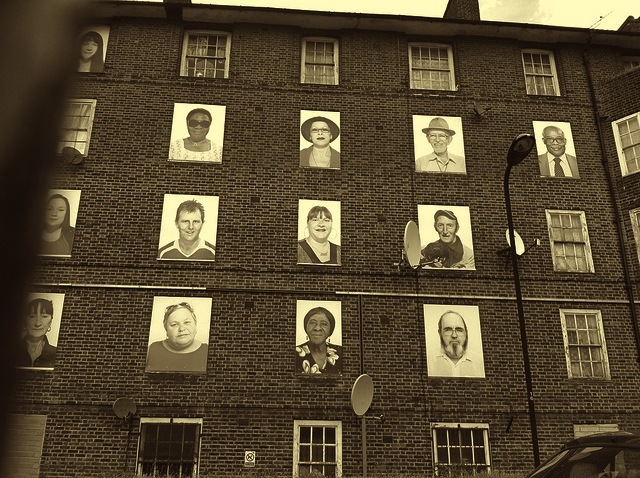 Continuing our series of short fiction set in, or influenced by London. This week, Stephen Lynch conjures the awkwardness of flat hunting.

This won't work, she thinks.

The four of them stand side by side, lined up along the kitchen counter, backlit by the late afternoon sunlight, while she sits before them at the table. They smile and finish each others' sentences and laugh and ask her if she wants coffee. Or something a little stronger, laughs the Australian, you being where you're from. She wants to tell them she doesn't drink though she doesn't want the reaction: But you're Irish!

And they're Australian, Indian, Polish and Japanese-American. It's like the UN in this place, says the Australian and they all laugh.

No, she thinks, this won't work.

They're all students themselves. Computer Science. English Lit. Economics. Drama.

Only hours before, she sat in another kitchen and listened to the warnings of a Chinese landlady. The room on offer was drab and the kitchen smelled of wet clothes. The old lady's tales of hoodies and joyriders made her uneasy. Before that she'd struggled with conversation and weak tea in a council flat in Brixton, hosted by a balding man in his forties who said she reminded him of his daughter. You've got her eyes, he said. He put his hands in his pockets, took them out again, then put them back in.

Her friend Abigail says London takes a bit of getting used to. But Abigail walks around like she runs the place. She has her own apartment and an English boyfriend. She's adopted a knowing cackle, throws her nights away in Shoreditch and talks of dropping out of college. You can crash on my couch for as long as you want, says Abigail and then asks if she's had any luck finding a place? Any luck at all? Things were different back home. Millennia ago.

We think of each other as friends, says the Australian and they all nod.

We want someone who doesn't just sit in their room all the time, they say.

We go on holidays together sometimes, said the Australian.

We went to Barcelona last summer, said the Pole.

She sees pictures they've taken of each other stuck to the fridge with cat-shaped magnets. Big smiles and peace signs. She sees similarities in the way they dress. Jeans and primary colours. Throughout the house their personalities are everywhere — the skirting boards along the hallway strung with Christmas lights, Chinese lanterns in the lounge, a salvaged mannequin propped up in the kitchen corner sporting cowboy hat and shades.

This won't work, she thinks.

She's almost certain there are sweat patches at this stage. She regrets wearing sky blue. As her face begins to ache, she wonders if her smile looks fake to them. She feels the edges of her mouth tremble a little from the effort. She wishes they'd look away for a moment, become distracted with something, so that she could clear her throat, shift in her seat, change position. Because with them all looking at her, all eight eyes of them, she feels any movement would signal her discomfort and that discomfort would have to be dealt with.

Oh hey, says the Australian, you should see the garden.

We have a make-shift fountain.

The four of them separate from the counter. She stands and the world tilts. Sunlight beams off the cutlery rack on the counter, coming at her in skewed angles. Her chair won't push back, the legs stuck in a groove in the tiles. She pushes and it tilts, she pushes again and it falls, cracking loudly. She stutters apologies, trying to step free of the upended chair legs as the Australian reaches to pick it up. Her head is still spinning and she steadies herself with a hand on the table. Her breath catches in her throat and she blurts some noise from deep inside her and she tries to hide it with a cough but suddenly her shoulders are racking and the tears come — hot and uncontrollable and unexpected.

The Australian picks the chair up and sits her back down. She covers her face as she tries to regain her composure. She worries about smeared make-up. Red cheeks.

They offer tissues and reassurance and cautious hands on the shoulder.

She looks up at them and sees nothing but sympathy. She sees looks of concern and knows she doesn't need to see anything more. She sees these people in their sincerity and sees how they could be her safety net as she stretches out, branches out, reaches out.

Maybe, she thinks. Maybe this will work.

No, they think, as they look down at her.

No, this won't work.