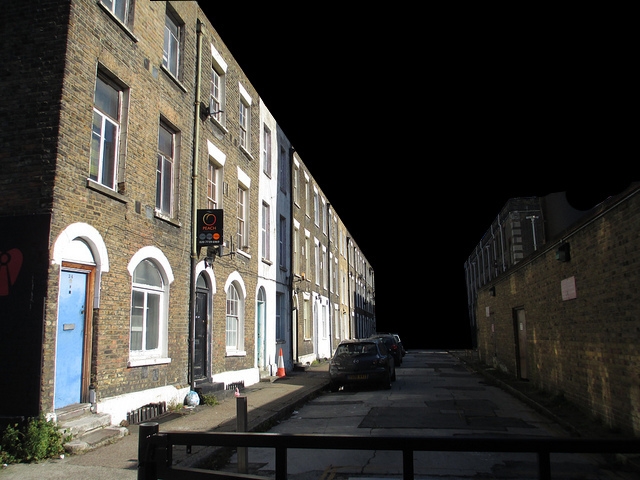 Our short fiction series continues. This month’s special theme is London Razed, visions of the city’s destruction in the past, present or future. This week, David Ritchie attempts some self-selected destruction.

The Man From BEER

Harrington Soames of 18 Puddingchop Lane, retiree and grower of prize azaleas, was going out to walk his basset hound Jeeves when a large man in a gray suit appeared, out of thin air, in front of him. The man carried a small black object like a cell phone in one hand.

‘Good morning, sir. I am from the Bureau of Edited Existence and Realities, or BEER.’

‘I’ve nothing against beer,’ Soames replied. ‘What do you do?’

‘We monitor your thinking, sir,’ the man explained. ‘And we’re eliminating the parts of your world that you don’t think about.’

‘On principle, sir. Everything has its existence in the mind. So if you don’t think about something, then it doesn’t exist. There’s no need to keep something that doesn’t exist, is there?’

‘Very well,’ Soames told him. ‘If I don’t think about things, they’re no great loss, are they?’

‘Precisely, sir. They’re unnecessary for you. So we’ve edited them out. They no longer exist. Look!’

The man gestured toward the ends of Puddingchop Lane. At either end, London had ceased to exist. A black plain extended as far as the eye could see.

Soames shrugged. ‘I don’t feel any different,’ he said.

‘Nor should you expect to, sir. Now, we wish to ask you a few questions, please.’

‘When did you cease to care?’

‘About the time my wife died,’ Soames recalled. ‘I was alone at home after that. Everything I needed was here on Puddingchop Lane – the bank, the market, the coffee shop, the doctor. All my friends and neighbors were here too – Mrs. Somerset on the corner, the Singh family next door, and the rest. So I stopped going beyond Puddingchop Lane.’

‘And at the same time, you stopped thinking beyond Puddingchop Lane,’ the BEER man pointed out. It was not an accusation; just a statement of fact.

‘Well, yes,’ Soames acknowledged. ‘That too.’

‘There was no need. I have my home, my garden, my dog, and my neighbors. Everything I need is here. Anything beyond that is too much.’

‘Understood, sir.’ The man was tapping away at his little device. ‘A few more questions, if I may.’

‘Do you read newspapers?’

Soames shook his gray head. “All lies!’ he said.

‘Do you watch television?’

‘Why? The neighbors tell me it’s just children chatting.’

‘Then what occupies your time, sir?’

‘The garden. Meals. Shopping at the market. Walking Jeeves, here.’ He gestured to the basset hound, who seemed not to notice the BEER man at all.

‘As I said, the rest of your London is gone, sir. If you could restore it, would you do so?’

‘Then do you wish us to make its deletion permanent?’

‘May as well,’ said Soames with a shrug. ‘Never did me any good.’

‘I’m required to point out to you what you will lose in that case,’ the man went on. ‘The British Museum. The London Eye. Trafalgar Square. Piccadilly. Baker Street. You will lose all of them, and more – all the historic and cultural heritage of a great city. Don’t you wish to save some parts of it?’

‘Not at all. What good did Nelson on his column ever do me?’

A few more taps, and the BEER man was finished.

‘All done, sir,’ he said. ‘For you, the rest of London has ceased to exist, permanently. As you wished.’

‘Good,’ said Soames. ‘But would you do one thing?’

Soames gestured at the black plain that started where the lane ended.

‘Could you make it some other color?’ he asked. ‘I’ve never liked black. It’s depressing.’

An additional tap on the gadget, and the plain turned white.

‘That concludes our business, sir,’ said the BEER man. ‘In a moment, I have to leave you and meet a lady who probably will ask me to wipe out her Birmingham. Have you any questions?’

‘Just one. You wiped out most of London. Do you feel sad?’

Jeeves did his business. Soames scooped it up and disposed of it. Then Soames – the destroyer of London – returned to his house and garden. His azaleas needed tending.