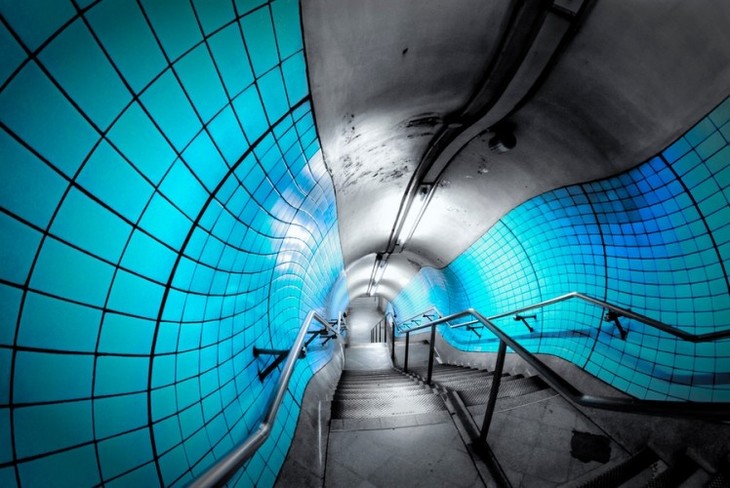 I hate this city, Marisol thinks as she rushes down the steps to the tube station. She has been living in London for a couple of months, and the city has managed to lose all its magic and charm in that time. It seems now a place of endless problems, frustrations and stress. She just wants to go home. I wish I could hop on a line to anywhere, she thinks.

Anyway, enough of that, she says to herself as she pulls out her Oyster card and taps in. You’re here now, and you have to make the best of it. Marisol runs down another set of stairs, trying to make sure she does not miss the last train. As she turns down a passageway, she suddenly realises she is heading in the wrong direction. “Oh no,” she says to herself as she turns around and runs back to the entrance.

Marisol turns the corner and finds herself at a junction of several unknown passageways. That’s weird, she thinks. I’ve never seen this place before. Maybe I went up the wrong stairs? Whatever, doesn’t matter. I’ll just find the signs and…

Looking up, she realises there are no signs. Anywhere. There are no signs above, below or on the walls. There also seem to be no people around to ask for directions. She pulls out her phone to check where she is, and she notices that she has no service. “Great,” she murmurs to herself, “just great.” There is no way for her to figure out where exactly she has gone wrong, especially now that she seems to have stumbled onto the only inch on the tube map without, well, maps. “Great. Thanks again, London,” she grumbles.

She sees a woman approaching, walking very quickly and determinedly. Relieved, Marisol begins to ask the woman for directions when the woman stops, looks directly at Marisol, and asks, “Are you Marisol?”

Marisol is taken aback. How? Who? But the…

The woman sighs impatiently. “Are you, or are you not Marisol? Moved here a few months ago? Attends the university, works at the coffee shop, generally hates her life in this city, etcetera?”

“Um, uh…” Marisol sputters. “Uh. Yeah. Yes. Yes, I’m Marisol,” she says finally. How does this woman know who I am? Is she someone at the university? Is she at the coffee shop? I would have remembered those glasses at least. How could she…

“OK, good. Quickly now. We’re going to miss the train. Hurry, hurry,” the woman says, indicating with a flick of her fingers for Marisol to follow her down one of the many passageways. Normally Marisol would not follow a stranger, but the sudden emptiness of the Underground feels as if it is slowly creeping over her in a deeply chilling manner. Movement, even uncertain movement, seems a better option than stagnation.

“So, which line do you want to take?” the woman asks as she walks down the passageway.

“I’m supposed to be on the Northern line heading south, the, uh, the Bank line,” Marisol says, trying to keep up with the woman, “but I think I missed the last train.”

“I didn’t say which line you’re supposed to take, I said which one you want to take,” the woman replies, her voice tinged with annoyance.

The woman stops and looks at Marisol. “You said that you wished you could hop on a line to anywhere. Well, Anywhere is pulling up at the station in a few minutes, so we have to hurry. Once you’re on, you tell the conductor which line or lines you’d like to take to Anywhere, and it’ll take you through that route. Understood?”

Of course I do not understand, Marisol thinks. What is happening? Maybe I have fallen asleep, exhausted, on a train seat, and I’m dreaming this entire scenario. Yeah, that makes more sense, she thinks. Marisol often finds herself too tired to fight the chaos of London at the end of the day. “Who are you?” Marisol asks.

“Like a fairy godmother?” Marisol blurts out, immediately realising how ridiculous she sounds.

“Ok, I see this is going to take a while, and we simply have no time. Here,” Ada waves her hands, and a tube map appears suspended in mid-air. The map is…alive, marvels Marisol. There are miniature trains moving along the lines, the stops contain entire cities within each dot and the indices are shouting directions at one another. “Now, look at the centre of the map, relax your mind, and off you go,” Ada says, snapping her fingers together.

Marisol feels herself swiftly sucked into the map. She is in the tube system. She is rushing through every line, getting off at every stop, whirring from neighbourhood to neighbourhood and town to town. She is simultaneously experiencing every line on the map, every destiny, every outcome, every result. Nights out, Sundays in, take outs ordered, concerts, parks, pubs, football, arguments and conversations and jokes over pints, frustrations and disappointments and joys and discoveries, small alleyways, leafy expanses, humid summers and crisp autumns, red buses, black cabs, grey skies, swirling clouds, crooked buildings, shiny buildings, hope and despair, endless problems, frustrations and stress, yes, but also rewards and breakthroughs and opportunity and magic and charm and wonder and the surreal and fantastical, a sense of belonging, a sense of home, and...

“So, which line do you want to take?” Ada repeats.

Marisol snaps back into the present. She thinks about everything she has seen: the endless possibilities, the challenges, the joys and sorrows, the pay-offs and trade-offs and gambles and…

“All of them,” she answers firmly.

“Good,” Ada replies, allowing a slight smile for the first time. “Let’s get started then. Welcome to London. Quick, quick.” They hurry down the passageway, Marisol trailing Ada, following the signs to Everywhere.