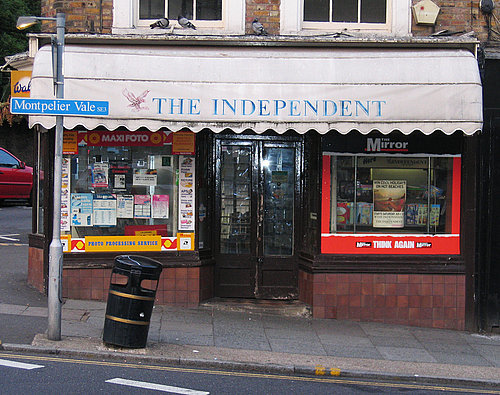 Continuing our series of short stories set in, or influenced by, London. This week, Tom Mitchell offers another extract from the diary of a washed-up actor, who you may remember from an earlier story.

The route into Blackheath Village from Lee High Road takes you (me) up an attractive, albeit knee-achingly steep, tree-lined road and, if the sun is shining and you’re particularly lucky, you might momentarily forget that you’re in South London. And, one morning, walking this walk, I marked young parents with prams and OAPs with handbags and I greeted them all, regardless of age or colour or gender (although all were white women as this was Blackheath).

And, you know what, I hadn’t even entered the village’s ‘Hello Matey’ newsagent* before I found myself approached by a young woman. Autograph hunter, I thought, and I smiled a self-deprecating smile. We were mid-pavement.

She was short (up to my shoulder), pretty (nose especially) and wide in the appropriate areas (boobies). She wore strange, outlandish clothes: red baseball cap, a red (& plastic) blazer – both inscribed with a most troubling phrase – CHURCH AID.

‘Have you ever thought about starving children?’ she asked with rising inflexion.

‘Do you ever think about starving children?’ she repeated, even furnishing the question with a smile.

She nodded, waited for five seconds, and then continued as if my response hadn’t been witty/LOL-worthy.

‘During the time we’ve been speaking, 540 children have died in Ghana’, she said. ‘For just a few pounds a month, you could help prevent these unnecessary deaths.’

And then she asked my name. And so I told her my name.

I also communicated my doubts as to her statistics and I told her that I didn’t know where Ghana was anyway and it sounded rubbish wherever it was anyway and the kids were better off moving somewhere else anyway.

She assured me that her numbers were correct. She told me that Ghana was in West Africa and wasn’t rubbish. She asked if I wanted to set up a direct debit mandate. Two pounds a month would be fine, she said. Think of it as a pint of beer, she said.

‘Honey’, I spoke loudly, fearing that my words would be lost over the hum of Blackheath traffic (we were also close to Blackheath Station, so I was aware that at any moment a train could pass under the railway bridge that lies village-central. That, of course, would create an awful cacophony of pistons and screeching and the like and make communication entirely unworkable. It’s impossible to fall in love on a railway bridge.) ‘Honey, I don’t know what kind of cheap-ass bars you visit, but, regardless, I simply can’t spare any amount of money. I’m an unemployed actor. I should be approaching people on the street and asking them for money’ (not a bad idea?).

The stiffness of the woman’s face melted somewhat. The smile, once a dodgy three-bar fire, now seemed open and loggy. She spoke:

‘I’m an actor too. Where did you train?’

I waited for a woman with 72 shopping bags to push past us. Railings separate road from pavement in Blackheath, so it’s always fairly congested – carrier-bagged women notwithstanding. I mumbled something about New York and quickly asked where she’d trained before my lies could be unpicked.

And so I fell upon a plan. Decision making, such as this, was proactive. I wouldn’t get my career back on the road by sitting in the flat and eating cheese/watching pornography all day. The show-business train is driven by contacts, Reader. I couldn’t turn down such an opportunity as this fair woman presented. I could pick her mind and such like and so forth.

‘I’ll sign up for fifty pounds a calendar month’, I said, ‘if you’ll have a drink with me'.

She laughed so hard that red hat almost fell from blonde locks. I looked about, not wanting to ‘cause a scene’. Mothers with prams of frowning babes frowned from across the road.

‘I thought you were out of work.’

I filled out her direct debit mandate, fully confident that I would cancel it as soon as I’d had a drink with/gammed/pumped (for information) her.

She kissed me on the cheek, happily explaining that my contribution would inflate her day’s wage. Wordless, I mumbled. She seized my hand (in a misjudged attempt to be eccentric, I fear – she could have just spoken the words) and wrote ‘IPMA Pall Mall 1930 Nick’ across its forgiving flesh.

My eyes studied her features/body and were eventually satisfied of her gender.

And so I left Nick.

And so I bought The Stage.

And so I was greeted with ‘Hello Matey’.

And all seemed well in the world.

Five hours passed as I flicked through The Stage. There was many an advert for table dancers. Not many for serious actors, such as I am.

In bedroom, I placed over my body some of the sexiest clothes owned. I hadn’t been with a woman for over a month. Clearly this was a ridiculous situation, as I would even hear the upstairs neighbour occasionally ‘at it’. And he suffered a growth on the side of his face and wasn’t a nice person.

Head – nothing but some gel.

*This is not the newsagent’s official name. This I call the shop as the proprietor always greets me with a stout ‘hello matey’. This is not unpleasant. I do not complain.

We’re still looking for London short fiction stories. Please continue to send submissions to fiction@londonist.com. Entries must be no more than 1,000 words, and must be set in London, or strongly inspired by the city. Full details here.