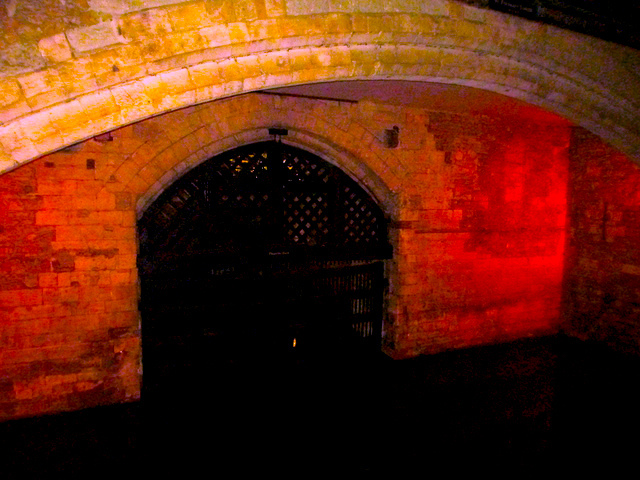 Our short fiction series continues. This month’s special theme is London Razed, visions of the city’s destruction in the past, present or future. This week, Jonathon Dean finds that the buried River Thames is the future city's Achilles heel.

I come to with a jolt as cold, fetid water is thrown in my face. My vision is fuzzy. It’s dark. The back of my head hurts.

I have a vague memory of the morning, if it’s even the same day. Surveying beyond the wall at Loughton for the proposed expansion, and everything suddenly went black. Must have been hit on the head, I guess.

I screw up my eyes and try to focus my vision. It doesn’t work, it’s still dark. The world doesn’t feel stable. I find I’m handcuffed to a short metal bar. I throw up.

“Watch it, Londoner,” a voice says. It’s rough and deep, but female. The accent I can’t place, but definitely northern. The kind of harsh northern that you know could tear your self-esteem down in a heartbeat. “Stinks well enough wi’out you spewing up everywhere.”

She’s right. It stinks. I hadn’t noticed that. Sewage and chemicals.

The world rocks gently back and forth, and I realise that it’s not my head spinning from the blow. We’re on a boat.

“Wha-where…” I splutter, the sickly tang of vomit still at the back of my throat.

“Aww, don’t you recognise home when y’see it, son?” the woman says.

Home? This, what, sewer? This underground river? This polluted…

“The Thames?” I gasp out loud as I realise. It’s been covered since I was a kid. Sunken like the Fleet. Built over with towering skyscrapers to meet the ever-spiralling demand. “How… how did…”

“The barrier?” she asks. She reaches down and pulls me upwards savagely by the hair. I can see her in the flickering light of the battered electric lantern she holds in her other hand, see her dark hair and her grizzled face. “What d’you think you’re here for, love?” she says, her foul breath threatening to empty my stomach again.

I suddenly remember that I was registered as outside the wall. My bio-signature could open any of London’s entryways. It could let them into the city.

“Don’t worry, we’re not stayin’,” she says. A whistled pattern of seven notes echoes through the tunnel. They sound familiar but I can’t quite place them. The woman whistles six notes in response. What is that song? I remember it from somewhere, but my head’s still so fuzzy.

“Charge sixteen,” another voice says. It’s a boy, a kid, probably around seventeen, but his voice is far deeper than his drawn face suggests.

“You work for Terminus, yeah? The wallbuilders?” the kid asks me. I stare at his pale, gaunt face flickering in the knackered light and nod.

“This is your fault then, mate. Want you to remember that.”

“Tom, shut up, and check seventeen,” the woman scolds. He grunts and disappears behind me where I can’t see him.

“Your job bricking the rest of us out of London,” she says.

“We couldn’t keep letting people in,” I protest. I try to shout, but my voice refuses to cooperate. “It was overcrowded already, the jobs were all filled up, but people kept coming and coming!”

“So you locked us out,” she says calmly. Her gravelly voice injects a level of rage and menace into the sentence that hardly feels possible. “The one place left in the country where a person can earn a livin’, and you locked us out.”

Another whistle. Seven notes. She whistles the six-note reply; two sets of three rising notes. Fall-ing down, fall-ing down…

London Bridge is falling down, my fair lady.

“I bloody can,” she says, all calmness gone.

“There are buildings above the river! Skyscrapers! Hundreds of them!” I scream.

“But you’ll kill millions!” I shriek hysterically. Part of me hopes that someone above will hear my yells, but I know they won’t.

“Your wall’s already killed millions,” she says, that blood-curdling tranquillity back in her voice. “And it’ll keep killing.”

“I...what? I don’t understand!” I splutter, my voice hoarse.

“What the hell do you think we did after you sucked all the jobs to London and then locked us out?” she says, directing a furious gaze into my eyes. “We starved is what we did, son. Thousands and millions of us.”

I try to speak, to argue, but I can’t. Everyone in London knows; it had been them or us, and we chose us.

I breathe in and out slowly. The fetid, stinking air filling my lungs. “The…buildings will topple sideways, won’t they?” I ask, my voice quiet and quivering.

“Which will also fall sideways.”

“My…my daughter…” I say. My voice cracks, and tears cloud my eyes.

“It’ll be quick,” she says. She turns her blue eyes on me, and I see the cold fury in them as she adds “quicker than mine got.”

My face screws up and I begin to cry. My mind can’t take this. I’ll never see my Jessie again, and the millions and millions…

“One more and we’re out. And it ends,” the woman says. I think there’s a sigh in her voice that wasn’t there before. Maybe she’s having second thoughts, or maybe I’m just imagining it.

The next few minutes pass. The silence broken only by the sound of my sobs.

Another whistle. The boat’s motor roars.

We hit daylight and pass the barrier. No restrictions on getting out. Why would there be?

Blinking back my tears, I take one last look at the skyline that is so familiar, that I love, that is home to everything, as the woman clicks a tiny red button.

London Bridge is falling down.

We’re still looking for London short fiction stories. As part of the current special theme, we’re particularly looking for stories in which London is destroyed. Please send submissions to fiction@londonist.com. Entries must be no more than 1,000 words, and must be set in London, or strongly inspired by the city. Full details here.