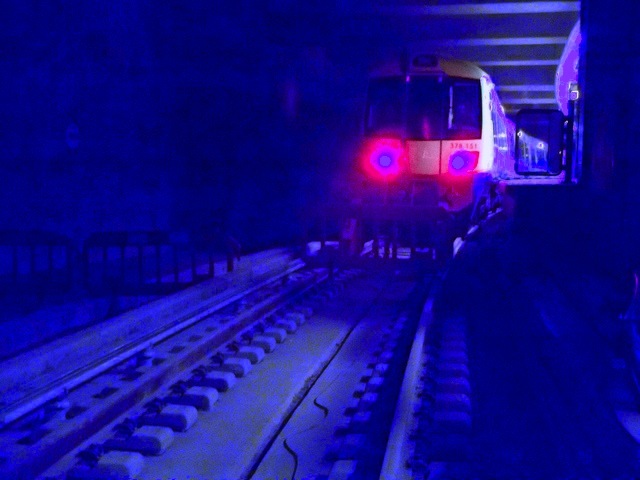 Continuing our series of short fiction set in, or influenced by London. This week, Richard Lakin attracts the attentions of the British Transport Police.

The ground began to tremble as I stooped through the hole in the fence. Spent matches, tins of lighter fluid and crumpled cans of cider were strewn round my feet. I spread the cans out evenly with my boot as the rails began to sing. This was the point where passengers would be shrugging on their coats, shutting down their laptops and hefting their luggage. You saw them pointing out familiar landmarks, noses pressed to the carriage windows. They might notice Wembley, or the Pirate Castle or the Roundhouse, but they didn’t see any of this.

We’d spend hours down here as kids. We played chicken, daring each other to cross the tracks, waiting it out till the horn sounded or the train lights shimmered through the mist. Sometimes we laid out two pence pieces on the rails and waited for a freight train to thunder through and flatten them as thin as playing cards. The fence had been patched and mended many times, but it didn’t stop them coming. Brittle flowers, perished and brown, little more than stalks, were tied to the posts with twine. Shrines had sprung up. We didn’t encourage them, but no one wanted to be seen removing them either. I traced a photo with my fingertip and felt the squeak of cling film that’d been stretched to protect a freckled, smiling face. Stubs of candles lay in the leaf mulch.

It could so easily have been my story — the night the driver or guard or someone had spotted us and phoned the nines. The transport police came on blues and twos, puffing and cussing their way down the embankment, torch beams playing across the brambles and nettles. Their favoured trick was to blast their sirens and take the block twice at speed hoping we’d cut and run, spare them a foot chase. Somehow, this time we’d got hemmed in, me and Gary. A fat cop, who had to be fifty, with a coppery moustache and a neck pinched by his collar, got within grabbing distance. We took off. He went arse-over-tit, plastering his trousers in treacly mud and then telling us he’d break our necks if he got hold of us. His mates had shouted and loosed off the dogs. I’d bolted over a fence making for the canal, thinking I was pretty clever for running a lock gate and crossing water, until the dog jumped in and started to swim. The dog snapped and growled, backing me into a corner until another cop came and cuffed me. They sat me in an interview room surrounded by posters warning me that thieves were about.

‘Your folks are on their way,’ the cop with the fat neck told me. ‘They don’t sound happy, sunshine.’ When I said nothing the cop said: ‘Bloody stupid if you ask me.’

The cop gripped the edge of the table and put his face inches from mine. His breath smelt of TCP. ‘Full of it, aren’t you?’

I didn’t answer. He opened the door, fingers drumming on the frame and shouted, ‘Snowy! Get your arse in here.’ Snowy ambled in and was told to watch me.

Snowy kept fiddling with his collar, scratching his shaving rash. A few minutes passed and then Griff barged through the door, slapping a thick ring-bound folder down on the table. ‘You can clear off,’ he said and Snowy nodded and left. ‘You want to play at being a smart arse?’ He tapped the folder with his finger. I said nothing. ‘These kids played at being smart arses. Look what happened to them.’ He opened the folder. I can still see that first image: eyes staring up at me, a leg scythed in two beside the track. He licked his fingertip and turned the page. He showed me another and another until I looked away. I can still see them, all of them.

I was screwing the cap on my flask, blowing plumes of breath at the sky, when a figure passed by, picked out against the moon, up on the bridge. I knew we were in business. He bowed his head and stuffed his hands in his pockets as a car shot past bathing him in its headlights. I heard the rustle of nettles, and the sniffs as he got closer. He ducked through the hole in the fence, rolled his hat down till it reached his eyebrows. The cans I’d spread clattered and he cursed and froze. I kept perfectly still. He sniffed the air, angled his head like a dog listening. I let him get down the slippery bank and dart across the tracks to the depot.

‘He’s coming right at you,’ I whispered.

A click meant I was heard. He crouched and rummaged through his bag at trackside. He took a quick glance over his shoulder and got to work. Lamps pinged on, casting his shadow twenty feet across the depot wall and the fuzz of electric blue where he’d begun his work. He thought about running, but he was surrounded and raised his hands, dropping the aerosol can like it was a gun. Keith cuffed him and we led him to the car. He stared at my reflection in the rear view mirror. He was pimply and pale-faced, fourteen if he was a day. I radioed Control, told them we had one coming in for criminal damage.

‘I’ve something to show you. It belonged to a friend of mine.’

He rolled his eyes.

Copyright, Richard Lakin, 2013. Find him at richlakin.wordpress.com and @Lakinwords. Image by M@.