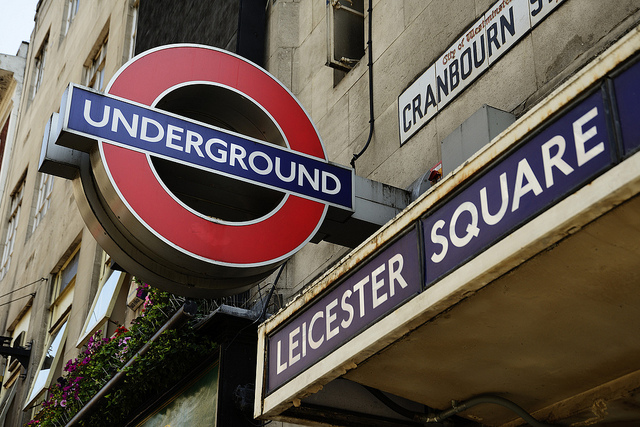 Our short fiction series continues. This current theme, finishing today, is London Razed, visions of the city’s destruction in the past, present or future. This week, Darren Lee brings plague to Leicester Square.

Charing Cross Road was full of the dead.

Ronson was carrying his guitar and amplifier from his morning patch inside the Safe Zone. He held his breath for the approach to Leicester Square tube. The stench in the air was unpalatable; loosened bowels and stale meat.

A family of smiling tourists blocked the temporary path that had been cleared through the corpses. They carried bags from M&M World; the yellow matched the heavy machinery busy clearing the scene.

A man walked out of the station towards Ronson. They moved aside for each other and became locked in a macabre pavement dance to allow the other past — a small courtesy in the face of death.

The man clutched his throat and sank down. He never felt his kneecaps shattering because he was dead before he hit the ground. Ronson could hold his breath no longer. He stood at the station entrance greedily sucking in air.

A couple barged past him and out onto the street. Ronson began to count to ten; by the time he had reached seven, the couple had added their lifeless bodies to the pile.

On the first day of the crisis Ronson had been busking in his afternoon spot at the bottom of the Piccadilly line escalators. Crowd pleasers: Elton John, a Queen medley, some Coldplay. This patch was the most lucrative busking site in the city, but the escalators had been closed for weeks of upgrading.

Boris himself had been there that morning to officially unveil the results. He shook hands, posed for the press and heralded a new era for London. Hours later he would be one of the first to visit the scene of the disaster, wearing a hazard suit, appearing like a ragged scarecrow in a field of death.

The crowds who ascended to street level displayed their usual apathy to Ronson's music. Ronson didn't care; he made more money from those on the down escalator. However, on that day there was a dearth of coins at his feet, and those few who headed towards the platforms looked shocked and afraid.

A worried crackle announced that the station was closing with immediate effect.

Ronson packed up his things, irked at his meagre takings, but he understood when he encountered the panic and confusion on the other side of the ticket barriers: almost everyone around him appeared to be dropping dead. A handful of confused and terrified people were still standing. They tried to navigate their way around the fallen, unsure of whether to offer aid or to flee.

Ronson fled. He didn't stop until he reached Trafalgar Square, away from the outbreak of death that had erupted close by.

The authorities immediately quarantined the area. After a fortnight no one had claimed responsibility, and officials were baffled.

Eventually the Mayor appeared on television, announcing the reopening and appealing for a return to the famous Blitz spirit.

People continued to die the moment the station began operating again, but the Mayor was adamant that life should continue as normal. Those daring to travel to Leicester Square took their lives in their own hands; lives that, for many, didn't last long afterwards.

The other buskers stayed away, but Ronson believed himself immune to whatever plague had set up residence in the West End. He continued to play for the disembarking passengers, providing comfort in the potential face of death. A few were foolhardy danger-seekers but many had deliberately alighted there as a form of suicide. Ronson could spot the ones with a death wish; they would watch him play before laying all their cash at his feet. Sometimes they survived, but they never asked Ronson for their money back; close-proximity to death had become profitable.

Ronson watched the passengers to try to work out the common denominator that divided the living from the doomed. He knew the deaths had something to do with the station, but he couldn't shed light upon why he still saw tourists everywhere, as if they had escaped the fate that had taken more naturalised Londoners.

It hit him halfway through a chord change in Rocket Man. Ronson stopped playing, eager to test out his theory at the next opportunity.

He didn't wait long. A nervous couple emerged from the platform and shuffled towards the escalator. Ronson followed them; they stood abreast, the woman on the left, the man on the right, hands linking the two; illicit daring lit up their faces. Ronson held onto his equipment as usual: amp in one hand, guitar in the other.

He discerned a frisson of elation from them as they cleared the turnstiles unscathed — the thrill that they may have cheated death. Ronson had felt this too.

The couple made their way to the top of the stairs by the Hippodrome. Their elation intensified.

Ronson counted to five before the man was dead. The rictus expression on his face and the weeping woman beside him both asking a terrified "why?"

Ronson knew. It was because the man had stood on the right of the mayor's shiny new escalator. He guessed that it was some kind of toxin, initially timed to go off, and ingested though the hands of everyone who grasped the offending balustrade. He returned and watched more passengers ascend; they all conformed to Ronson's theory.

Ronson headed home, lugging the tools of his trade, pledging to wear gloves from that moment on.

Once inside the safe zone, he was thrust an Evening Standard by an over-zealous vendor. He read the headlines: A property bonanza for London as the houses of the dead hit the market, foreign investors being courted, and the Mayor announcing the next phase of escalator upgrades with the cheerful bonhomie of a wicked uncle.

Ronson felt his pockets bulge with the coins of the dead. There would be a lot of cleaning up to do.