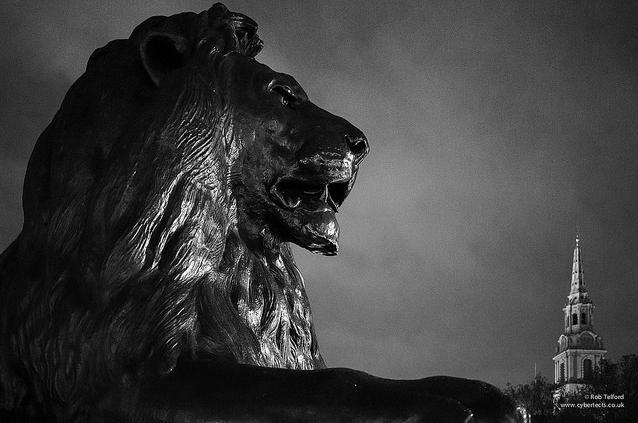 Continuing our series of short fiction set in, or influenced by London. This time, Robert Chell, age 12, finds something strange about Trafalgar Square's lions.

Rook was huddled up next to a cold lion statue in Trafalgar Square when Big Ben struck three. He woke to a silent night, frozen to the bone. His joints ached with cold so he got up to move around. Then he thought he heard deep breathing. He looked around and saw a gigantic yawning lion. At first he thought the cold was giving him hallucinations, so he walked over to the face of the lion when suddenly the lion opened one eye. Now he was convinced it was real so he ran and shouted "It’s alive! It’s alive!". A street-cleaner heard him but just shook his head and walked away. Rook was so tired and aching now that he just couldn’t run any longer, so he started to crawl. He looked around and saw the lion that had once been a cold statue, walking towards him. He felt the ground tremble as the lion growled, it sniffed him and then darkness wrapped around him.

The street cleaner worked his way across Trafalgar Square, looked down and saw a puddle of blood. He looked around for the mad man who had shouted, "It’s alive! It’s alive!". He was nowhere to be seen. For one moment he thought the man he heard wasn’t mad at all and that maybe there was something that was alive. He walked up to the lion but then he thought again. "That man must have been mad to think there was something alive at this time of night. It’s getting on for 3.30. I’d better go." He rolled up the piece of cardboard Rook had been sleeping on, put it in the bin and walked away.

The following evening as the sun was coming down, Joe saw that spot next to the lion where Rook had been sleeping the night before and murmured to himself, "Yes! I have been waiting for this space to be free for ages!" He walked over, laid down his cardboard next to the lion, and went to sleep…

We’re also now looking for short stories both for and by children.