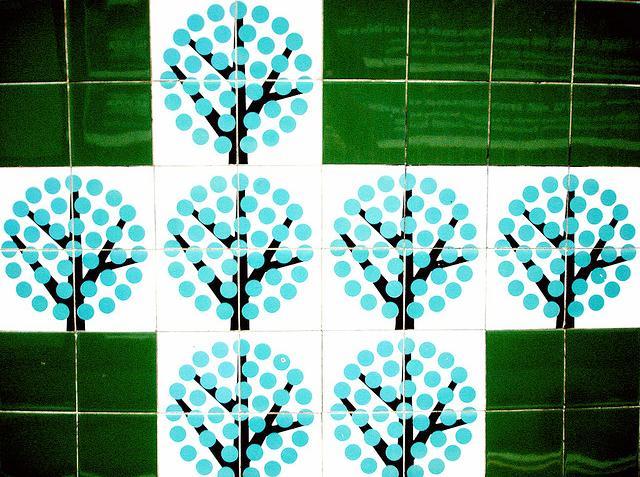 Continuing our series of short fiction set in, or influenced by London. This week’s story is by Helen Shay, on a hunt for a lost sister and lost love.

"Six is an unlucky number!"

Madeleine bellowed at me. Because she’s the eldest, she thinks she’s in charge. It was the same when we assembled in the tunnel at midnight.

I shuffled uncomfortably on the line. The silence was suddenly interrupted as a train passed through us. It blinked with electric light, in which we saw its matt passengers — weary party-goers — heading home. It didn’t look like it had been a very good party.

When it had gone, the sisters — Madeleine, Marianne, Margaret and even meek and mild Mary — all ‘tut tutted’ at me. Their ‘tuts’ were loaded with subtext. 'Why didn’t you look after baby sister? You know Mo’s the youngest and flightiest of us. It’s your fault she’s gone missing, May.'

What could I say? It was true. Another train came into the station, stopping this time. We all froze and subdued our glimmer. It wouldn’t do to let the matts glimpse any sign of us, now we were into the witching hour and the full glamour was upon us. Poor humans with their matt lives, they could never guess what is was to be born gloss. How they would envy our freedom, if they knew the fun of being fae! Sometimes we’d remember our country cousins, frolicking among wild flowers in woods at midsummer. But we had chosen the city life. The underground was our home. And we loved London.

The sisters huddled together, as the matts left the train. We’ve always been grateful for that kind man who booms out, ‘Mind the gap!’ It gives us space, so they don’t all charge through us as they disembark. Not that we’d feel anything, but it’s an invasion of privacy having commuters step into you. They of course never notice us, except for the odd one with a special sense, but even they can’t quite make us out and dismiss us as tricks of the light. But we are modern-day fairies, the ultimate in urban myth!

As the train doors slid together, I took my chance to sneak on board. Let Madeleine rage! At least I’d try to put things right. I missed Mo. We’d been so close until that crazy row. How could we let something like that come between us — a boy?

I spent the night travelling the underground. I asked the elephant at the castle if he’d seen anything. He’s got a great memory. He’d heard of Mo being sighted behind the shepherd’s bush but when I got there, there was no sign of her. I tried the black friars but with their vow of silence, they weren’t much use. There was nothing for it but to consult the angel — the nearest we have to any oracle, only she insists on talking in pidgin rhyming slang, pretending to be cockney.

"I’ve been on the dog and bone to every sprite and spirit in zones one to four. They’ll keep their mincers peeled and have a butcher’s for her. I suggest you get off your Aris and use your plates, Mae the Fae!"

"You’re an angel," I said, thinking ‘thanks for nothing’.

Maybe the King could help. But he’s so superior since the matts revamped his station. He thinks he’s real royalty now and wants to drop the ‘cross’ from his name. Instead I took a walk (or ‘Duke of York’ if you’re a wannabe Bow bells angel) down Euston Road to the British Library. All that knowledge there, someone must know something. So I tried Pythagoras, that lumbering carved hulk outside the entrance.

"You came to the right person," he said. "After all, I know all about triangles."

Afraid he might give me a maths lesson, I explained I just wanted to find Mo.

"Exactly," he said. "And I have just the theorem for you!"

This was going to be hard work.

"After all, we are talking of love triangles here, aren’t we?" he whispered.

"Then you know where to go," he said.

"Up your hypotenuse!" I muttered.

But I knew he was right. I went where I should have started my search. It was still too early for many matts to be out, even those booked on Eurostar. The palatial hotel was quiet. I weaved my way onto the deserted terrace at the back. A few yards away were the lovers.

Living in London, you get to know a lot of art and sculpture. Even so, those two always took my breath away — frozen as they were forever in that bitter-sweet embrace of union and parting. "You’re too much of a romantic!" Madeleine always said. But I like to think of myself as a ‘Romantic’ with a capital ‘R’. And you would have to be made of stone yourself not to be touched by the sight of that statue.

"May, what you doing here?" murmured a frightened voice.

It was Mo. She was knelt by the wall, scared and tearful.

I ran and hugged her tight.

"I couldn’t help falling for him as well," she said.

There he was — that gorgeous young soldier with the halo that glimmered brighter than anything I’d ever seen.

"As I do everyone," he continued. "But I’m far too busy being a saint to have time for girls."

Pancras gave us a wink and we left. On the Victoria line with a few die-hard buskers and shift workers, Mo and I cuddled, invisible to the matts.

"Fancy putting a crush before what we share!" Mo said.

I smiled at her wisdom. Perhaps it was I who had been the one lost, even though she ran away. Now we would always be seven sisters. That was a lucky number.

We’re still after your stories — particularly about London's green spaces — which you should send to fiction@londonist.com. Entries must be no more than 1,000 words, and must be set in London, or strongly inspired by the city. Full details here.