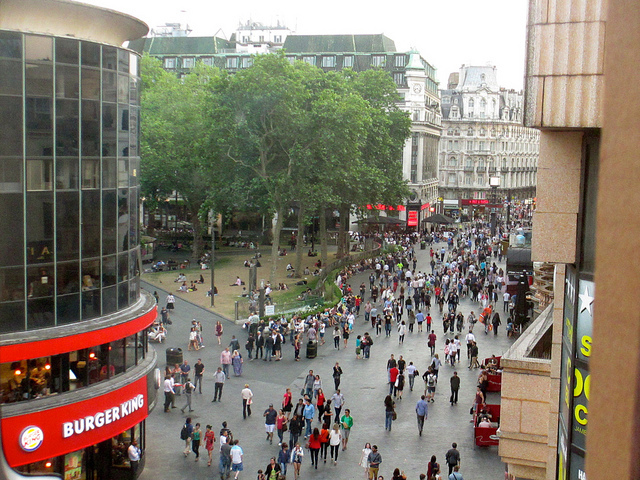 Our short fiction series continues. This month's special theme is London Razed, visions of the city's destruction in the past, present or future. Our first doom-monger is Seth Insua, who finds an unlikely destroyer of the city.

Back before London broke to black, you might have seen her. Old Maureen Stein, checking thrice when she crossed the road, drivelling babble on the Northern Line, heaping coupons at the checkout. The kids whispered. She was a normal old lady, really, though she didn’t look it with her beanie flop perched atop a bird-nest frizz, arched nose and grizzled chin, frail frame amassed in brown-black folds. They called her a witch; actually she was a pensioner on the turn. Hardly the kind of woman to obliterate a city.

Perhaps her vulnerability was her strength, or at least gave her wish its bite. Or perhaps it was the opposing forces at play that year, that day, like a chemical reaction: the collision of old and new that textures London so romantically, that compelled Maureen into the city centre, led her into Leicester Square and the bright lights and echoes of her youth.

Maureen was lost. It was a changed world. The sweet smells of Chinatown had soured. Mashed fries and ice cream smeared the pavements. Crowds jolted her like dodgems. Where was the scintillating magic of that candlelit bistro where she’d proposed to Laurie? What had become of the little café where she’d discovered espressos and sketched her award-winning ads? She meandered in and out of Upper St Martin’s Lane, edging to her old agency, afraid to pause in case she was knocked over.

And then, crossing the road, it happened.

She stopped halfway, ablaze with fear, eyes wide to the bustling crash-bangs, the hoots and hollering, the driver shouting, Hey, lady!

This wasn’t right. It wasn’t home; it wasn’t even life. She wanted it pulled down. It had no meaning anymore, no longer her reality; it existed only in mockery of itself, of a time in her life that was dead and buried and decomposing by the day. And Maureen felt, as she covered her ears with her hands and screamed for the people, for the whole city, to disappear, that this was a moment of clarity.

It was a wish that struck in her throat like a match, ignited. She shook her stick at the sky. And somewhere, something listened.

There was no effect. At first.

Mistaking her for a god-forsaken homeless person in need of a hot meal and a bit of good luck, a young Executive Assistant came to her aid. She took his arm at once, commandeering him like a ship. She demanded he cleave a path through the heinous riffraff to the tube. He ended up having to accompany her all the way to the platform before he managed to escape.

Maureen glared all the way home. At the tourists on the tube. At the pregnant woman with zebra hair. She glared at Mr Patel when he wished her a lovely evening. She glared at her front door as the darkness followed her home, and at every laboured step up to her flat on the first floor.

She snuffed, ‘Good riddance', as she fell asleep to Wagner on tape, thinking of her late husband and ripe for new life.

She couldn’t tell the time when she woke up; it was too dark and her digital was dead. The lamp was gone too. Power cut. The silence was louder than the ordinary planes overhead, the feral foxes on the walls outside. She sat up, and the rustle of her duvets went straight to her heart as she tugged them up to her neck.

And then the sound that had woken her: slow, rhythmic footsteps, somewhere outside the door of her flat. Only they weren’t like footsteps at all. They were lighter, each impact a kick of air, a reverberating piff-paff of steps. Like feet on a beach, only the sand is hanging in the sky, loose as a cloud.

Maureen couldn’t swallow, could barely breathe. If she could only see, she’d feel safer. She waited and waited for the steps to stop. When they finally did, she wiggled her feet into the slippers by the bed and wobbled up the three stairs to her kitchen. Trembling, she went to a drawer, retrieved a thick candle and armed herself with the comfort of illumination.

She turned to survey the front door. It gloomed in the dark. Did it come towards her, drift like a ghost?

She picked up the phone, thinking of her daughter. It was dead.

She was on her own. Except she wasn’t. Her skin prickled with the knowledge that there was someone, or something, waiting for her outside. Hands shaking, she took a saucepan, stood beside the door, leaned against the wall. Waited for the steps, for them to come for her.

But now there was only silence.

Hoping, praying to be safe, she crept to the window and peered out into Fen Street.

Nothing but the dark. No streetlights, no cars, no road. Just the blackest blackout beyond the window frame. Maureen felt that she was falling forward. She seized the wall to steady herself. The saucepan clattered to the floor.

She couldn’t believe her eyes. It was like she was in outer space. She told herself it must be some impenetrable fog. No moon to cut through the blindness. No life wandering the night.

She went to the next window. Then the one at the back of the flat, looking down onto the garden. But it was gone. She held her candle out into the dark.

An unholy horror churned her, drove her to the front door. She opened it and stepped forth into the nothingness. Her candle couldn’t light up the void. Her city was gone. The darkness was its grave, and Maureen whispered, ‘Is this death?’

The door shut behind her and there was nothing. She scrambled for the handle; her candle merely lit her own two hands. She couldn’t walk, suspended in empty air.

She cried out: that noise again, closer now, closing in for the last of London.