London Short Fiction: Instant Karma On The 263 To North Finchley 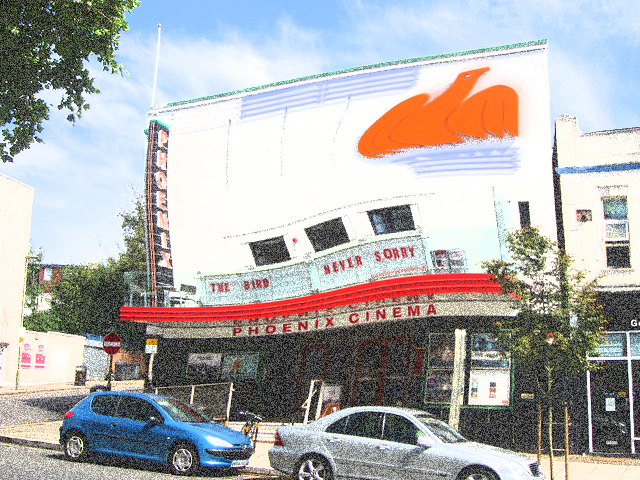 Continuing our series of short stories set in, or influenced by, London. This week, Ronnie Capaldi captures an experience that most of us have been through. See the foot of the page for a new call for stories themed around Year of the Bus.

Instant Karma on the 263 to North Finchley

A stunning orange sunset had painted north London in pastels as I looked down on East Finchley tube station from the top deck of the 263. The rush hour bus was packed with shoppers, office workers and a cross-section of human life that only London can so easily assemble. A sober quietness persisted. The only noise was from the angry fingers of tree branches hitting the window panes, then running along the entire length of the bus.

I was sitting in a window seat about half way down. The seat next to me was newly vacated, and I was now the only person on the top deck to enjoy the luxury of a seat to myself.

The bus pulled in at the next stop, opposite the old-world style Phoenix Cinema. I looked down to see who was getting on. My eyes alighted on a drunken hulk of a man, in his fifties, wearing a black three-quarter-length coat. A full mop of white hair highlighted his rubicund face, which looked far too happy as he swaggered his way to the front of the queue.

Panic quickly set in. The quietness of my fellow passengers became deafening.

When he comes upstairs and sits next to you, and wants to start a big drunken conversation, every single passenger, while hiding behind their newspapers and smart phones, are all in for one hell of a show. They will sit there in amused silence thanking sweet Jesus or Buddha or the Dalai Lama or John Lennon — whomever they believe in — that the drunk is sitting next to someone else.

I got angry, not with my situation but with karma. What have I done to deserve this? All I’ve done today are nice things. I stood up for that pregnant lady on the Northern Line this morning, didn’t I?

The drunk boarded. “Where is my bastard Oyster Card!” boomed from downstairs, loud enough so that the whole bus could hear. “I'm sorry Sir. If you haven’t got the fare or can’t behave I will have to ask you to get off", replied the bus driver, equally audible. “Well alright, don’t get ya knickers in a twist...bloody women drivers.”

“Can you mind your language, please, there are children on this bus”, came the protest from an angry mother.

“Bloody women”, the drunk answered back, to be met by a very authoritative: “I think you better shut up now mate”, from a stern sounding man. The drunkard made no reply and, just seconds later, as if the whole altercation had never happened, or didn’t matter, he started singing at the top of his voice “You are the sunshine of my life”. It was then that I heard that first dreaded step at the foot of the stairs. “You are the apple in my eye...”

“You are an idiotic drunk” I wanted to reply, my fears suddenly quelled and replaced by anger, as I sensed that other people were now registering what was going to happen. The drunk is coming upstairs, there’s only one empty seat, and look at that pathetic helpless victim sitting on his own. He’s going to get it! The eyes of the top deck grew heavy on me.

I tried to think of ways I could get out of this mess. I could just engross myself in my phone. But a phone isn’t a newspaper, you cant make a tent out of it. I wish I’d brought my headphones. Maybe I could stretch out, to try and occupy both seats. No, that wouldn't put off a drunk. He'd just laugh and say something like “room for a little one there kiddo?”, and sit himself down anyway, and so amuse everyone who'd seen my feeble attempt at trying to occupy a twin seat.

He appeared, at the top of the stairs and stood there grinning while the glorious old neo-Georgian East Finchley Library whizzed past on the other side of the road, and then his voice boomed again as he performed more classic Stevie Wonder to his captive audience.

We had gained altitude, flying high now somewhere over the North Circular. This is when he first stared at me and my empty seat invitation. I was prepared. I kept a poker face. I was also resigned. “You’ll just have to ride this out."

Then — my heart went into my mouth — two teenage boys sitting right at the very front of the bus had made a move. “Please!” I thought, “do it!”. Miraculously, they started to get up. They were getting off the bus! I felt like punching the air. My chances of escape had now increased by 50%.

“No swearing downstairs lads”, quipped the drunk, throwing a cheeky grin to the boys as they passed him. This was actually quite funny and I noticed one or two raised smiles.

I inwardly screamed: “Go for it! Sit on the two empty seats at the front. You’ll like it there. You can pretend to be the bus driver”. He looked straight at me again, then he glanced at the empty twin seat at the front of the bus. He swayed as the bus started its descent down to the Finchley Lido complex and in an instant he had decided. He stepped forward, towards the front of the bus!

Please continue to send submissions to fiction@londonist.com. As well as general London stories, we're now looking for occasional tales set on, or in some way involving, London buses, as part of our celebrations of Year of the Bus. Entries (whether general or bus-themed) must be no more than 1,000 words, and must be set in London, or strongly inspired by the city. Full details here.