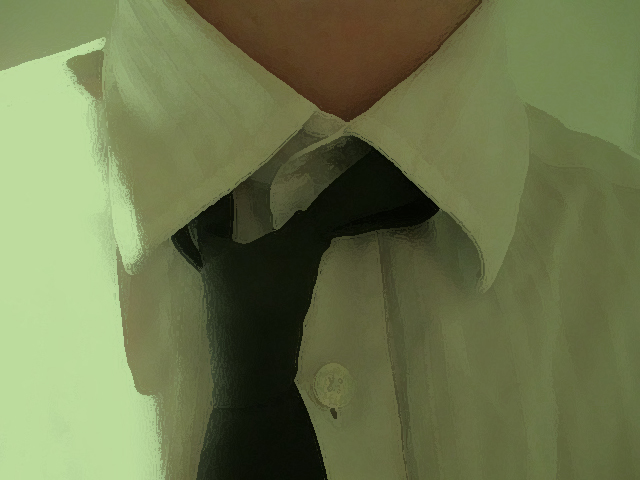 Continuing our series of short fiction set in, or influenced by London. This week, Melanie White's flash fiction piece considers a recently single guy at a bachelor party: as it turns out, the last place he ought to be.

A Free Man, by Melanie White

Music pumped through the club in pulses like hot blood. Richard loosened his narrow black tie, bought for Tom’s bachelor party. A “Reservoir Dogs” theme. He felt like an idiot, like a funeral directors’ convention had invaded the strip club. The women were lapping it up, though — silicone swirled in every direction. Tom cackled at the centre of their attention, waving a 20-pound note in his teeth like some kind of demented cash machine.

“Mr. Pink!” Tom bellowed at him. “Come on, Pinkie — stop sulking over that bitch and get one of these down you!”

Richard bared his teeth and knocked back a shot of some vile green substance. It mingled uneasily with the steak and whiskey already battling it out in his gut.

Two lurid purple triangles surrounded by an undulating expanse of tangerine suddenly obscured his vision. Richard peered upwards into what looked like two ink blots floating amid a cloud of blonde. A painted claw draped across his shoulder.

“How about a dance?” a voice dripped, thick as syrup.

“Go ooon!” Tom roared. The others glanced away briefly from the gyrations onstage, hooting encouragement.

The woman began to swivel in front of him, gripping the sides of his chair and whipping sticky strands of hair across his face. A saccharine, chemical odour washed over him. He held his breath.

Abruptly, the woman straightened up.

He swiped a pile of Tom’s novelty napkins from the table, printed to look like 20-pound notes.

“Here you go,” he said, trying to press the stack into the woman’s hand. “Worth every penny.”

She pursed her frosted lips and stared. Richard leaned over and tucked one of the napkins into the elastic band of her thong.

“Worth — every — penny,” he repeated, punctuating his verdict with a resounding slap on the arse.

While the table guffawed, Richard felt himself elevated somehow from behind and transported across the club. The room and its braying, heaving masses spun. He flailed to halt the motion, but his feet kept leaving the ground.

Then he was outside, in an alleyway. The clang of a metal door reverberated in his ears.

He staggered past the overflowing bins and slumped against the rough brick of the wall. He should try to get a cab home, but he felt depressed at the thought: home, quiet and cold and empty at 3 a.m.

He’d done everything right. When he and Shauna first started seeing each other, he’d picked up every bill. He hadn’t stinted on the fancy restaurants, either — not that that was much of a hardship. He liked a nice Burgundy and a Michelin star as much as the next man, especially with a hottie like Shauna on his arm. He felt proud to be seen with her; he could take her anywhere. It wasn’t just that other men were eyeing his prize; passing women cast him flirtatious, even hungry looks in a way they never did when he was by himself. Shauna was the bait that turned him into a catch: a big shiny fish they wanted to hook.

Yet he’d never cheated on her. In three years, he’d hardly ever wanted to. All her moodiness, her irritability — he just rode that stuff out until his lovely girl resurfaced and he could forget about the rest. She was the best sex he’d ever had.

He would have made life so easy for her: a mews house in Chelsea, holidays on the continent. He was three years older now than when he’d first caught sight of her, over a sea of client heads at his firm’s Christmas party. Now that she was gone, those were three years wasted.

A door swung open further down the alley and slammed against the wall. Richard jerked and hauled his drowning mind to the surface, a diver freeing himself from a tangle of weeds.

A woman clicked out the door and paused beneath the broken exit light, shrugging on a long coat. She lit a cigarette. Richard pushed off the wall and walked towards her, trying not to stumble. The woman watched him, smoking in long drags.

She looked at him silently, then pulled out a pack and held it open. Richard fumbled to slide out a cigarette.

“Have you a luminescence?” he asked, going for a jaunty tone.

She sighed and flicked a plastic lighter. The paper sizzled delicately as Richard inhaled. A warm wash of calm followed by a spiral of dizziness coursed through him. He leaned against the wall and closed his eyes.

A moment later, he realised the woman was talking to him.

“Are you looking for company?” she said.

She had a long black ponytail, thin and straight. Like a Tarantino tie, he thought. He felt a laugh surge, but choked it back. Mr. Pink wouldn’t laugh. He coughed. He felt odd and slightly hysterical.

He patted his jacket, failing to locate the familiar lump. He must have dropped his wallet somewhere in the club. Damn, he thought. Maybe one of the boys would see it and pick it up.

Something papery rustled in his trouser pocket. Perhaps he had enough cash for a hand-job. Why not, he thought. He could do what he liked. A free man.

He pulled the wad from his pocket, glancing at it. He looked back up at the woman and tried to smile, but his face felt stiff.

“Do you take napkins?” he asked.