London Short Fiction: The City Inside

By Londonist Last edited 96 months ago
Londonist London Short Fiction: The City Inside 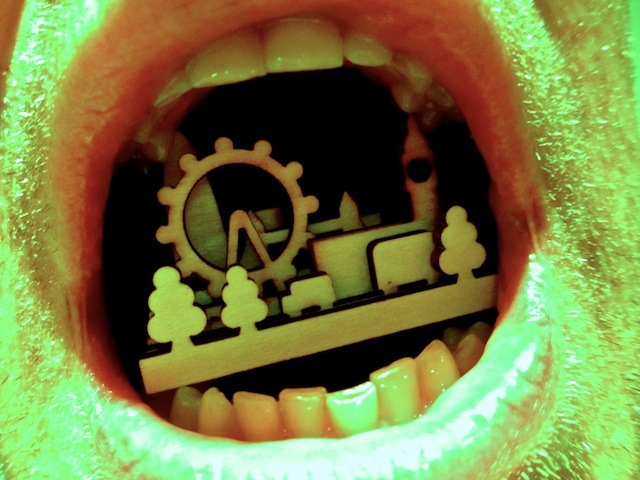 Continuing our series of short stories set in, or influenced by, London. Today, Tom Butler gets anatomical.

The consultant flexed her hands. “Let’s just say you have a very interesting architecture,” she said. “We didn’t pick it up at first. We just thought its complexity was at the upper end of standard digestive patterning.”

She passed me a glossy printout of what looked like a storm cloud: layers of grey and white blotches in a particularly thunderous sky.

“What are the implications?” I asked.

She gestured at the scan. “Well, almost certainly this complexity has caused the discomfort that you’ve felt over the last few months.”

“My stomach ache and the heartburn?” I ventured.

“Yes: loose stool, stomach cramps, trapped wind. All of the above, really.” She smiled.

“Well, it’s good news. I’ll refer you to a dietician who can put you on a very low resistance diet and monitor progress. It means lifestyle changes of course, but the results can be very effective and it will help over the longer term. How does that sound?” She was already rattling away on the keyboard, tabbing between green boxes on her screen.

“Good. Good.” She paused. “There is one other facet of your lower bowel that I’d like to discuss.” She clicked her mouse and the printer behind her whirred into action.

“I’m not normally allowed to use coloured ink.” She chuckled and span round on her chair to retrieve the printout.

She paused once more, holding the paper close to her chest.

“What I am about to say may seem perplexing. And I’m sure you’re likely to have a lot of questions. But really, there’s nothing to worry about. In many ways you’re very, well, just extraordinary.”

With a magician’s flourish, she turned over the piece of paper to reveal what appeared to be a Zone 1-5 Tube map.

My first support group was a fortnight later. I arrived late, hoping to slip in unnoticed, listen to the speaker and then leave without meeting anyone’s eye.

But my arrival had been anticipated, advertised even, and their heads turned towards me as I entered. Thankfully it wasn’t the John Merrick convention I had been expecting; you could have been forgiven for thinking this was a normal bunch of people.

“Here he is,” an older man with bloodshot eyes broke away form the group and offered me his hand. “Pleasure to meet you Pete, I’m Alex. Welcome to the club.” He pulled me into the group. “First thing’s first: drink?”

Some brief small talk preceded a presentation about their sister clubs in Russia: St Petersburg, Moscow, and Vladivostock. Evidently the medical establishment there was hostile to the very idea of epigenetics, and all evidence was suppressed. Illegal groupings had formed though, mainly for those with external symptoms; naturally, they were easier to identify without the use of medical instruments.

Alex came and found me after the talk, reminding me I owed him a pint.

Settled with drinks, I eventually let my curiosity get the better of me.

“You seem to know all about me, but what about you? Why are you here?”

“Yes, I get that you’re all very supportive. But I mean, what are your, er, symptoms?”

“We call them our ‘marks’, not our symptoms.” He looked disappointed.

Squeezing my shoulder with his spare hand, he said “you’re not sick Pete, you’ve been chosen. You’ve been marked by the city and set apart. Like Jane,” he tilted his head in the direction of a dark-haired lady in her 40s.

“Take a closer look at Jane’s legs and you’ll see the Bakerloo Line recreated to the very last station in her varicose veins.

“Emilie over there, her toes are exactly the same shape as the Thames Barrier. We’ve all seen them, they’re beautiful.”

He continued around the room, pointing out a man whose liver shared the outline of Victoria Park, and another with scoliosis that matched the curve of the Serpentine. One lady carried a folder with scans showing that her womb had the same cross-section as Bazelgette’s main sewer.

“Don’t you see? We’ve been chosen.” Alex’s eyes were wild.

“I’m not even from London.” I said, noticing for the first time that the capillaries that cut across Alex’s eyeballs meandered exactly like the Thames.

Needless to say, I never went back. I feigned support, gave out a false email address and phone number, and left them to it.

No doubt I’m missing the opportunity to be at the vanguard of a new genetics, to publicly boast of my chosen status, my special connection with my adopted city. Although who had adopted whom I can’t be sure.

The consultant was disappointed to learn I wouldn’t be going back to the group, although she said she would respect my desire for privacy.

“It’s such a waste of an important discovery,” she said. “You’re one of the more extraordinary examples of all of them, really.”

The group is due to go public in the next few months. I wonder what the reaction will be. For now at least, I’m quietly happy with my regular bowel movements. That, and a new sense of pride whenever I take the Circle Line.