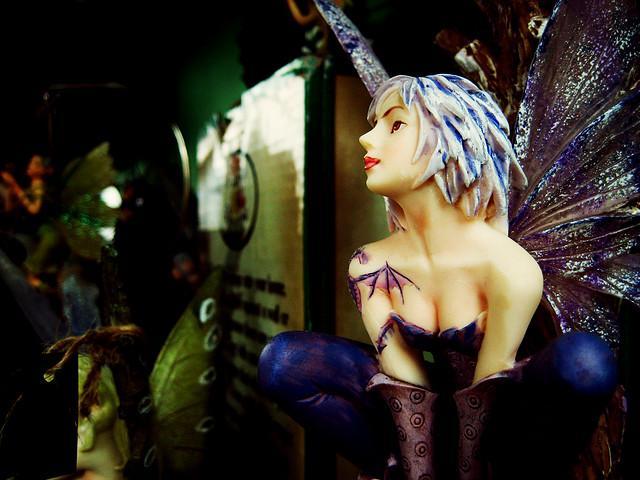 Alana pulled her coat around her and shivered. She really needed a new one; the long, faded velvet frock coat was starting to look shabby. They'd all admired it once, rubbing the plush, velvety fabric between their fingers as she'd twirled around. The best dressed fairy in London she'd been, whizzing around Chelsea depositing five pound notes like confetti from her suede clutch bag.

Those days were long gone.

She shifted around on the windowsill to look at her reflection and flinched. Her hair was lank and dirty, her skin dry and flaky. She reached for the dirty velvet pouch lying next to her and sighed at the state of her hands. Here she was, spending her evenings collecting fingernails when her own were in such a mess. The irony.

Not that she hadn't been warned. But her demotion had been so swift, she hadn't had time to think. One minute she'd been head of the whole Tooth Fairy department and the next? The next she'd been called in to see The Boss who'd heard rumours about a 'situation' and had been 'terribly disappointed' but hoped that she'd understand that this kind of thing 'must be seen to be dealt with' and here she was.

He'd talked his way out of it of course, with a flash of snug fitting emerald green slacks; typical leprechaun. She mentally shook herself. It was no good being distracted when you were sneaking into houses at 3am to steal fingernails.

She reached into her pocket, pulled out the small metal tool she used to open windows and slid it along the edge of the glass, carefully removing it. She listened. Nothing. She was especially careful now after that time with the little boy who'd sat up in bed, rubbing his eyes.

"Yeah, whatever, go back to sleep, kid." It had been a long night and the last thing she needed was some gummy kid getting excited.

He'd pulled out a piece of tissue from under his pillow, unwrapping it to reveal a blood-streaked tooth.

She'd stepped back in horror. "Oh gross, put it away! Not my department I'm afraid."

He looked her up and down.

"Gosh no, you can't miss her, all pink sequins and hair extensions, with boobs you can see from space."

She'd left him thinking about this as she searched the flat, looking in all the usual places; the bathroom bin, the side of the bed and, increasingly nowadays, the computer keyboard. Humans seemed to spend a lot of time sat at these things chewing their nails. It could be a bank balance, a difficult email, an illicit web chat, you never knew.

She'd gone back upstairs to find that the Tooth Fairy had arrived, all smiles and fluff, everybody's favourite fairy. No searching through bins for her; in and out in five minutes leaving behind a waft of perfume and glitter.

This time all was quiet so she set to work. Was this what her life had become? She'd had plans, ambition. She looked down at the pile of yellow, brittle toe nails in her hand and sighed.

She was just about to open the bathroom door when she heard a very faint retching noise from inside. She froze. It was against the rules to actively seek interaction with Humans and it was nearly the end of her shift. But it didn't feel right to leave someone who was obviously distressed.

She opened the door. There, draped dramatically over the toilet, wings drooping, glittery mascara smeared across her cheeks, was the tooth fairy.

"Well, well, well!" Alana walked over and slapped the other fairy on the back. "Big night, eh? Come on, you'll be fine, happens to the best of us."

The Tooth Fairy retched again, then sobbed, wiping glittery snot across the back of her hand.

"OK. I'm very happy for you. But as much as I'd love to hang around and share this magical moment with you, we need to get out of here."

She grabbed her under her wings and pulled her to her feet.

"No," said the Tooth Fairy, shaking her head, "you don't understand, it's not a fairy, it's a..." She glanced over at the door. "... a Human. He caught me, a couple of months back. We got talking. Things happened. He liked the thing I do with my wings and the fairy oil."

The two fairies looked at each other awkwardly, neither knowing what to say.

"This is bloody fantastic!" Alana said finally, "You gave me such a hard time after my leprechaun situation and all this time you've been shaking your wings at Humans. Dirty girl." She whistled softly. "Oh you couldn't make this up. The boss will be livid."

She saw the stricken look on the other fairy's face and sighed.

"Come on," she said, gently pushing her towards the window, "let's get you home."

They set off slowly over the rooftops, then followed the curve of the river until they reached Fairy Headquarters under Blackfriars bridge. They deposited the night's takings with the duty fairy.

"It'll be fine,” said Alana. “Although I can't promise you wont end up on the fingernail rota with me, your reputation in tatters and a slight whiff of cheese about you."

The Tooth Fairy managed a small smile as she knocked on the boss' door. Alana sat patiently outside and was just nodding off when the tooth fairy reappeared. Alana raised her eyebrows.

The tooth fairy shrugged and looked at her feet.

“Grim,” she said, suddenly feeling grateful for the toenails.

She took the other fairy's hand.

“Come on.” she said, smiling, “I'll buy you a drink while you tell me all about the fairy oil thing.”