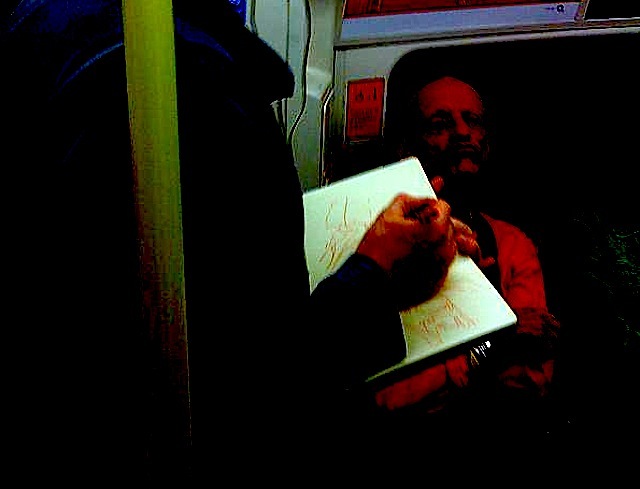 Continuing our series of short fiction set in, or influenced by London. This week, Stuart Snelson conjures a mysterious Circle Line artist.

He wintered on the Circle Line.

Whilst summer found him in the parks, as the chill crept in he burrowed underground. He turned his back on his tattered fraternity, graveyard guzzlers sucking life from cans. From nothing he fumbled a structure.

Each morning’s begrudged shuffle saw him scuffled aboard with other commuters. As the tube dispensed passengers, he remained in his seat; to his travels, there was no urgency. Although the Circle Line no longer offered strict circuits, he could sit rooted all day long. In the evenings he witnessed many of the morning’s passengers reconnect, travel the requisite arc to the arm of the network that would ferry them home.

There was a purpose to his imperfect circuits. Scribbling diligently, he sketched fellow passengers; his cracked leather suitcase, tipped towards him, doubled as an easel. In disparate inks, in smudged pencil he captured commuters. His earliest efforts betrayed the track’s glitches, cardiographic twitches forming etch-a-sketch semblances. Over time he became accustomed to the track’s vibrations, his hand steadying to the rhythms of the train. Rush hour portraits were slithers of faces glimpsed through the gaps between straphangers. Such images were at the whim of his unwitting sitters. Short haul travellers, changing trains, or tourists who had scurried underground to ride two stops, meant he did not have time to catch a full likeness, faces stalled mid-study. They would not be completed. He refused to draw what was not there.

He proved an invisible scribbler. Wilfully ignoring his presence, sitters were oblivious to his furtive assessments. He drew secretively, one dirty hand concealing the work of the other, souls stolen stealthily. His blooded, hooded eyes turned on whoever sat closest. Occasionally he would find himself the subject of a snatched photograph, an image he would never see, an Instagrammed tramp adrift in cyberspace, clandestine photographers little realising that he was simultaneously capturing them.

Art supplies came from unconventional sources, his portraits drawn on the back of leaflets. Betting shop pencils were worn to nubs as he captured his likenesses; liberated catalogue shop pens, freed from the dull inscription of numbers, gave shape to faces.

He paused only to eat lunch, potluck picnics salvaged from whatever passengers left behind.

Eventually he drew his last. He died mid-sketch, slumped upon his final portrait. He completed twelve circuits before someone intervened, cautiously nudging him hoping he was asleep.

The officer assigned to identify him hit, repeatedly, brick walls. The man carried no means of identity: his filthy pockets offered up no oyster card, his travels went unmonitored. Doubtless he slipped through a zone without barriers. The scant cash he scrabbled together would not be wasted on tube fares. His fingerprints yielded no return. He had not troubled the prison services, at least in this country. His nationality was uncertain. As doors opened to deja-vu announcements had he understood a word? Distinguishing features were sadly lacking, no eureka scars or breakthrough tattoos. The consultation of dental records would prove, through toothlessness, fruitless; a well-worn false set filled the void, gave definition to his grizzled jaw. He imagined dentures rinsed publicly in the sinks.

During questioning, the tube’s driver had muttered darkly that it made a pleasant change to have someone die on his train rather than under it.

The man’s flaking case revealed hundreds of portraits, stacked in elastic bands, a battered gallery forever in transit. They seemed downcast souls. In nearly all the portraits eyes were averted. Did he ever revisit them? He imagined a home filled with similar images, a hovel hung with character studies.

Industrious, he thumbed through the bundled portraits, essentially to see if they revealed anything helpful, but also in search of his own image. On his own partial circuits into work, he had often seen the bedraggled figure of the deceased. He wondered whether he had ever been close enough to enter his frame. Had his face been committed to paper? He found neither himself nor any useful clue.

Consulting CCTV footage, they rewound him to his station of embarkation: Finsbury Park. They watched him shuffle backwards into shadows, the peripheries, areas not deemed worthy of monitoring.

Resurrecting him from memory, he pictured him huddled between hostile commuters. People had no choice but to sit close. Was this the only human contact he had? Elsewhere, he imagined, he would be afforded as much space as he needed.

Unsurprisingly, no next of kin emerged. Having died of natural causes, he would await his humbling comeuppance: incineration into whichever, if any, hereafter awaited him. This was not an uncommon occurrence. As the coroner explained, thousands still endured pauper’s funerals, the unknown or destitute dealt one final ignominious blow. His thoughts turned naturally to loved ones. He felt queasy at the thought of them being lowered into unmarked graves, cremated without witnesses.

Regarding the man’s sketches, it seemed such a waste for them to moulder in their case. Colleagues were dismissive of his interest. Why would anyone wish to save the drawings of a homeless man? If he didn’t act he knew that they would be destroyed. Donating them to a museum he imagined them archived, removed from public view, a festering bequest. He wanted people to be able to see the work.

Surreptitiously, he set about liberating them. From his spoils, he selected a few to frame upon his wall.

He considered staging an exhibition but lacked the requisite contacts. Ideally, he would convert an entire carriage on a Circle Line train, a touring exhibition in the unknown artist’s honour. Given the desperate overcrowding already in evidence this seemed an unlikely outcome.

With the aid of blu-tack, he became a guerrilla curator, released them back into the wild. As tube carriages quietened, he stuck images above the seats, oversaw a retrospective in instalments. He hoped that one day a commuter, lost in bleak reverie would be snapped back to life, distracted by their mysterious likeness.

Copyright, Stuart Snelson, 2013. Stuart's stories have appeared previously in Litro, 3:AM and Popshot and are forthcoming in Ambit, Far Off Places and the Soul Bay Press anthology Thirteen. Image by M@.