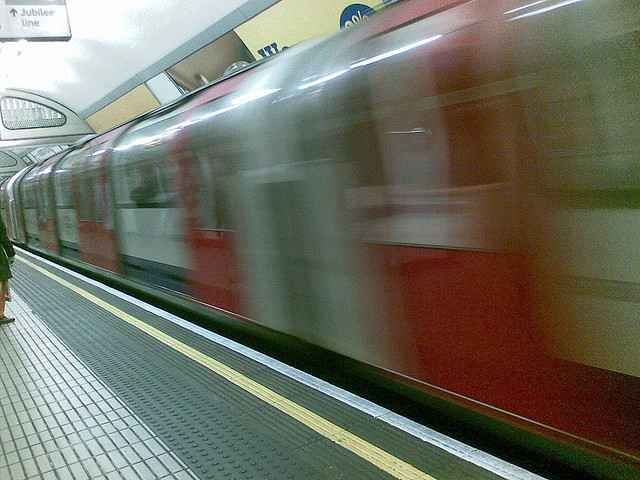 Continuing our series of short fiction set in, or influenced by London. This week, Jenny Mackenzie evokes ambivalent early dating in London.

Jazz Code And The Tube

Yesterday, I was sitting on the tube at about 6pm. A man sat next to me and lightly jogged my elbow, so I automatically glanced up at him. The carriage was packed and everyone was observing the tacit London public transport etiquette of ‘eyes down, reading a Kindle, hiding behind the Evening Standard or playing Candy Crush on their phones’.

The man spoke in a low voice, so the rush hour torpor was not disturbed “We’ve met before” he said.

“I don’t think so” I retorted. Usually I would have ignored him, got up and disappeared into the crowd of bodies.

However, he was well dressed, polite and looked vaguely familiar. Perhaps I did know him?

“How do you know I like jazz?” I answered, trying to be frosty, but my interest was piqued.

“I can tell a lot about someone by the tube line and time of day. If you’re on the Central line, heading into the city in early evening, there’s a good chance you like London culture.”

After a pause, I replied “Sorry, I’m going to the osteopath actually.” He smiled as I stood up and alighted at Lancaster Gate.

“See you again,” he said, looking down to his phone.

As I sat in the clinic waiting room, five minutes later, idly checking my Facebook notifications, I saw a friend request from someone called Miles D. I looked at the profile photo — it was the guy from the tube.

Despite my better judgement, and before I could process the rational reasons to ignore the request, I pressed accept. Within five seconds, a message appeared: “I’m going to Ronnie Scott’s. If you can make it, great. If not, will be at the Half Moon Putney tomorrow night?”

Clever, I thought. Playing it cool but sending a clear invitation. Miles sounded like a man who knew his own mind, not a flake. Girls like that.

The next day I had a growing sense of nervous excitement and trepidation. Should I go to the Half Moon? Should I go alone? Should I go with my burly brother and some of his rugby playing pals – to show I was up for spontaneous fun, but had back up?

Normally, I would never just head out and meet a random from the tube, but Miles felt familiar, safe and exciting all at the same time.

Plus, it had been quite a while since I’d liked anyone, or even been on a date, other than mates fix-ups or the dreaded, drunken, miserable ex-sex.

After a day pacing about, I rustled up a reluctant, non-jazz-loving girlfriend and set out to Putney.

“Who is this guy anyway?” asked my friend Sam as we walked from the tube, in the rain.

“I’ve no idea,” I answered. “He asked me on Facebook to come along tonight,” I tailed off, a bit embarrassed.

“Huh, sounds lame to me,” she moaned. “You don’t even like jazz much anyway.”

“Yes I do,” I replied huffily. “I had Weather Report permanently on the stereo in my bedroom, in my teens.”

“Well you should have checked the weather report tonight,” she shot back, “and brought an umbrella.”

We entered the pub. Through the old, heavy swing door, we went from rain and cold into a welcoming, fuggy gloom, filled with bodies and the beat of a jazz band. I looked around for Miles. It would be impossible to see him in the dark, so we got some drinks from the bar and pushed our way onto a couple of random stools.

After making small talk with Sam for a while, I started to think that if Miles had been expecting me, he would have searched the bar by now and found me.

“We’ll give it another twenty minutes then head off,” I said to Sam.

“Yep,” she assented, looking bored. No-one had come to chat her up so she was ready to go.

I hadn’t been paying much attention to the band, but as we finished up our drinks, I glanced at the stage and I saw that the sax player sitting there, wearing a flat cap, eyes down, engrossed in his music, was Miles D.

A weird pang shot through me. So, was I just an audience member being rustled up? Did he really like me? How did he find me on Facebook in the first place? Then, irrationally, I felt annoyed. It felt like I was just a punter.

We trundled home on the tube in bored silence.

“Nice to see you hon,” Sam said as she stood up. “See you next week. Let’s go to that new wine bar in Hackney Road. Please don’t ask me to go to any more hairy jazz gigs.”

After Sam clomped off into the night at Bayswater, I looked down at my phone, trawling through the newsletters before checking Facebook notifications. Miles? I couldn’t stop myself thinking, despite my annoyance.