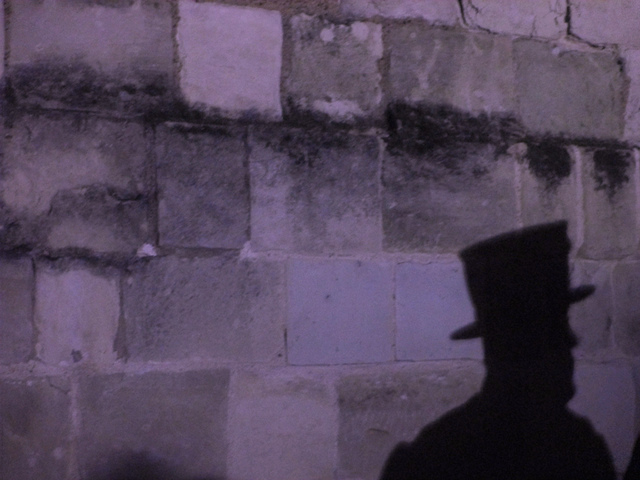 Our short fiction series continues. This current special theme is London Razed, visions of the city’s destruction in the past, present or future. This week, Glen Delaney retreats inside London's oldest fortress.

“This is delicious, where’d ya get it? It came in with you?” Brian bit into the wing, flensing flesh from bone with quick, economic movements. “Didn’t think we had any chickens left.”

“Yeah?” Brian set down the wing and licked the juices from his fingers with quick slurps. He revelled in the taste, it’d been months since he’d had anything but stale emergency rations.

Eric began to open his mouth but was interrupted by a booming sound. The room shook and dust fell from the ceiling in a great cloud, Brian leant forward to shelter his meal. The lights flickered briefly as the light bulb struggled to cope with the violence. It was a missile or bomb or RPG or whatever the hell they had been reduced to using now. Might have been one of theirs, or it might have been the enemy’s, there wasn’t much way you could tell. Eric wasn’t taking it too well. Poor lad had probably seen the damage they could do up close and personal before he’d found his way to the Tower.

“Don’t worry.” Brian smacked the wall. “Solid rock, built about a millennium ago. There’s nothing getting through that.” He let his hand linger on the stone, some of the men here had a devotion bordering on reverence for the sturdy fortification.

The lad was still pale, he couldn’t have been more than eighteen and still twitchy after being found on the streets. There were still civilians who survived out there, in the battered tube tunnels and the sewers. Fewer were found alive every year.

“So why are you sharing this with me?” Brian asked sceptically. He’d heard about this one, buzzing around, sticking his nose into things he didn’t need to know.

Eric shrugged carelessly. “They tell me you’ve been here a while. Since before the war.”

Brian nodded, so that was his game. There were always those who wanted to hear about the old days, everyone loved to imagine somewhere that wasn’t here. He picked up the wing. It’d been too long and he’d rushed into this, best to savour it slowly. He began to eat again, delicately stripping the bone one flavourful mouthful at a time. Eric let him enjoy it for a while, everyone left could appreciate the reverie for good food.

He washed his penultimate mouthful down with an earthenware jug filled with the crap they’d been pumping up from the cellar. It tasted like it’d come direct from the latrines but it was the only safe water now that the very rain had been poisoned. “I was a Yeoman Warder, started here when I was about forty but I’ve been in the forces since I was a lad your age.” He’d been eighteen when he’d enlisted and he’d never thought he’d look back and call himself a lad. Shiny as a brass button he’d been, all spit and polish. “They called us Beefeaters in those days. God, wish I could have a steak right now. You’ve probably never heard of steak have you?” He didn’t wait for an answer. “We were the guards here at the tower, protecting the Queen’s jewels. King’s jewels now.” He amended. “If we still have one.”

Eric’s eyebrows rose. “Jewels?” He said, trying to conceal the avaricious glint in his eye.

Brian smirked. “Evacuated long ago, don’t worry about that.”

There was another explosion and the room trembled more violently. That was the worst one he’d felt yet. Even Brian had to set both hands on the table. The light dimmed briefly then blessedly surged back. The damn bombs were getting louder every day.

“Are they getting closer?” Asked Eric. He was shivering, the poor thing.

“Ravens?” Eric’s eyebrows drew together in a frown.

“Yeah, you know. Birds, big and black. Like a chicken. You know, birds?”

Eric shrugged uneasily. “I know pigeons and I know chickens. Nothing else left out there.”

Brian shook his head, had they been reduced to this? This kid probably couldn’t remember a time before the war, before the long winter, before biological warfare in the tube, and the battle of Clapham.

“Big bloody things and not too friendly, especially not after being cooped up for so long. I’ve got two stowed away around here, safe and sound. It was part of our duty as a Yeoman. I am the last Ravenmaster.” He laughed at that, it sounded so grandiose and yet so pathetic. “My job’s to keep the ravens alive. If there are no ravens in the Tower it falls and if the Tower falls...”

He kept them deep in the bowels of the Tower, far away from prying eyes. He headed down there every morning with any dead he could scavenge from the last night’s casualties. It was a sickening task and he hated doing it. They’d await him with beady eyes and those horrible black tongues and their insatiable lust for human flesh. It had to be done though, that at least had been drilled into him over the years. The ravens had to live so that London could live.

“The ravens…” Eric’s fingers gripped the table tightly but his hands sill trembled.

“Yeah?” Brian toyed with the bone debating whether to finish it now or save the last shreds of meat for later.

“The ravens…” Eric swallowed painfully. He was looking down, his face was white as a sheet, his mouth open. Brian followed his eyes down to the wing, to the last bite of greasy flesh. That delicious, succulent flesh. Screw it, he picked up the bone and tore off the last bite.

Eric watched with wide eyes. “The ravens… They’re not kept in cages in the subbasement?”

Brian felt his mouth drop and the meat slide slickly off his tongue.

The room shook again as outside another bomb exploded and then the lights flickered off.