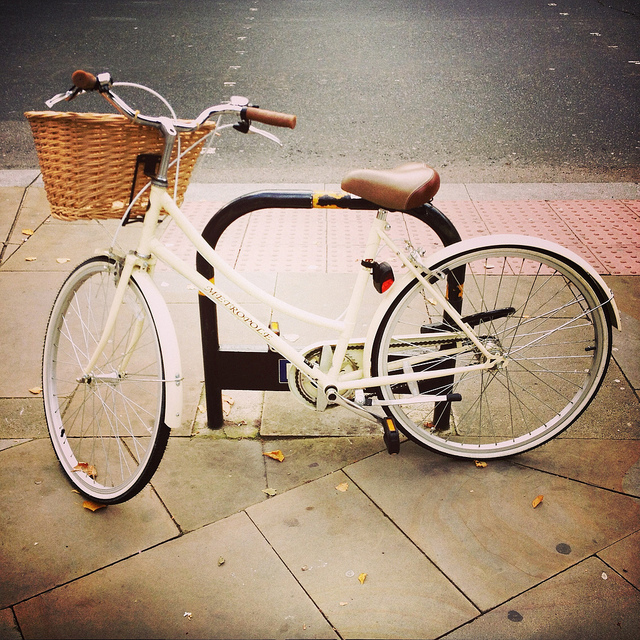 Continuing our series of short fiction set in, or influenced by London. This week, Ryan Cartwright is involved in a traffic accident where all is not what it seems.

The sun blinded her temporarily as she sat down on the kerb. Was that how it had happened? Did the same sun, reflected off the same window obscure her from the driver? She could see him in the middle of the road, fussing over the front of the bus and shouting about how he hadn't seen her. Hadn't seen her? Hadn't looked more like. She winced as the pain in her leg spread like warmth through her torso into her head. As far as she could see there were no cuts, no blood. Certainly there appeared to be nothing broken but the pain reminded her that the absence of obvious signs of damage might be worse news than she had thought. The driver was becoming visibly upset and a few people tried to calm him. Her bike was crushed, mangled, wrecked. It looked more like some piece of eclectic, contemporary art than a bicycle.

The passengers were let off the bus and divided themselves between those who just couldn't be late for work and those joining the crowd of gawkers getting their phones out. She heard mutterings from the crowd. "Well, that's what you get for not wearing a helmet.", "Did she jump the lights? They do it all the time you know." She wanted to scream at them! Her helmet was clearly on her head for all to see! Not that it would have made much difference judging by the state of her bike. As for jumping the lights, she had done her share: when you justify to yourself that you wouldn't have been able to stop in time or the thought of using all that energy starting off again convinced your aching legs to keep pumping, but not this time. This time the lights were green. She had come from the same direction as the bus. Couldn't they see that? It was clear that the bus had turned too tight and tried to occupy her piece of road before she had vacated it.

Her whole body ached as she tried to stand again. It was surprisingly easy to stand. It felt more like she'd slept bad than been involved in the carnage she saw before her. She looked up Lombard Street behind her, the gold painted signs hanging over the doors glinted at her. The sun, had it been the sun? No it couldn't have been! The sun was behind her now. It would have been behind her as she turned. It would have been behind the bus driver. She was, to be honest, a little put out that nobody had come to check on her. Most people were either standing over the remains of her bike or had started to drift away from Bank junction. All those little squirrels running off to tend to their particular pile of acorns. She looked across at the statue of Wellington, sitting proudly on his horse. She had passed him several times but never really looked at him. She noticed he had no saddle, no stirrups. Was that meant to say something or did he usually ride like that? Meh who cares.

Her attention was caught by the arrival of the ambulance. The paramedics jumped out and ran to the scene. Ran not walked. Had they not been told she was reasonably okay, that there was no need to hurry? They whisked past her so fast she barely felt the breeze. She called out but her voice came out weak. They carried on running. Why did nobody care about her? Surely they could see from the state of the bike that she would be hurt, seriously hurt. Seriously. Except she wasn't that hurt. She should have been but she wasn't. Anyone riding that bicycle would have been really, really hurt. Maybe even? She didn't want to think about it.

Like most dawns this one came slowly. She began to see the things she had missed: the legs sticking out from beneath the bus, the slick of the blood on the tarmac, the paramedic shaking her head as she failed to find a pulse. She stood and started to walk to the bus. Further details began to jump out at her. The accident was replayed in her mind's eye as she got closer. The lorry turning, the sun glinting, the green traffic lights. The brief pain and then the silence as she no longer heard the voices of those trying to save her. Lorry, not bus? The vehicle in front of her was clearly a bus yet the playback in her mind contained a lorry. The locaton was the same but the bike was different. In her memories it was white, with a basket, this one was blue with Shimano gears. Yet the two scenes were so similar? Then she saw the head, under the bus. The hair was blonde, not black like hers. The hair, she could see the hair! There was no helmet on that head, yet she still wore hers. The t-shirt was wrong too and although they were partially obscured by the tyre, she could see the shorts were not like the ones she was wearing. This was not her.

So did that mean she was wasn't really..? She turned and looked around. Nobody noticed her — saw her. She shouted. Nobody flinched. It was not her under the bus but the accident was so close to her own moment that it had made her think it was her. Suddenly she remembered. She remembered why she was there, why she had been at three other cyclist fatalities this year. She started to look around and then she saw her: the woman leaning against the railings over by the Tube steps. She recognised the ashen look, the confusion, the panic. She checked back at the bus. Same shirt, same trainers, same hair. She strolled over and nudged the woman's elbow. "Hi," she said calmly, "I think you'd better sit down. We have a lot to talk about."

We’re taking a break from our themed stories for a couple of weeks. In the meantime, we’re still after your general submissions, which you should send to fiction@londonist.com. Entries must be no more than 1,000 words, and must be set in London, or strongly inspired by the city. Full details here.