Continuing our series of short fiction set in, or influenced by London. This time, Michelle Surtees-Myers is waiting for a night bus. 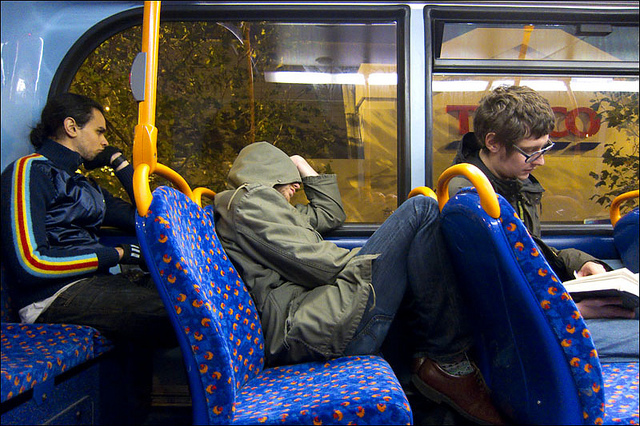 Pamela huddled under the bus shelter waiting for the number 47 night bus. She’d already miserably christened it the bus that never comes. The streets of London were silent, deserted, as if the city had been evacuated at the midnight tolls, which were still ringing, with only few ragged souls remaining. Pools of misty yellow light cast an ethereal glow into dark corners and forgotten kinks in the road, illuminating late night stragglers in long coats with turned up collars, leaning into corners, smoking wet cigarettes.

It was pouring with the kind of rain that can only fall out of the sky at midnight: unrelenting, icy needles, forming runlets of water, which snaked down empty streets looking for feet to lick and shoes to curl up in. She could feel the freezing wet of the pavement seeping through the toes of her shoes and her dripping hair was patched to the sides of her face. She was glad that she couldn’t see her reflection. Her new party dress, so pretty when she’d put it on this morning, was damp under her too-thin coat and her stockings were laddered. She was sure that her eyeliner was running down her cheeks and her lipstick was smudged. She shivered. Were those tears on her face or drops of rain leaking through the roof?

Why, why did she do this? She berated herself for what felt like the millionth time. But she had to go out, mingle and meet people. That’s what single people in London did, and in the run up to Christmas it was even more important because, by god, you didn’t want to be alone. Force-fed an endless barrage of images of sparkling, happy couples and families in Christmas jumpers, drinking glasses of homemade mulled wine and eggnog. It was enough to drive you to the brink. You had to be happy at Christmas, even if your smile didn’t quite reach your eyes.

So, indulging in the spirit, you’d end up in some crowded pub again and again, shouting words over too-loud music, imitating having a good time. Glass after glass of good cheer and forced laughter. Then home, a few hours sleep, shower, dress, and return to work; making it through the day only to do it all over again.

Now here she was, standing at a cold, wet bus stop under a dirty yellow light, alone, again. Water splashed against her legs as the rain pelted the pavement behind her, puddles rippling her watery reflection, blurred through unfallen tears.

A young girl from a small town up north dreams of making her way in a city of millions and finding true love. Sounds like Christmas. Someone to love, gifts under the tree, fire chomping at the grate. Well, such dreams were long buried and forgotten after too many disappointments under too many glasses of wine. He’d have dark hair, a lopsided grin, and a way of looking at her that was just for her. What would she give for just one ounce of the magic and a glimmer of that dream? A piece of her soul? Probably. She closed her eyes and wished.

She opened her eyes at a sudden hiss of rising steam. The bus, at last! The doors swung open to reveal a cheerful driver, doffing his cap. “All aboard. Destination Christmas. C’mon love, you’ll catch your death out there.” She clambered in and sank gratefully into the first seat, wet steam rising off her coat. The bus was empty, except for a few silent shadows at the back, hooded heads asleep. The driver’s reflection grinned back at her from the rear-view mirror, revealing a set of crooked teeth. “So love, where to this fine evening?” She smiled wanly and shook some of the water out of her hair. “Just home, please”. “Home”, twinkled the driver. “That’s all about the heart, isn’t it?” She hoped that he wasn’t one of those cheerful drivers who chatted all the way, but thankfully his gaze fixed ahead, intent on his route. She half closed her eyes and through the dripping corners of her foggy window, watched London reel by like an old film, wet and tinselled around the edges. Slow, slow, quick, quick, slow.

As the warmth of the bus seeped into her bones, Pamela’s mind drifted to how much she’d loved London at night. She hadn’t felt sad walking across Waterloo Bridge after dark, looking out across the river, taking in the glitter of the South Bank, or meandering under the twinkling lights of Covent Garden. At night, in December, London hid all sorrow behind its glorious facade. The river dazzled reflections of golds, reds and greens, and architectural wonders like St Paul's and the Shard lit up in the distance. You could simply feel the magic. London was gift wrapped, the Thames its shiny bow.

A cheerful voice startled her from her reverie. “Right, this is your stop. Hop off.” The driver doffed his cap to her as she stepped off. Pamela was momentarily disoriented. This couldn’t be her stop; she was right back where she started! Had she been asleep, gone all the way around and back again? She looked at her watch. Two minutes past midnight. Confused, she turned back, but the bus was gone.

Slowly, she realised that it had stopped raining. A crescent moon lit the sky, framed by a sugar sprinkling of stars. For the first time, she noticed a man just appeared, leaning up against the far corner of the bus shelter, coat collar turned up against the cold, dark hair plastered to his face. He looked over at her and smiled a lopsided smile. Two minutes earlier she’d have missed him.

The night bus trundled on, carrying no other passengers but the shadows at the back, hooded heads asleep.

Copyright, Michelle Surtees-Myers, 2014. Image by World of Tim, via the Londonist Flickr pool.

That's it for our Christmas fiction this year. Do continue to send your general London short stories to fiction@londonist.com. We'll be publishing these again early next year. Entries must be no more than 1,000 words, and must be set in London, or strongly inspired by the city. Full details here.