Continuing our series of short fiction set in, or influenced by London. This week’s story is by eight-year-old Spike Poyton. 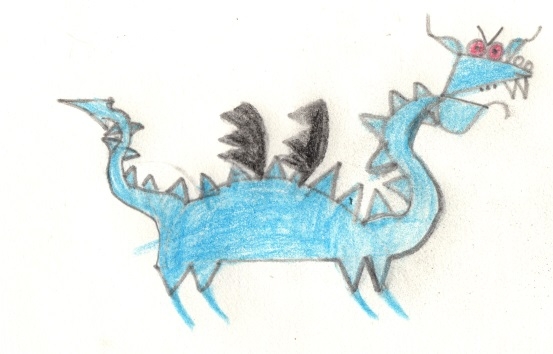 One normal day in London, a large scaly blue Dragon came out of the River Thames and walked about the city centre. The Londoners were terrified, as the Dragon said "Ah...Ah...Ah…” and sent a fireball out of his mouth, setting fire to the trees in Hyde Park.

The police tried to chase the Dragon but he said, “Ah…Ah…Ah…” and set fire to their cars.

The Dragon walked on and again said, “Ah…Ah…Ah…” and the London Eye went up in flames.

The firemen were really busy putting out all the fires, so The Mayor came to politely ask the Dragon to stop. The Dragon looked at the Mayor and said, “Ah…Ah…Ah…” and the Mayor got on his bicycle and cycled off before he was toasted.

Then a little boy said, “Listen! I think the poor Dragon has a cough.”

Everyone listened as The Dragon said, “Ah…Ah…Ah… Tishu!” and set fire to Tower Bridge.

The Vet from London Zoo came and gave The Dragon some medicine.

The Dragon went, “Ah…Ah…Ah…Thank You!” and no flames came out of his mouth.

The Dragon was very happy to be cured of his cough, and gave all his gold and treasure to the city to repair everything.

The Queen of England was very happy and built The Dragon his own cave in The Tower of London so he could live there happily ever after, guarding the Crown Jewels.