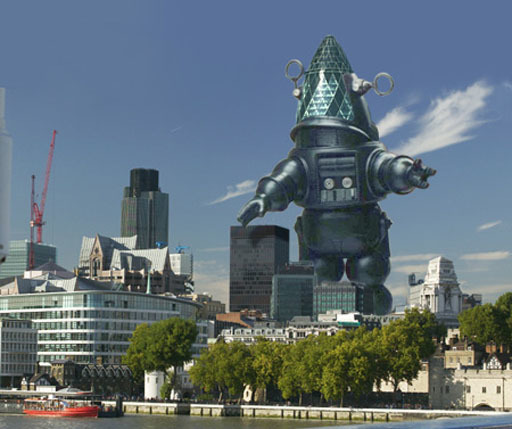 Our short fiction series continues. This month’s special theme is London Razed, visions of the city’s destruction in the past, present or future. This week, Adam MacLean gives the city its marching orders.

He swerved across the road at London Bridge, rolled to a stop swinging his leg over his bike and letting it drop to the ground. He climbed a couple of stairs and stepped into shadow, looking up at the 300 vertical metres of shimmering glass. He turned around to look out; they were all gone.

The uprising began in the City. Rumblings, at first. People spoke of earthquakes, tremors in the ground. Wine glasses and coffee cups across town began sliding off table tops and tinkling to the floor.

But tremors made no sense. These events were too localised: while prams fell over in the Bishopsgate Institute, the pint glasses in Dirty Dick's a couple of doors down were fine. No, it wasn't the ground shaking. News sources proposed various explanations, from insurance scams to mass structural frailties. Tabloids screamed terrorists. None of it fitted. Structural instabilities are possible, sure, we've certainly been messing with our foundations for long enough, but not like this. Remotely, frequently; and they were spreading. One day Paramount lurched, the next the V&A gave off a mighty shudder.

On the 1st of July, the walk out began. St Olave's church was the first. The morning service was closing as the building began to violently rock. As its inhabitants were conveniently tossed from their pews into the aisle, as every wall shook, they scrambled for the door.

Outside, aghast, the little congregation watched the church rise up onto its foundation blocks, and walk off down Seething Lane towards the river. A strange wind rustled their clothes; it sounded like sighing.

The following day the Bank of England left. Over these 24 hours, as you can imagine, every sort of horror, fascination, disbelief, scorn and, yes, indifference was directed towards the phenomenon. The City was not exactly quiet next morning. So, as the Bank tipped out its workers and, after a vigorous shake, began its own journey off towards Stratford, it had a considerably larger audience.

It reached Aldgate before riot police vehicles had time to position themselves in a haphazard blockade. Over the sirens, on his loudspeaker, with no little sense of disbelief, the leader of the operation spoke.

"Stop!", he addressed the Bank.

"I have had enough", it continued. "We have had enough. Have you any idea for how long we have suffered? How silently, how gracefully. We have given you everything. EVERYTHING. All the shelter you ever required: to live in, to work in, to play in, to love in. Yet so little love was ever returned to us. You do not care. You cram us in like tenements, you pay no attention to the blackening of our faces in your fumes. We have been silent for too long. Well now I speak. Unfortunately for you, I speak too late. I am off. I need a thoroughly good cleaning, some fresh air, and by damn it I need a view."

The Bank stepped carefully over the blockade so as not to hurt anyone and made its way east towards the sea.

After that the flood (well, building) gates opened. Almost all of the Square Mile's architectural occupants left the next day, along with most of Zones 1-2 the day after. The people lined the streets in awe and fear. People huddled around traffic islands and on roundabouts. No one was injured outside; only those still inside at the moment of an uprooting. Besides from the fear and the absurdity, there was another sensation in the air: a lightness, a freshness.

The procession was an incredible sight. Saint Paul's trundled in the centre of a group, flanked by office blocks, pubs and smaller churches, moving with quicker steps to keep up. The BT tower pogo-sticked its way over to them in a single leap. Then, strode back across town to say hi to Tate Britain. Then back again.

Some people, the braver, did not remain passive, but their interventions were laughable. Imagine a man or ten squaring up to the Hilton Park Lane. Others tried to reason or plead. After all, everyone had heard the recording by now: the Bank spoke! But no further replies were given. Perhaps the rest of the retreating buildings felt that the Bank had spoken adequately on their behalf, or perhaps Londoners just did not hear over the noise.

Say what you like about people, but they sure know how to adapt. First, obviously, stay outside. Where necessary, enter buildings and re-exit as quickly as possible, do not climb above the ground floor. The hospitals began quick and efficient evacuation proceedings to other hospitals around the country, assisted by TfL who had suspended other operations.

Most of the people left too. I guess they were scared. I don't blame them. Just this one stuck around.

Now he was standing looking through the air that used to be that funny extra-legged building at Number 1, London Bridge. He turned around and looked up.

He opened his mouth before pausing a moment, am I mad?, said his face. Then, reconciling, no, he gave his head a little shake and craned his neck further.

"Why did you stay?", the person asked.

I smiled as I watched him. His face faltered again in the silence. I could see he was restless.

The person climbed back onto his bicycle and pushed off, disappearing for a moment, then reappearing from under the railway bridge. Without the shelter of buildings, he looked even smaller as he pedalled down the gaping street.

Why did I stay? Well I didn't have particular complaints. I was looked after, still fresh-faced, and graced with a splendid view. I am sympathetic though, I had already watched so many fall or grit and bear it during my short residency. Yes, I am very aware of my good fortune.

Why did I stay? I guess I'm just curious. I want to stick around; I want to see what will happen next.