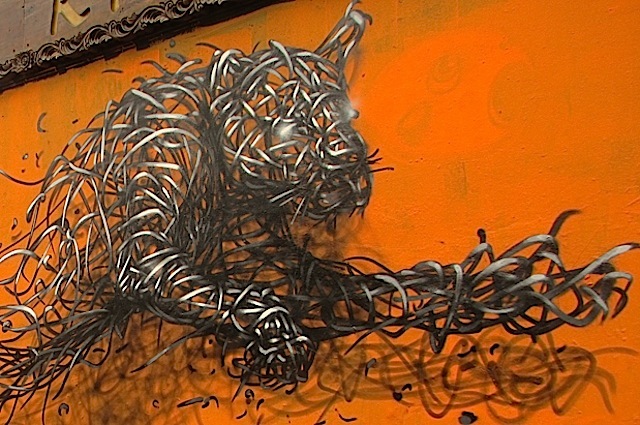 Continuing our series of short fiction set in, or influenced by London. This week, Helen Craig offers a chilling Halloween tale.

Monday September 30th
Don’t people have harvest festivals around this time of year, neighbours gathering to celebrate nature? Around here, you don’t know your neighbours. I live in Zone Three – trees, local shops – a “village atmosphere”, apparently. In a real village, I’d know the people who live around me as more than rough sketches – the Polish man next door, the Chu or Chew or Tsu family, the lady with the purple curtains.

There’s one house that’s different – the house at the end of my street. It’s dumb, but I feel like it’s a friendly house. Every evening, as long as I’ve lived here, the lights have been on. The front windows face the street, and the family inside hasn’t covered them with blinds or net curtains, like everyone else does. They’re often just gathered there, in the living room, watching TV. I think there are four of them – Mum, Dad and two kids.

The house even has its own mascot, a stuffed toy lion, usually lying in the window, but moved, every once in a while. Last Christmas, it wore a Santa hat. I like noticing when it moves — the changes feel like a connection to the seasons that pass so quickly when you live and work under fluorescent lights, coming home late every night. I wonder if they know that lonely losers like me appreciate their work?

Today, the lion’s sitting in the front window. There’s blood on its mouth. Bright red, and obviously fake. Are they starting early for Halloween? Nice.

Monday October 7th
The family haven’t been home the last week. No gathering round the TV, no lights inside the house. They could be on holiday, although their car’s still there.

The red on the lion now looks brown. There’s something nasty in the thought of that synthetic fur, matted with jam or wine that grows sticky and fetid. It’s a big beast — how would they even wash it? Then again, maybe it wasn’t brown. It was dark when I passed, and again, there are no lights.

Monday October 14th
A weekend full of work – the usual. I jogged up the hill yesterday, a steeper route, but it avoids the train station, and the house at the end of my street. Seeing it so dark makes me uncomfortable. Are the owners really the sort to just head off on a two-week holiday in the middle of October? I suppose I know nothing about them – nothing but their jokey lion, dusty yellow in the darkened window.

Monday October 21st
I didn’t want to go in this morning. The weather’s so cold and dark recently. And it’s getting hard, walking at a normal pace past the house at the end of my street. Seeing the leaves pile up in the driveway, the post hanging from the letterbox. And that lion, staring.

I know I’m being stupid. But where are they – the almost neighbours I think of as friends?

Tuesday October 22nd
I woke up last night, too hot and too cold. I dreamt of the family lying dead, still in the dark house. Stories come back to me, carbon monoxide like floodwater, food poisoning, robberies gone wrong. This is stupid. They’ve probably just moved away. Leaving everything they own, and their car…

Friday October 25th
I tried the door this morning. For a moment, I imagined someone answering – me smiling, shaking their hand, asking them anything, it wouldn’t matter, because they are there and the world makes sense.

Of course, there was no answer. And nothing to stop my head swinging round, facing the glass that separates me from the front room and the lion. Side on, you can see where the seam of the mouth is stitched, below the brown crust. Up close, there are brown lumps, and one long strand of hair. By the time I saw that, I was already running for the gate.

Sunday October 27th
Where did the weekend go? I couldn’t sleep last night, and now I feel slow, like moving is an effort. There’s still nothing in the house but that lion. My dreams have changed. In the dark, I see glittering glass eyes, stuffed ears that suddenly twitch, sharp claws sliding through polyester mesh. It’s ridiculous in daylight. Any idiot in a horror film knows you don’t trust a china doll, or a clown, but a stuffed toy? Besides, I’m not in a horror film. I just need some sleep.

Monday October 28th
I didn’t catch a train today. I couldn’t walk past that thing. I don’t know what to do.

Wednesday October 30th
I called the police hours ago. “There’s something wrong in that house. I can hear screaming.” (A lie, but much more believable than the truth.)

When they come, they walk up to the door like it’s the most natural thing in the world. I hang back, hidden from the front window. It just feels safer that way. The wind has picked up, and I can’t hear anything the two are saying. They pound on the door.

It seems to take a surprisingly short time to get into the house. They vanish quickly in the late afternoon gloom inside. The door hangs open, swinging slightly in the wind. And now it’s really getting dark. How long should a house inspection take? If I shuffle sideways from my position, I can just see round the hedge. The door is still open. There’s no lion in the window. I need to get out of here, now.

Thursday October 31st
This morning, I went back. The door still yawns on its hinges, but that’s not the worst of it. No, what’s bought me here, locked in my room, is something that would have made me smile a few weeks ago. My neighbours’ lion is back. It now lies by the front door. And it’s wearing a policeman’s helmet.