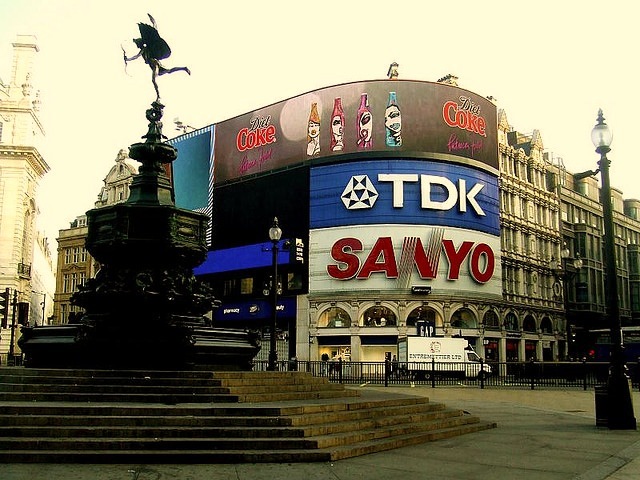 It was 1am on Christmas Day. Almost all the streets of London were quiet and still. Yet, across Regent Street and Haymarket, you could hear the panic coming from one statue in Piccadilly Circus. Eros!

It had been earlier that year when Eros, the Greek god of love who had helped so many to find their one true love, finally found his. It was the golden Queen Victoria, standing tall in front of Buckingham Palace, who finally stole his heart.

That heart was stricken at once! It ached each time he saw her; he wanted nothing but to please her. And now it was Christmas, the time of giving, and he could not think of a good gift. What could he give to someone who meant so much? A Queen, no less! Someone who has it all?

Down from Baker Street came a voice, “my name is Sherlock Holmes. It is my business to know what other people don't know. What are you searching for?”

“I am looking for the perfect gift,” replied Eros. “For in a few hours London will awake, and with it, my one true love! And yet I have no gift for her!”. He mumbled in despair, “Can you help me?”

"The world is full of obvious things which nobody by any chance ever observes," came the reply. Hardly helpful, thought Eros with dismay. If it were obvious he would already have a present!

“GOLD!” screamed Christopher Columbus from Belgrave Square. “Go west! Keep going West! Eventually you will get to India, and you will find the Ganges river, a river full of gold! All the monarchs I’ve met want GOLD!”

But Eros was unconvinced. He wanted to get Queen Victoria a gift that was more meaningful than gold. Gold seemed far too impersonal.

“Then get her marmalade,” mumbled Paddington Bear. “The quickest way to a woman’s heart, well, it’s with marmalade.”

“If music be the food of love, play on,” retorted William Shakespeare from Leicester Square.

At the sound of music, Mozart stepped in, from his perch in Ebury Street. “As long as its not with a flute! What's even worse than a flute? — Two flutes! The music is not in the notes, but in the silence between.”

But Eros was still not convinced. All these were very good suggestions but none seemed to express his emotions for Queen Victoria.

“Listen to many, speak to a few,” continued Shakespeare and so Eros did just so. He continued to listen to the statues’ advice, for time was running out! And in a few hours London would awake, and he wanted nothing more but to impress Queen Victoria.

“Weeds,” said Winnie the Pooh in London Zoo. “Weeds are flowers, too, once you get to know them.”

“Fairy dust! Second star to the right and straight on 'til morning,” yelled Peter Pan from Kensington Gardens.

“Or a bridge,” said Isaac Newton. “We build too many walls and not enough bridges.”

But there was almost no time left. The sun was beginning to rise and Eros was none the wiser.

“Good night, good night! Parting is such sweet sorrow, that I shall say good night till it be morrow,” said Shakespeare.

And slowly London began to awake. With hugs and presents, the streets were coming alive again.

Now in desperation, Eros looked out to the distance and he thought he would cry. He was empty handed! He had no gift for the love of his life. And so he looked out at his mother, Aphrodite, also known as Venus. She lay naked in Broadgate looking up to the sky! And seeing his mother, Venus, the Goddess of love, look up at the sky, he thought of the perfect idea.

Eros grabbed his last golden arrow and with his bow aimed at the sky! And immediately heart shaped snow flakes began to fall from the sky. Slowly the city was covered in heart shaped snow, and love filled the air.

“This is the best gift I have ever received Eros! It’s London in LOVE!”

Editor's postscript: around the time this story was published, it was reported that the plastic bubble surrounding Eros has been punctured, after the statue's bow pierced the membrane. That's Christmas magic in action right there, folks.

Copyright, Katherine Wheston, 2013. Image of Eros, all alone on Christmas Day, by M@.

**Pedant's note: yes, we know very well that the statue of Eros is not actually meant to be Eros, but this is Christmas, when anything is possible!