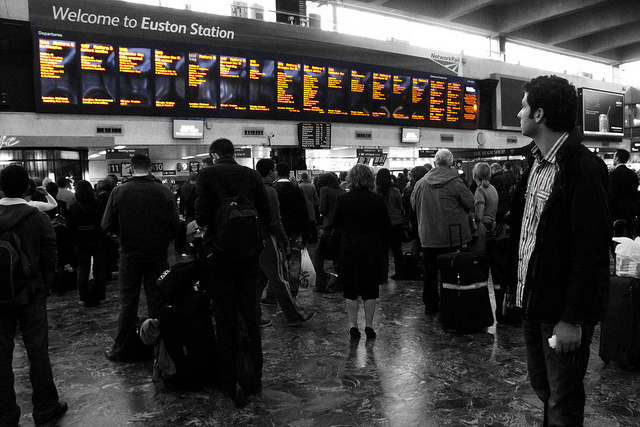 Continuing our series of short fiction set in, or influenced by London. This week Peter Watson takes a slow walk to Euston.

She was telling me, again, about the house. About how, from the kitchen window, you could see the moorland stretch out, and with the window open you could hear the stream, or the grasshoppers in summer. About the station clock she’d installed on a post at the end of the garden, and the ivy that entwined itself around it, and the air. Apparently there was something special about the air. I found it impossible to picture it all on the dark street, though the distant traffic could have passed for the sound of a stream.

‘We should take the tube, I’ll miss the train.’ She’d broken off her description and was looking at her watch through the crook of my arm. We were on Seymour Street, near Cavendish Square Gardens. Her train wasn’t for 40 minutes.

It was more of a heavy mist, carrying the glow of the streetlights up around the buildings and leaving a slick film on the tarmac which took on, for an instant, the imprints of the tyres on the passing cars. There were a few people on the pavement, mostly alone and looking down, sometimes in twos or threes, but no group, or no two individuals, ever acknowledged each other. The air here was special too, in its way. The soft rain gave it the illusion of freshness. Small pockets of dry air occupied the spot-lit window displays of the closed shops — art shops, jewellers — shops that were mainly empty space, that made the cut stone of the Georgian houses they occupied seem absurdly overbuilt. I imagined the boozy air of the bars, and the cold air hanging over the river and the bridges. I thought of the air in the trains below us, full of hot breath and condensation, and, even there, the unifying fumes that cut through the city.

I asked her to repeat what she’d been saying, and a flicker of annoyance crossed her face.

‘We can’t keep putting it off.’

‘You mean I can’t keep putting it off.’

‘We agreed to live together.’

‘We will.’ I pulled her close against me. I felt shielded by my coat; there was something armour-like about wearing a coat at night. However close she was I felt protected and isolated. I could say anything, so I said, ‘There are some things I need to sort out here, then I’ll come.’ She pressed her head against my shoulder. I looked up at the details and relief carved below the guttering that ran the length of the street. Just one stone must have taken an age to finish. The previous generations had stacked up thousands of them into these buildings, made each a museum distinguished in its style by area and year, showing how the fashionable districts had bloomed and died and bloomed again, and the poor areas had spread and bedded in, mainly to the south and the east. (I had a sudden compulsion to walk there, where it was livelier.) I tried to imagine the cumulative effort in building the city, and it was difficult to make even myself seem significant, let alone an irritating personal problem.

‘I can’t wait,’ she said, and I felt her warmth pass through my coat.

We exited Howland Street onto Tottenham Court Road, by the school of architecture, when two cars crashed in front of us. They pulled out at the same time and collided at 90 degrees, and one of them was pushed into a parked car which began to sound its alarm. At most they came within about three metres of us before stopping, and then the drivers burst from their darkened interiors and started shouting at each other. I froze, and reflexively tightened my grip on her. I didn’t push her behind me, but held her exactly next to me, my arm locked so she couldn’t move. I hadn’t meant to put her in danger, but perhaps I had. She took hold of my arm and freed herself, and we continued walking.

‘Are you okay?’ I studied her face.

‘I’m fine. This place is full of surprises.’

‘No, it’s fine,’ she said, but I wasn’t sure she meant it. I had to lengthen my stride to keep up with her. I put my arm around her, but as we were no longer in step it was difficult to keep it there.

‘I really do want to go to the house,’ I said. She glanced at me.

‘Yes, well, it sounds beautiful, much better than here.’ We’d broken out onto the soulless strip of Euston Road. I pressed on.

‘It’s not as though I’m in love with living here.’ She relaxed her grip on my arm and turned to face me, slowing her pace.

‘No, I don’t think you are. But I’m not sure you can stop.’ She didn’t say anything else, but I felt her move once more against me, and her breath against my cheek. We slowed as we approached the station, leaning on each other, lingering. I started to formulate ways of asking her to stay, but none of them seemed convincing. The station clock indicated it was nearly time. She asked me to go with her. Come with me, she said, stay, just for a bit, a week, buy a ticket. The rain had soaked through my clothes, I realised they were wet against my skin. Overheated, foul smelling air blasted out of a shop and misted up my glasses, unmistakably city air.

I smiled, and said what I needed to, and kissed her on the cheek. I watched her walk across the concourse. If she turned, she did so after me, when I was walking back, tightening my coat, waiting for the lights. I thought I might walk all the way. I was already wet, and I was in no hurry.