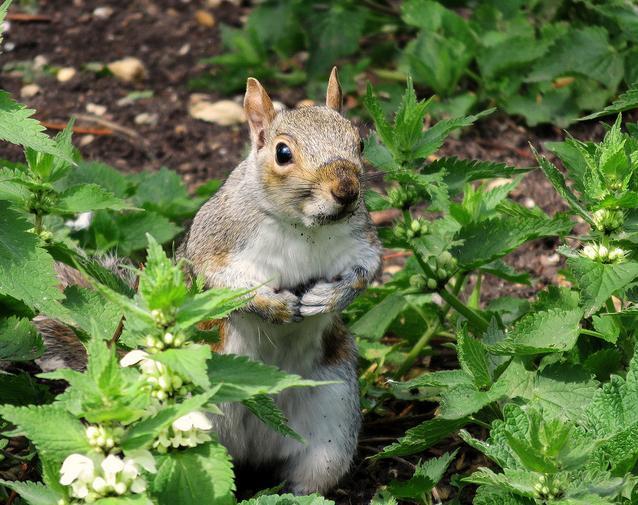 Continuing our series of short fiction set in, or influenced by, London. This week’s story of squirrels is by Alex Tomlin.

Cara walked through St James’s Park, wondering whether she could afford a new pair of Jimmy Choos. Probably not, she concluded, but she didn’t mind. She loved London like this. The sun low over the trees, glinting off the roof of Buckingham Palace and illuminating the faces of tourists ambling through, taking pictures of trees, the lake, ducks, even squirrels. What was the fascination with squirrels?

A small child sat on a bench holding a crisp out to a squirrel which darted forward to grab the crisp. It nibbled its way through it then hopped up and down squeaking plaintively. Around them the child’s family clapped, squealed and took pictures.

Cara watched them, wondering idly where they were from. Spain maybe? Or Italy? Clearly somewhere they had never seen a squirrel. A movement caught her eye. One woman’s pocket was twitching. As Cara watched, a furry head poked out, looked round quickly, bobbed back out of sight then quickly re-emerged followed by a lithe body then a bushy tail. The squirrel leapt to the ground, the woman’s wallet clamped firmly in its teeth, then scampered away.

Cara stared, amazed, and then increasingly indignant, as several more squirrels emerged from various pockets, handbags and rucksacks, gripping purses, chocolate bars and a packet of cigarettes. They all ran over to a clump of bushes in a darkening corner of the park.

Cara approached the bushes and peered in. She couldn’t see anything. As quietly as she could, she eased into the middle of the bushes.

Inside was a small clearing. Squirrels ran back and forth carrying food, sorting it into large piles in front of what looked like a plastic sandwich wrapper lined with a woollen scarf. Lounging on the wool was the fattest squirrel Cara had ever seen, observing proceedings with sharp eyes.

Cara took a step back in shock. A branch snapped beneath her foot and the scene in front of her froze, dozens of squirrels staring up at her, shifty looks on their tiny faces. The fat one seemed to slump a little in his chair. He tiredly beckoned her in with a chubby paw.

Nervous but made brave by anger, Cara stepped into the clearing and looked round at the assembled creatures. “How could you steal from those people?” she cried. “They’re here on holiday, just trying to have a good time and you’re ruining it for them. You’re making my city look bad. Well, what have you got to say for yourselves?”

The fat one regarded her solemnly then made a gesture. One squirrel brought him a cigarette and put it in his mouth and two others operated a lighter. He leaned back, holding the cigarette in both paws. The end of cigarette glowed red and he exhaled slowly then said in a deep, raspy voice, “Okay guys, explain to the lady”.

In a blur of grey the squirrels gathered in the centre of the clearing. One tapped its paw on the ground, one, two, three, and as one they broke into song.

A squirrel’s life is awful hard
Give us an inch, we’ll take a yard
No one looks after us squirrels
They say we are vermin and pests
We all have to look after each other
So please lay off your protests

Despite herself Cara found herself tapping her foot in time as the song continued.

A squirrel’s life is terribly tough
That’s why we have to steal this stuff.
Those tourists have money
Coming out of their ears
They can spare a few quid
So please save your tears
A squirrel’s life is nothing but trouble
So no one’s going to burst our bubble
If we don’t help ourselves
We’ll starve, thems the facts
We all need to eat
So please mind your beeswax

Cara clapped delightedly. What a tune. Then she remembered how angry she was. “It’s wrong to steal. I’d like you to stop. And smoking’s no good for you either.” She whipped the cigarette out of the squirrel’s mouth and threw it away with distaste.

The fat squirrel bristled. “Look missus, you seem like a nice lady, and I like what you’ve done with your hair,” Cara blushed and patted her hair self-consciously, “but this is really none of your business”.

“Well,” Cara said, narrowing her eyes and fixing the squirrel with her best mean look, “we’ll see about that”.

She turned on her heel and stormed off, humming, “A squirrel’s life is terribly tough…”

The next evening found Cara back in the park. She stood guard by the bench, waving squirrels away from pockets and bags, trying to ignore the strange looks she was receiving from the tourists. She bobbed and pounced, rebuffing the grey invaders. Finally one defeated squirrel brought her a message. The chief wanted to see her.

“I’m going to keep doing this until you stop stealing,” she told him.

He sighed. “You’re taking away our livelihoods here, lady. How do you expect us to survive?”

He had a point. She didn’t want to see them starve. Cara thought hard then suddenly her eyes lit up.

Cara listened to the applause from the audience inside as she gazed proudly upon the freshly painted sign: Cara’s Tremendous Troupe of Performing Squirrels. Singing, Dancing and Acrobatics to amaze and astound. Tickets: £15.”

Once more she counted the money and smiled. This would buy a lot of shoes.

Got any more stories about London’s green spaces? Send them to fiction@londonist.com. Entries must be no more than 1,000 words, and must be set in London, or strongly inspired by the city. Full details here.