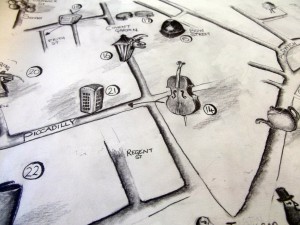 This week's map takes a theme we've previously explored in Google Maps: London inventions and 'firsts'. The map's creator, Julia Forte, is something of a London aficionado and runs the London Peculiar website, which specialises in historic memorabilia relating to the capital.

Her map includes such notable human achievements as the world's first oxtail soup and Wellington boot alongside better known events such as the first television broadcast and first police force.

By way of contrast, here's our own Google map showing London inventions:
View Invented In London in a larger map

As a light pencil sketch, Julia's map is a little hard to make out online. However, you'll be able to view the real thing, alongside 10 other maps from our series, at our upcoming exhibition at the Museum of London.

Although entries for that exhibition are now closed, we'll continue to publish new maps on Londonist. Please have a look through our archive (see below) and send your handiwork to tips - at - londonist.com.