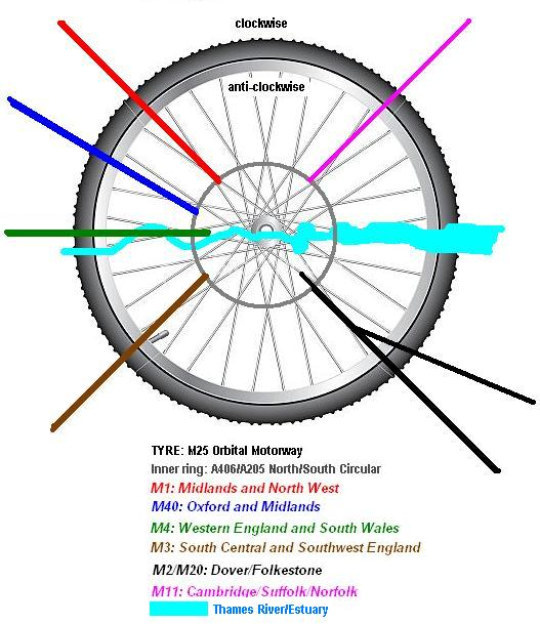 I think you’re looking for parts of London, but I thought I would draw the “mind-map” of London I developed in my first year after arriving as a rural Irish greenhorn in that astounding metropolis. Can you imagine what London felt like to a nineteen-year-old farmer’s son from Co. Tipperary whose nearest small village was three miles away? Whose nearest neighbour was half a mile?

Years later, I sketched this for a friend who had to travel the southeast a lot, but couldn’t get the hang of navigating London. “It’s like a bicycle wheel”, I told him. “The M25 is the rim and the motorways are all spokes radiating from the centre. You can’t get hopelessly lost. If by chance you pick up the wrong motorway, just go round the circle until you come to the spoke you want”.

We're still after further maps, be they conceptual images of the whole of London, like Pat's, or simple sketches of local areas. No drawing skills necessary, as long as the map is thought-provoking, fun or unusual in some way. Send entries to tips@londonist.com.