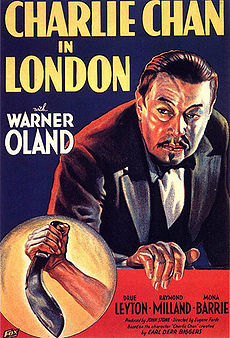 We were totally prepared to dislike this film. It stars a white Swedish man as a Chinese detective from Honolulu. Please. That’s insane. But, of course, in 1930s Hollywood, casting an actual Asian man as the lead in a film would have been pure madness. Warner Oland is a good actor (and one we’ve seen before), and you do get used to his sentence fragments ("Excuse silent movement. Habit of profession") even though we don’t think anyone as fluent as Chan seems to be has ever actually spoken like that. That being said, we actually enjoyed this film quite a bit. It’s a pretty good mystery, and kept us guessing right up to the end.

It's too bad virtually none of it is actually set in London. The film starts with Paul Gray (Walton) in Pentonville Prison, where he’s days away from being hanged for a murder he didn’t commit. His sister Pamela (Leyton) and his former employer Richmond (Mowbray) are the only people who believe in his innocence, and enlist visiting Chinese/Hawaiian detective Charlie Chan to help prove his innocence. Chan has three days to find the real murderer and keep Gray from being executed.

Gray, who worked as Richmond’s hunt secretary, is accused of murdering a guest at Richmond’s country house, who is conveniently having another party with all the same guests, which allows Chan to interrogate them. Richmond’s house is in Retfordshire, which we believe is fictional. There are several suspects, including a perpetually drunk man named Bunny who we enjoyed, and a shifty looking butler. What’s a murder mystery without a suspicious butler?

The first ten minutes of the film are in London, and the rest is at the country house (and the amusingly named Farnwell Aerodrome - why don’t they have aerodromes these days?) where the investigation takes place. And, of course, this was the thirties, so everything is shot on a soundstage, except one fox hunting scene in the country. There is one shot of the real London over the opening and closing credits. That’s the only actual London you’ll see in this film.

Still, we liked it. We won’t spoil the ending, but we assure you, it’s very unlikely that you’ll see it coming. We even liked it so much that we’re going to take the racist casting as a product of its time, and be mildly amused by it rather than deeply offended.