After a brief break, Londonist Film Club is back, looking at films with one thing in common: London. Our only rule is that the films must have either the word London or a London place name in the title. Other than that, any film is fair game. 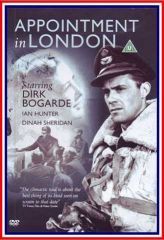 This film takes the prize for the least time spent in London, in all our London-named films. We congratulate it! Appointment In London tells the story of a group of RAF pilots flying bombers in WWII.

Tim Mason (Bogarde) is the wing commander, and has flown 89 missions. He, along with two other pilots, are being awarded the DFC, and have an appointment to collect their medals at Buckingham Palace in a month’s time. (And no, we didn’t know what a DFC was either. We suppose in ’53, these were common knowledge, but we had to do a Google, and we discovered that it’s the Distinguished Flying Cross, which is kind of a big deal.)

The whole film focuses on Mason’s mental well being, and his fitness to fly. Can he make his final mission? Will he get together with the pretty intelligence officer?

Which is all well and good, but it all takes place in Lancashire. Mason, his surviving fellow pilot, the missing pilot’s widow and the pretty intelligence officer don’t make it to London until the 1:29 mark in the film. They get in a cab, drive to Buckingham Palace and the film is over two minutes later. Two minutes in London. For a while there, we really thought they weren’t going to get there at all though, so we’ll take our two minutes.

This is a great war movie, and kept even this non-fan of war films entertained (once we figured out who was who. It’s hard tell hundreds of men in uniform apart!). Not really a great London film, though. But still, worth a watch.