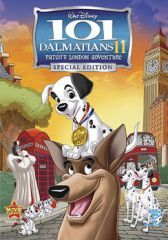 We’d actually forgotten that 101 Dalmatians was set in London, so it’s really not surprising that its sequel is also. This is a straight to video sequel to the 1961 animated film, and it’s very much what you’d expect from a straight to video sequel. The characters from the first film are all there, the animation isn’t great, the story is a bit predictable, and most of the "British" voices sound pretty American to us. But for a kids film, it’s actually not that bad. And it’s certainly not the worst animated sequel we’ve seen. It’s probably best not to get into the fact that we’ve seen more than one animated sequel.

The family (which consists of Roger, Anita, their nanny, their two dogs, and ninety-nine puppies) are moving from a London flat to a farm in Devon. That’s really a good thing, as we can’t think that the RSPCA would be okay with so many dogs in one flat. Patch is one of the 99 puppies, and he’s having a bit of an identity crisis, and is worried that he’s "one of 101, not one of a kind". He’s a fan of an American TV show starring a heroic dog named Thunderbolt. We’re unsure of whether or not a British family in the 1950s would be watching American television, but we’ll let that slide.

Patch throws a bit of a strop because he doesn’t like sharing a bedroom with one hundred other people. Who hasn’t done that once or twice? Because he’s sulking, he misses the moving van to Devon. Silly Patch. He decides to try out for a competition to appear on his favourite TV show, since he’s got a bit of time on my hands.

Oh, and of course, Cruella De Vil is there. She’s found an artist that paints paintings of black spots on white backgrounds, and decides to become his muse. She spots Patch in the paper at the auditions, can apparently read the writing on his dog tag in a newspaper photo and heads to Devon to steal the other puppies. You know, to make art out of them. Because that’s not deeply creepy at all.

Patch manages to save the other puppies and get Cruella arrested, proving that he really is "one of a kind". Awwwwww.

There’s also a whole plotline involving Thunderbolt, the fact that he thinks he’s getting fired from his show, his traitorous co-star L’il Lightening, and his TV show, but that’s really not very interesting.

For the most part, this film could be set anywhere, but there is one key London-y element in the film: the puppies steal a Routemaster and drive it (themselves) through London, while being chased by the bad guys. And there’s your fact for the day: puppies can drive buses.

We definitely wouldn’t recommend this film, unless you’re under ten. If you happen to be under ten, it’s probably a very good time.